Explore the rainforest locations in the world with this Rainforest World Map. This colored, blank, and outline map showing rainforests shows rainforests between 0° and 30° of both the hemispheres. These rainforests are the richest biodiversity zone in the world. The most popular rainforests in the world are located in South America’s Amazon Rainforest, Africa’s Congo Rainforest, South Asian Rainforest, Malaysia’s Kinabalu National Rainforest, Sri Lanka’s Sinharaja Forest Reserve, and many more. Whether you are looking for a blank, outline, printable, or customized world map with countries and international borders, you’ll find everything of your choice at MapOfWorld.com. 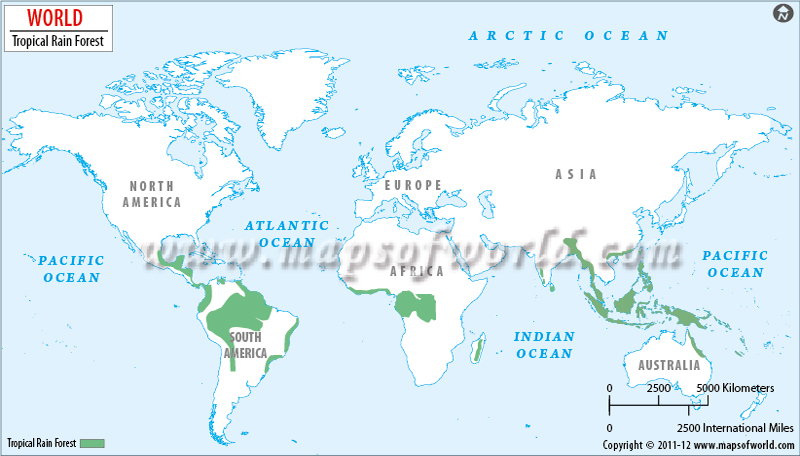 Rainforests are mainly of two types:

Tropical rainforests are called the world’s largest pharmacy or the jewels of the Earth because over 1/3rd of all the natural medicines are found here. These forests are characterized by the fact that there is no dry season and the average rainfall is at least 60 mm (2.36 in).

You can find the rainforests from 10° north and south of the Equator. These forests belong to the tropical forest biome, which occurs within the 28° latitudes, which is located between the Tropic of Cancer and Tropic of Capricorn in the equatorial zone. Tropical rainforests are categorized as tropical moist broadleaf forests including the more extensive seasonal tropical forests.

The 2 largest and most popular rainforests in the world are:

Amazon Jungle or Amazonia is the largest tropical rainforest in the world. It is spread across a total area of 5,500,000 sq km (2,123,562 sq mi), covering most parts of South America’s Amazon Basin. It runs through Brazil, Bolivia, Ecuador, Venezuela, Colombia, Peru, French Guiana, Suriname, and Guyana.

As per estimates, there are around 390 billion individual trees, belonging to 16,000 species, in the Amazon rainforest. Besides tens of thousands of plants, you can find 2.5 million insects and around 2,000 birds and mammals. In the region, 438,000 plant species of economic and social interest have been found. The major predatory species found in this rainforest are anaconda, cougar, and jaguar.

It is the second-largest rainforest in the world, which is spread across a total area of 1,780,000 sq km (687,262 sq mi). Congo Rainforest is spread over a large part of Northern Congo in Central Africa. The Congo River, the 2nd largest river by volume that drains an area of 3.7 million square kilometers or 1,428,578 square miles, runs from within it.