What are the countries having most gun owners? - Answers 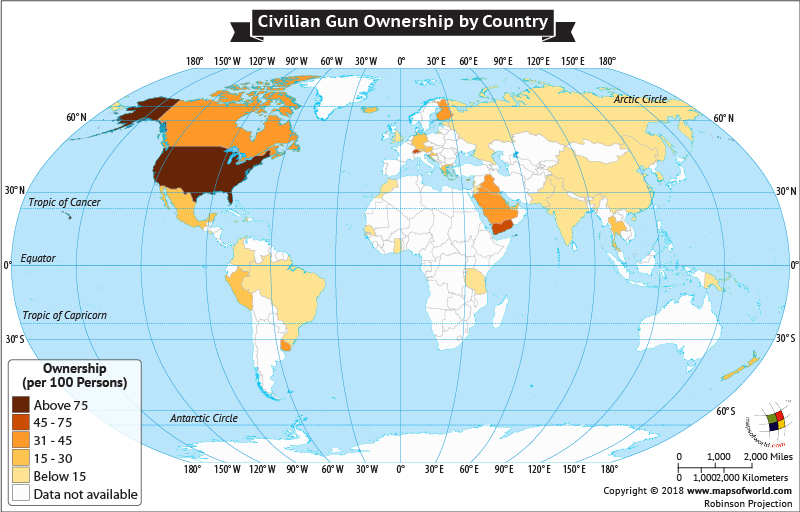 There are several nations around the world where civilians can easily obtain firearms. It has been estimated that there are about 650 million gun owners across the world.

As one might have predicted, the United States is the number one nation when it comes to civilians owning a gun. According to data by the Small Arms Survey; 89 out of every 100 people, in the US own, or have owned, a firearm. In fact, the high level of casualties from firearms sparked a debate in the country for tighter gun laws.

Other countries with most gun owners

In second place was Serbia, where around 75 people out of every 100, own a gun.
Yemen holds the third position where almost 55 civilians per 100 people owned a firearm.
Switzerland is the first in Europe in terms of the number of civilians owning a firearm. According to the data, in this picturesque European nation, some 46 people out of 100 owned a firearm, while in Finland the numbers stood at 45 per 100 people.
Apart from Finland, other countries where between 31 and 45 civilians per 100 owned a firearm included; Cyprus, Saudi Arabia, Iraq, Uruguay and, Canada. Meanwhile, nations where civilian gun ownership stood between 15 and 30 per 100 are; Germany, Kuwait, New Zealand, Greece, United Arab Emirates, Croatia, Lebanon, Qatar, and others.

The countries that occupied the bottom slots on the Small Arms Survey were; Jordan, Pakistan, Russia, China, India, South Korea, Morocco, and some other nations. In these nations the civilian gun ownership was less than 15 per 100 people.