What countries do not have rivers? - Answers 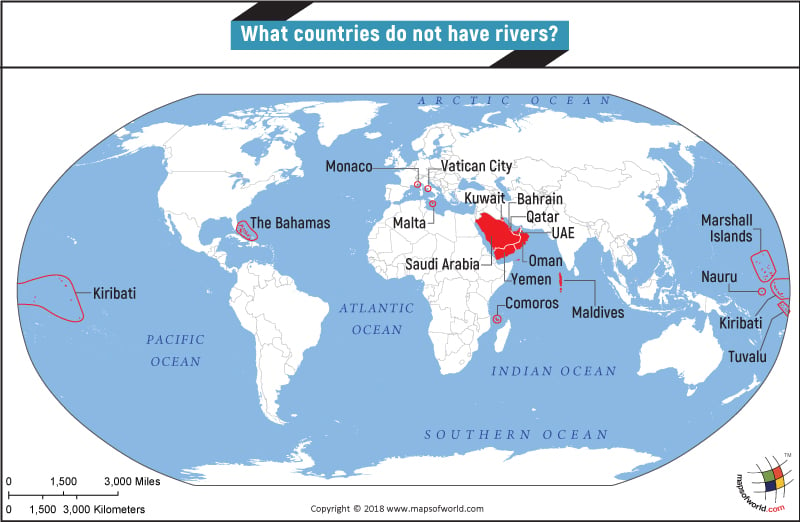 Country with no River

There are 17 countries without rivers running within them.

Globally, 18 of the largest rivers are under water-loss stress. These rivers are losing 80% of their water flow each year. The Tigris-Euphrates river basin that feeds large parts of Syria and Iraq is drying up quickly. Capetown in South Africa has lost its natural underground water supply this year (2018). Qom River in Iran has been declared the most stressed river by Water Research Institute out of 18 most stressed rivers in the world.

Erratic to no rainfall in many parts of the world has brought increased focus and attention to water conservation and management, water resources allocation, water distribution, rainwater storage, and recharging of groundwater aquifers.

Which is the largest country without a river?

The largest country without a river is Saudi Arabia with a land area of 830,000 sq. miles (2,149,690 sq km) of which 95% is desert. The average temperature in the summer months hovers around 113°F (45°C), and many parts of the country have not received any rainfall for several years. All water collected is stored in underground aquifers. Saudi Arabia meets its drinking water requirements from the following sources:

50%: processed from desalination of sea water
40%: drawn from the non-renewable groundwater
10%: collected from surface water in the mountain regions

Most countries in the Middle East noted below rely on desalinated water to meet their drinking water requirements. Some of them have natural rainwater stored for a few months in the wadis or valley, but water levels remain limited due to the irregular weather patterns.

Which is the smallest country without a river?

The smallest country without a river is Vatican City with a land area of 0.171 sq miles (0.445 sq km). It has no lakes, rivers or mountains and depends on Italy for its water supply.

Visit the following to learn more about Rivers and Lakes: