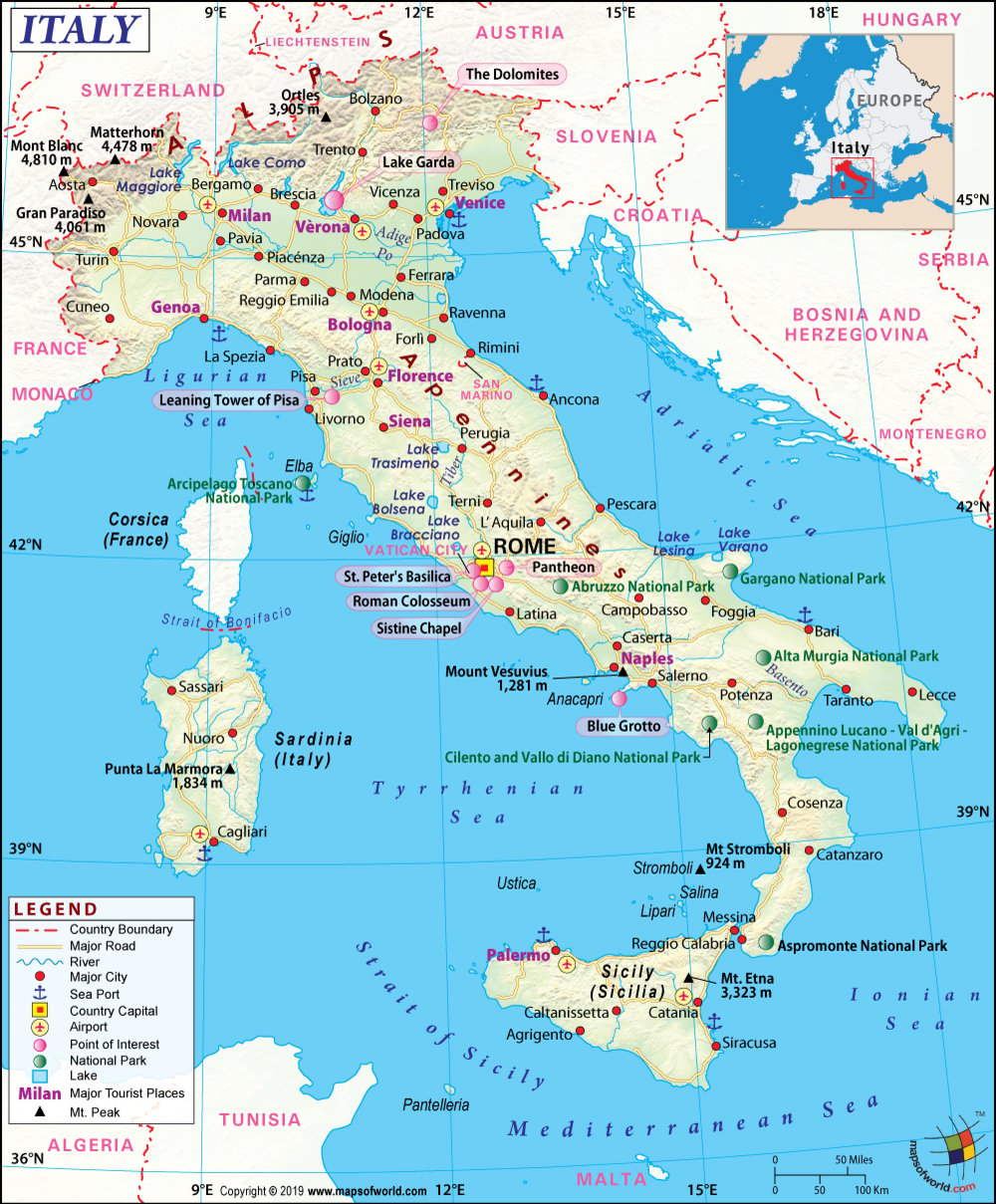 Italy, formally the Italian Republic, is the peninsular country in south-Central Europe. The country is bounded by the Mediterranean, with the Tyrrhenian Sea in the southwest, the Ionian Sea in the southeast, and the Adriatic Sea to the east. The country covers the total area of 301,230 km2 (116,310 sq mi) of which 294,020 km2 (113,522 sq mi). It is a beautiful country with green valleys like Lombardy and mountains like the Apennine. The country is home to two great civilizations, the Roman and the Etruscan Civilizations. Known for its tradition and Culture, Italy is a predominantly Roman Catholic Country. The country’s official language is Italian, but a minority also speaks French and German of the population in certain regions.

One can explore mapsofworld for more details about the national flag of Italy. The Italy flag is a tricolor flag consisting of three equal and vertical bands. The flag hoist side has a green band; white forms the center band, and the outer band is red. The red and white parts of the Italy flag were borrowed from the official colors of the Milanese flag, and green was added to represent the Civic Guards of Milan. On January 7 each year, Italy celebrates flag day. The interpretations of the Italian flag’s colors are as follows:

Italy Location Map shows the exact location of Italy on the world map. The country is located in southern Europe, comprising the Italian Peninsula and several Islands. The map shows the boundaries of this country, neighboring countries, and oceans. Italy shares borders with other countries: France, Austria, Switzerland, and Slovenia. The country also surrounds two landlocked countries, Vatican City and San Marino.

Rome is the capital city of Italy, located in the central-western portion of the Italian Peninsula within Lazio (Latium), along the shores of the Tiber. Due to its geographic location, Rome is often referred to as the City of Seven Hills and also the” Eternal City.” The Capital City of Italy is generally considered the” Cradle of Western Civilization” and Christan Culture” and the center of the Catholic Church. Rome is also the Capital of the Lazio region, the center of the Metropolitan City of Rome, and a particular commune named Comune di Roma Capitale. Rome is the country’s most populated commune and the third most populous city in the European Union.

The physical map of Italy has all the valuable details about the topographic features of Italy. The country is boot-shaped, with the Italian peninsula extending into the Mediterranean Sea. The Mediterranean Sea surrounds Italy on three sides, giving it the picturesque beauty as seen on the Italy map. The country has various topographical features and prominent mountain ranges: the Apennines and the Alps. The longest River in Italy is the Po River. Italy mostly has a rugged and mountainous terrain. The Apennine mountain range surrounding the country’s northwestern region is considered the country’s backbone and the Alps form the country’s northern boundary. Other than mountain ranges, Italy has several Islands, Hills and Plains. The country is home to over 1000 lakes, including lake Maggiore, Lesina, Garda Lake, and more.

The History of Italy dates back to 40,000 years, when modern humans arrived on the Italian peninsula. Etruscans inhabited the region. During the 17th and 11 centuries BC, Mycenaean Greeks came, and in the seventh and eighth centuries BC, they established colonies in the south and Sicily. After years of invasions, the Italian peninsula was split between the popes, whose supporters were the Guelfi, and the  Holy Roman Emperors, whose supporters were called the Ghibellini. The struggle for power between the two parties led to the division of the Italian peninsula. From 965 to 1072, Sicily was conquered by the Arabs.

In the mid-sixteenth century, the Italian Renaissance reached its peak. The city-states in northern Italy became larger, more vital territories called Signoria (regional states). The largest states that emerged were Milan, Florence, and Venice, which agreed to the peace treaty (the Peace of Lodi in 1454). The treaty lasted for forty years. The la

The provinces of Italy, since 2015, have been classified as the” Institutional bodies of second are the second-level.” The second-level administrative divisions of the Italian Republic are on an intermediate level between a municipality (compute) and a region. (regions). Currently, 107 institutional bodies of the second level in Italy, including 80 ordinary provinces, six free municipal consortia, two autonomous provinces, four regional decentralization entities, 14 metropolitan cities, and the Aosta Valley region. Italian province is composed of many municipalities. You can check this Italy Province Map to learn more.

In Italy, Postal Service is managed by Poste Italiane. Italian Postcodes, commonly known as CAP (Codice di Avviamento Postale), are five digits long numeric systems. The first two digits indicate the administrative province, the third digit shows if the town is the province’s chief town or not, and the last two digits are the specific town or village or the delivery post office. The main cities like Milan, Rome, Naples, and Venice, and the last digits designate the urban postal district.

With 59 UNESCO World Heritage Sites, Italy is one of the most visited tourist destinations in the world. Italy is known for its picturesque scenery, and travelers from around the globe visit the country. The popular tourist destinations are depicted on the travel map of Italy. The most famous tourist attractions in Italy are:

Ans:  Italy is a European country and is part of the European Union and the Council of Europe.

Faq #2: What Is The Capital Of Italy?

Ans: Rome is the capital city of Italy.

FAQ #3:What type of government does Italy have?

Ans: The government of Italy has been in the form of a democratic republic since June 2, 1946, when a popular referendum abolished the monarchy. A constitution established it in 1948

Faq #4: When did Italy become a country?

Ans: The United States officially recognized the Kingdom of Italy on April 11, 1861.

FAQ #5: Who was the leader of Italy during World War 2?

FAQ #6:When was Italy founded?

FAQ #7:Where is Italy located?

Ans: Italy is located in the middle of the Mediterranean Sea in Southern Europe.

FAQ #8: How many regions are in Italy?

Ans: Italy is divided into 20 administrative regions, which generally correspond with the traditional historical region, though not always with precise boundaries. Check Maps of Italy Region to learn more.

Ans: Italy is famous for its tourism, unique scenery, and art cities. The country is known for its language, fashion, opera, and much more.

Ans:  Italy covers a total area of 301,340 square kilometers and is the 72nd largest country in the world.