What are the years of compulsory education across countries? - Answers 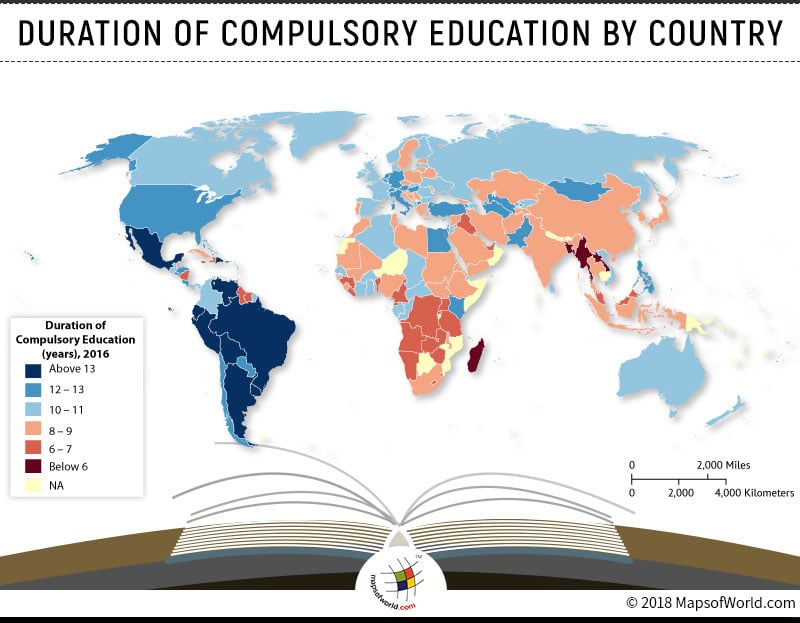 The fundamental resource for the prime development of both individuals and societies is the provision of education. It is not only a right of a citizen to attain minimum level of education but is also a duty of the government to make education available to its citizen. The elucidation of key dimensions of the right to education helps us address the cardinal requirement of free and compulsory education. Varying from country-to-country, compulsory education refers to a period of education that is required of all people and is implemented by the government of the respective nations. The multi-lateral treaty of International Covenant on Economic, Social and Cultural Rights, adopted by the United Nations, requires the imposition of compulsory education free of charge for all, within a number of years.

From a historical perspective, trends can be seen towards a great expansion in the rate of education, over the last two centuries. The global literacy rates have been on a rise, due to the increasing rates of enrolment in primary education. Additionally, the secondary and tertiary education has also been relatively improving. Despite the crisis-driven education acceleration in the 1990s, the millennium saw a step towards improvements, while a few regions still fronted challenges.

The production of education patterns across the globe show that schools are largely financed through public resources and revolve around funding. The domestic and international levels being discretionary in nature are separated by an abyss. Certain nations have effective constitutional provisions guaranteeing primary education whereas others lack the sources. Estimates depict that a few nations have also been successful in rendering free secondary education to its citizens. This difference in national expenditures on education sector is reflected in the level of per capita income and economic development of that nation.

The international key treaties throw light on the global importance laid on education, as an essential right for quality living. The Universal Deceleration on Human Rights (1948), states that the education shall be free, at-least in the elementary and fundamental stages, and elementary education should be made mandatory. The UNESCO Convention against discrimination in education (1960),  mentions the state parties to this convention undertake to formulate, develop and apply a national policy which will promote equality of opportunity and treatment to make primary education free and compulsory.  The ICESCR (1996), The Convention on the Rights of the Child (1989), confirms that the state parties recognize the right of the child to education and with a view to achieving this right progressively and on the basis of equal opportunity, in particular to making primary education compulsory and available free for all.

Due to the efforts made by the countries collectively, a transition has been witnessed in the education rates. In 1820, four out of five people had not received formal education, this has substantially improved to one out of five individuals deprived of education, in the past century. Whereas the developing countries still confront the challenge of education attainment at primary levels. The net enrolment rates have risen but is not reflected in the attendance rates. This shows that the children have been officially enrolled but do not attend schools. This is evidently prevalent in the low and middle-income countries of  Africa and Sub-Saharan Africa- Niger, Chad and Liberia  depict less than half of the school-aged children attend primary school.

Countries like  Dominican Republic, Ecuador and Tonga,  have the highest number of compulsory education years, declared as  15 years. Ratifying to all UN human rights treaties without reservations, Dominican Republic guarantees free and compulsory education to its inhabitants. In addition to these terms, the country of Ecuador has also ratified to all the regional treaties and guarantees free, compulsory and all-encompassing education.

Below lying table shows the countries and the guaranteed years of compulsory education: