What are some of the world's most endangered species? - Answers 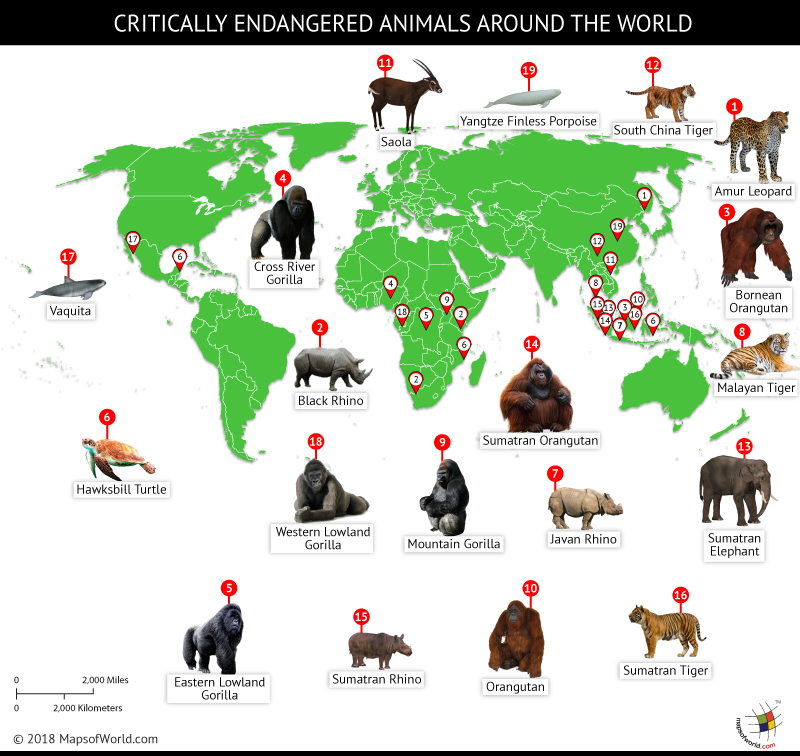 The international organization of IUCN officially called  International Union for Conservation of Nature and Natural Resources,  works in the field of nature conservation and the sustainable use of natural resources. It is the world’s oldest and largest global environmental organization. Featuring a member strength of 1,200 organizations, it includes 200 governmental and 900 non-governmental organizations. Headquartered at  Switzerland, the prime mission of the IUCN is to “influence, encourage and assist societies across the world to conserve nature and to ensure the use of natural resources is equitable and ecologically sustainable.”

One of the main areas of the function of the IUCN is the compiling and publishing of the  IUCN Red List of Threatened Species. This widely known publication helps in assessing the conservation status of the species worldwide. Also called the  Red Data List, the comprehensive inventory uses a set of criteria to evaluate the risk of extinction of all the species on the face of earth. Recognized as the most reliable and authoritative guide to the status of biological diversity, the countries and organizations produce Regional Red Lists, for a political management unit.

While the category of each specie is re-evaluated every five years, efforts are made to conserve and sustain the threatened species. The goal of the Red Data List is to not only provide scientific based information on the status of the species and subspecies but to direct attention to the magnitude of the problem and to influence national and international policy-making as well as guide the actions towards conservation.

The  IUCN Red Data Book, mentions about the threatened species, which are vulnerable to extinction in the near future. This categorization depends on the  rate of decline, population size, area of geographical distribution, level of population, distribution fragmentation and degree of threat faced by the respective species. Hence, all species can be placed in to seven groups, suiting best to the factors associated.

Endangered species,  is the second most severe conservation status for wild populations in the IUCN scheme. It is the type of specie that is highly likely of becoming extinct in the near future. This could be due to the change in the environmental conditions, change in habitats and predation parameters. A total of 50% of the world’s species are considered to be at the risk of extinction. A taxon is endangered when the evidence indicates a reduction in population size greater than or equal to 70% over the last 10 years or three generations.

Global efforts have been made in this direction, in order to save these species from going extinct.

The Biodiversity Action Plan, was recognized as an international plan addressing the threatened species and habitats, and focuses to protect and restore the biological systems. A total of 199 countries have signed to this accord, the principle elements of which includes: producing inventories of biological information for species and habitats, assessing the conservation status with the respective ecosystems, creation of target for conservation and restoration and establishing budgets, timelines and partnerships for the successful implementation of BAP.

CITIES (the Convention on International Trade in Endangered Species of Wild Fauna and Flora),  is a multilateral treaty which aims to protect the endangered plants and animals. The draft owes its existence to the resolution adopted at the meeting of members of the IUCN. The motive of the CITES is to ensure the international trade in specimens of wild animals and plants does not threaten the very survival of these species in the wild. The treaty also establishes the authorization of a licensing system to import, export, re-export and introduce from the sea of species covered by the convention.

Currently there is a dire need to protect these species. Losing a single specie has tremendous impact on the whole ecosystems. This not only affects the food chain but reflects the bad health of the ecosystem. The inter-dependence and close linking of the species triggers the need to save the smallest of species as it can foster the process mass-extinction. Additionally, the species offer medicinal value and hold a niche place in the ecosystem, disturbing which would affect the sustainability of human life on the planet.

Below lying table mentions some of the endangered species in the world: