What are the cities with most cultural interaction? - Answers 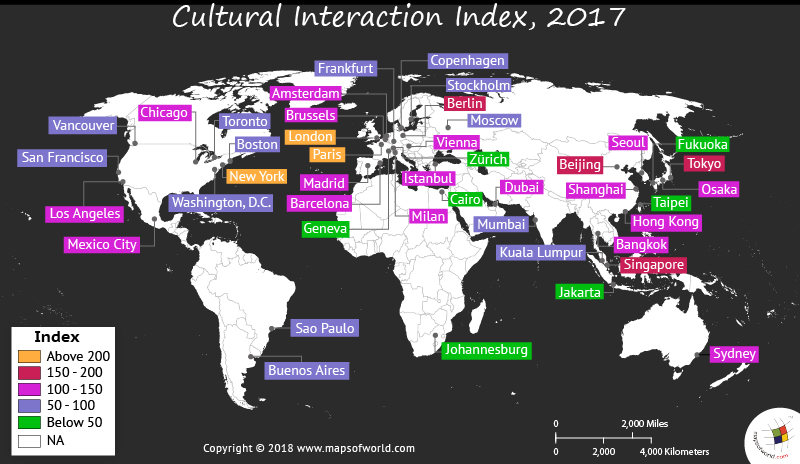 According to the GPCI (Global Power Cities Index), the factors that measure a city’s ‘magnetism’ are: livability, accessibility, economy, research and development, environment and cultural interaction.  These are done in order to reveal the strengths and weaknesses of the evaluated cities and to propose solutions to the prevailing problems.

The cultural instructiveness of a city reflects a complex process, involving different human beings within different formations. It is the mixing of ideas, people and practices from different cultures. The GPCI incorporates various indicators based on which the cities are evaluated and ranked. These indicators of cultural interaction are-

Trendsetting Potential,  including the number of international conferences held, world-class events organized and trade value of audiovisual and related services.

Cultural Resources  refer to the number of world heritage sites, environment for creative activities and opportunities for cultural, historical and traditional interaction.

The mixing of people from different cultures demands the next indicator, on which the cultural interaction of a city is judged. This is the  ‘Availability of various facilities’  to the visitors from abroad, which welcomes their stay in the city. These include number of theaters and concert halls, museums and stadiums.

Lastly but most importantly, is the indicator of  ‘International interaction’  of the city. It includes the number of foreign residents, number of visitors from abroad and number of international students.

These indicators help in understanding the cities better, and rank them on the index of cultural interaction.

The culture of a nation not only influences and crafts the view, values and overall lifestyles of the population, but also carries an intrinsic value. The benefits of culture  have spillover effects on the society as a whole. In a globalized world, the significance of cultural cross-pollination is evident. Hence, Cultural interaction is necessary because individuals have different values and preferences with regard to leadership and management, affected by their cultural background.

Tokyo  claimed number 3 spot in the rank and closes the gap on  New York, which was ranked number 2 in 2017. The stalling of the American city of New York is indicated by the number of visitors from abroad.

Cultural interaction helps boost the economy by growing tourism and building the social sector. It fosters social inclusion, civic pride and tolerance. The marketing of cultural heritage assets and promotion of talents of the local artists leads to job creation, economically benefitting the country.

Below lying table depicts the cities and their cultural interactions: