What are the Top Ten Steel Manufacturing Countries? - Answers 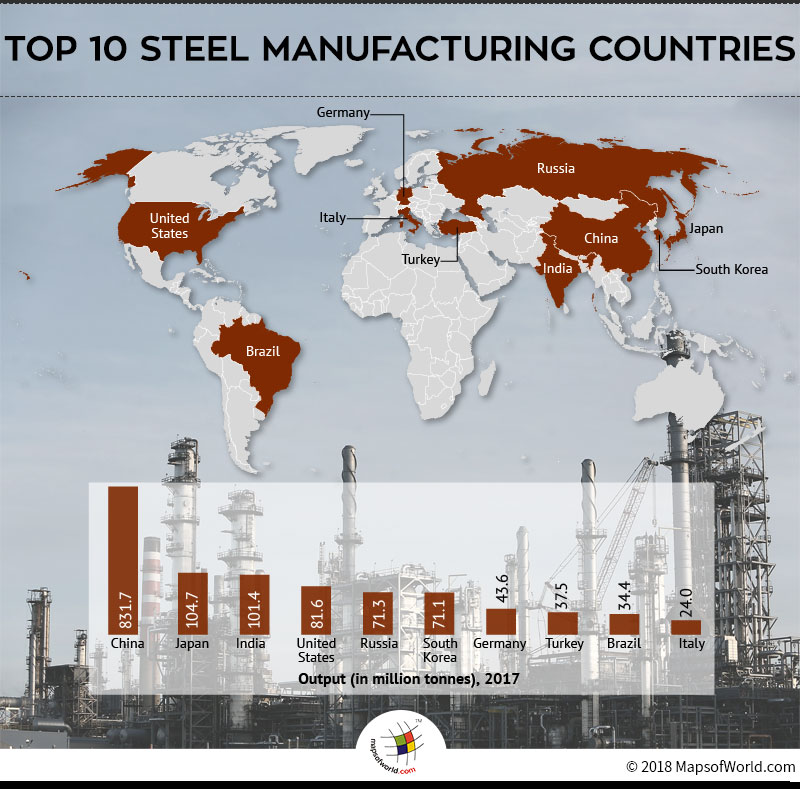 World Steel Association is one of the largest and most dynamic industry associations in the world, whose members represent around 85% of the world’s steel production. They release data each year to estimate the production and usage of steel around the world.

The steel industry saw a 4.5% rise in the total output in 2017, as compared to 2016. Considered one of the most commonly used material, the growth in steel industry had slowed before, but the demand is ever increasing, thus making the industry fall into the ‘mature markets,’ category. According to the data, Asian countries hold the top three ranks in steel manufacture.

Pioneers in steel production, the Chinese have been an unrivalled number one since the very beginning. Producing and consuming twice as much steel as the other top countries combined. Hesteel Group and Baosteel Group are China’s two of the biggest steel processing companies, which have helped China contribute 50% to the global steel production. The total amount of steel China produced in 2017 was 831.7 Mt.

Japan stands at the second position, and produced 104.7 Mt amount of steel, which is 0.1% less than the amount produced in 2016. The two companies which contributed to this growth are Nippon Steel & Sumitomo Metal. The famous Tokyo Tower is an example of the country’s excellent and advanced construction technology as well as steel production.

Quite close on the heels is India, as it produced 101.4 Mt of steel in 2017. India’s growth can be accredited to its richness in iron ore and the many government initiatives such as the ‘Make in India.’ Belgium, Nepal and Bangladesh are the biggest buyers of steel from India.

The USA had seen a fall in its steel production in 2016, however it was able to increase its production to 4% this year around, and produced 81.6 Mt of steel. Mexico and Canada being its biggest buyers, the United States stands at fourth position as it exports steel to over 150 countries.

Despite many ups and downs in its steel industry, Russia remains at fifth rank in terms of steel production, as it produced 71.3 Mt amount of steel. Turkey, Taiwan and Mexico are Russia’s biggest steel purchasing countries.

Considered as an automobile hub, Germany has long been known for its high-grade steel production and France, Poland and Netherlands are still the biggest consumers of German-made steel.

Political uprisings were a cause of trouble for Turkey in 2016, thus slowing down all industries of the nation, however, they emerged out with a 13.1% increase in steel production in 2017. The UAE, Egypt, and the US are the nation’s biggest buyers of steel.

Economic crisis, steel manufacturing plants shutting down, layoffs and much more are the major contributors towards Brazil’s less number of crude steel outputs, even though, the production has shown a 9.9% improvement since last year.

Italy stands at tenth rank this year, showing 1% rise in its steel production. Last year, it was Ukraine which was at tenth rank, but its production has declined, owing to military crisis in the nation.

The table lists top ten steel producing countries, along with the produced amount in Megatonne (Mt), a metric unit equivalent to 1 million tonnes.