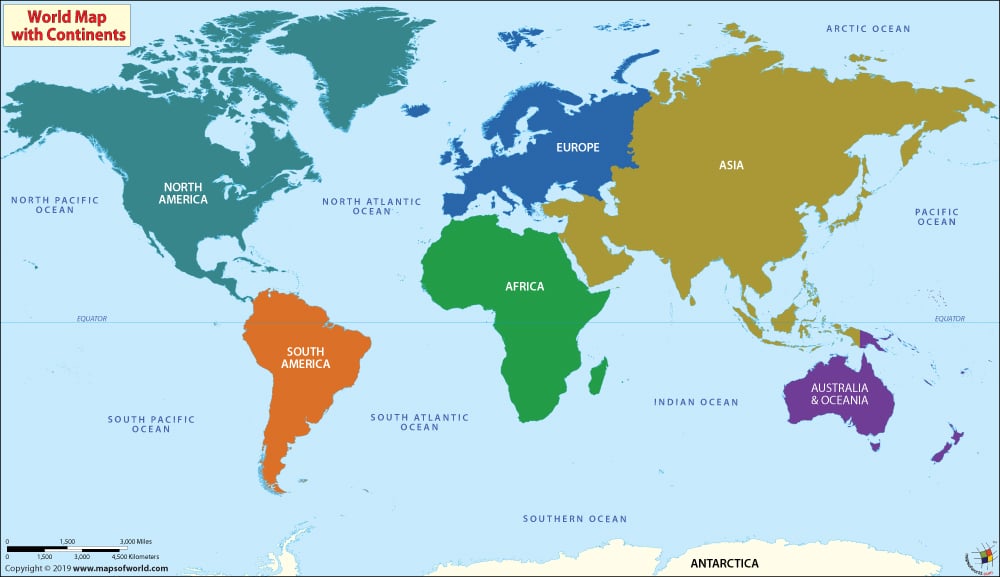 Explore the map of Continents that shows all the continents labelled on the world map.

What are the Continents

A continent can be defined as one of the very large landmasses on the surface of the earth. Comprising many countries, continents are mainly surrounded by sea. The earth is divided into seven continents; however, there is great variation in the size of all these continents. Asia is the largest continent, followed by Africa, North America, South America, Antarctica, Europe, and Australia. At times, the two continents of Europe and Asia are considered a single continent, Eurasia. The continental landmasses are concentrated more in the Northern Hemisphere than in the Southern Hemisphere in terms of area.

The Isthmus of Suez connects Africa and Asia, while the North & South America are joined by the Isthmus of Panama. These isthmuses are considered quite narrow if we take into the account the area of the landmasses they join. No isthmus or sea separates Asia from Europe, which explains the reasoning behind the concept of Eurasia, that is Europe and Asia as one continent. This is one of the six-continent models of the world. This view, however, is only popular in Japan, some Eastern European countries, and Russia. The continents North and South America are considered separate ones. However, in earlier times, they were considered a part of a single continent and were collectively referred to as America. Still today, a few South American countries consider the two to be a single continent. There’s another theory concerning the division of the continents, called the four-continent model. As per this theory, Africa, Europe, and Asia are considered a single continent and are collectively called Afro-Eurasia. And, thus, the total number of continent reduces to four, namely, Australia, Antarctica, America, and Afro-Eurasia.

The second largest and the second most populated continent in the world is Africa. It is bordered by the Indian Ocean to the southeast, the Atlantic Ocean to the west, the Mediterranean Sea to the north, and Suez Canal & Red Sea to the northeast. The continent has 53 countries, not including the disputed territory located in Western Sahara.

Spread over an area of 5,400,000 square miles, Antarctica is the fifth largest continent in the world. It is also the southernmost continent of the earth. It is surrounded by the Southern Ocean and is located in the southern hemisphere. It is the driest, windiest, as well as the coldest continent. Antarctica Information:

With an area of 3930519 sq. miles, it is the world’s second smallest continent. However, it is one of the most populous continents on the planet. Europe Information:

The world’s smallest continent is Australia. One theory suggests that the continent only includes the Australian mainland and not the islands in the vicinity, like Tasmania or New Guinea. However, another says that these islands should be included because the geological landmass shared by them is the same. Australia information:

For a better understanding of each continent, refer to the various world continent maps that have been designed by Mapsofworld.com. Click here for more information on 7 Continents and 7 Wonders and World Currencies.