Spanish (Castilian) is a Romance language, and the official language of Spain and many countries in Latin America. Spanish is the second most spoken language in the world. The world map shows the countries, bodies of water, and other geographic features in the Spanish language. 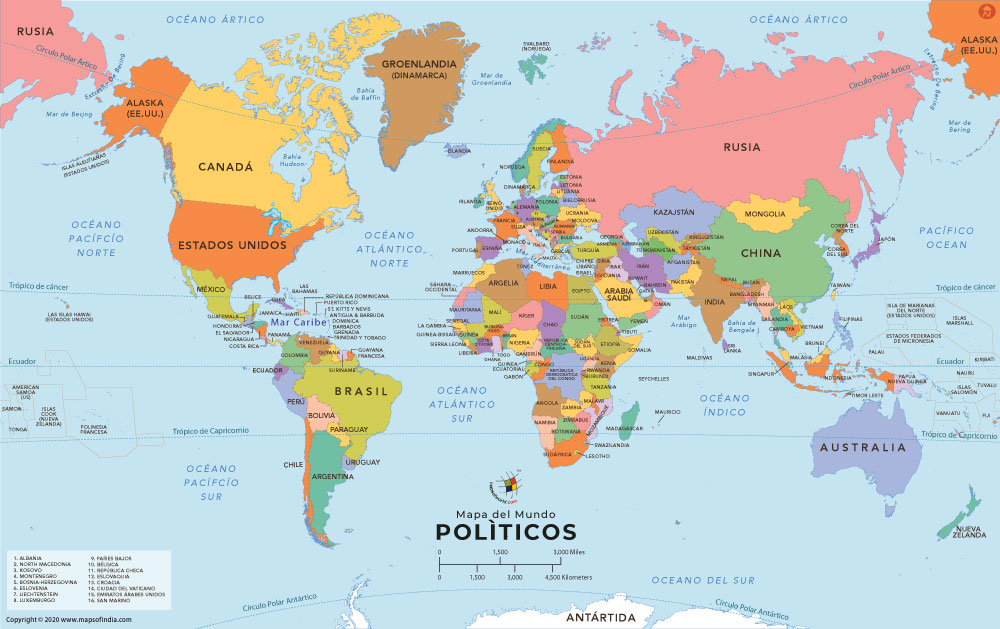 
Spanish is a Romance language, which evolved from Latin in the Iberian Peninsula, in modern Spain.
Early Spanish explorers spread the language to its colonies of the Spanish Empire beginning in the fifteenth century, primarily in the Americas, but also in Africa and Asia. Spanish is an official language in 22 countries, and is the second most widely spoken language in the world after Mandarin in terms of native speakers, with about 405 million native speakers. Spanish is also the second most widely spoken language in terms of second language speakers, learned by about 60 million second language speakers.

In addition to Spain, Spanish is spoken in Mexico, Chile, Peru, and most of the other countries in Latin America. Outside of Latin America, Equatorial Guinea in Africa also has a majority of Spanish speakers. Spanish is also spoken in parts of Morocco, the Philippines, and Guam. Brazil and the United States each have a high number of Spanish speakers, both natively and as a second language.

Spanish is one of the official languages of the United Nations, European Union, African Union, and many other international organizations. The language is officially regulated by the Association of Spanish Language Academies.

The word 'map' originated from the Latin word 'mappa' which meant a napkin or paper. Why so? Because these were the usual materials the earliest maps were drawn on.