What are the top 20 countries contributing to plastic pollution? - Answers 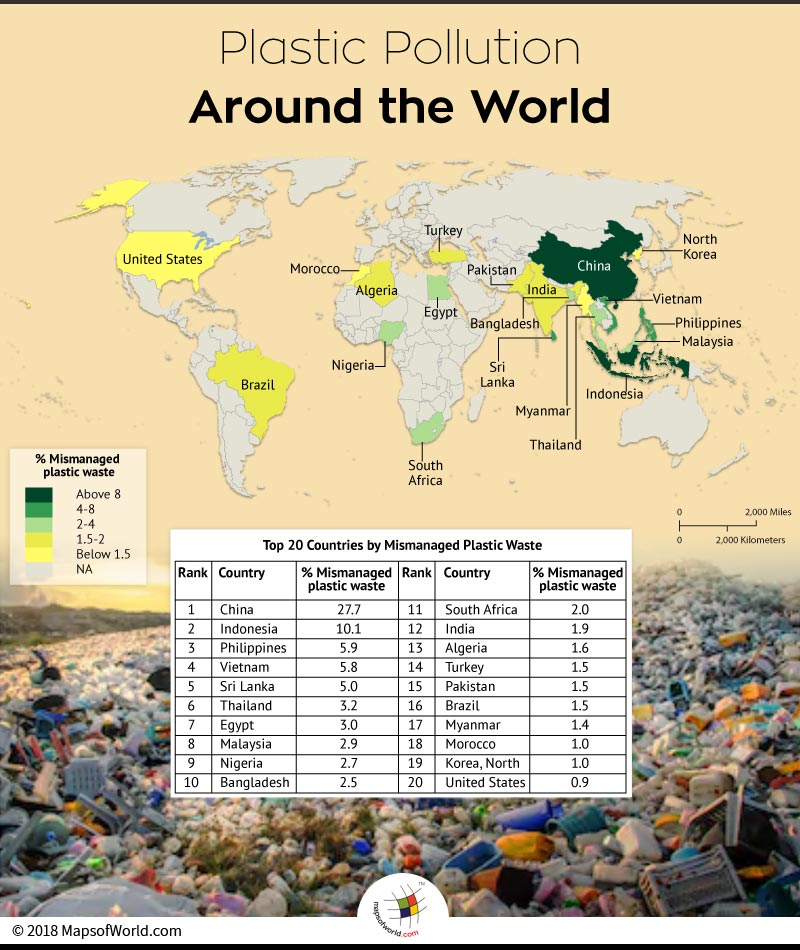 The contemporary lifestyle of the world’s population, has created the greatest and most unprecedented plastic waste tide ever faced. Originating from the land and its inhabitants, the global community has created the largest plastic pollution spectacle. The dependence on plastic and its products has become an integral part of our lives and the global consumption and production has shown an increasing trend for more than 50 years.

A simple definition of plastic suggests, a group of synthetic or natural organic materials that may be shaped when soft and then hardened. It includes resins, polymers, cellulose, derivatives, casein materials and proteins, substituting other materials like glass, wood and metals. There are three forms of plastic pollutants namely micro-plastics, mega-plastics and macro-plastics. The features like versatility, flexibility, light-weighted, moisture-resistance, strength and inexpensive, are the most attracting factors contributing to the voracious appetite. However, there are numerous additional negative factors attached to the over-consumption of plastic. This coupled with the undeniable behavioral propensity of mismanagement, discarding, littering and then polluting has led to lethal consequences.

Plastic pollution is the accumulation of plastic products and have repercussions on aquatic, marine, aerial and terrestrial beings. The mega and micro-plastics can be found in large quantities in the Northern hemisphere, concentrated around urban centers and water-fronts. As of 2018, a net of 380 million tons of plastic is produced worldwide. This plastic if not discarded judiciously, inevitably enters the environment causing great stress.

Remotely located, the ‘Midway Atoll’  is an isolated island lying between Asia and North America, is still not spared from the great plastic tide. It sees massive quantities of plastic debris. The reason behind the spread of plastic in the mid-oceanic open waters, is the presence of North Pacific Gyre. This has given birth to two large masses of over-accumulating plastic debris called the Great Pacific Garbage Patch.

It is a gyre of marine litter in the Central North Pacific Ocean, stretching across 1000 miles from California coast on the East to Japan and Hawaii on the West.

The Great Garbage Patch is the collective term for two separate accumulations, connected by a 6,000-mile marine litter corridor known as the North Pacific Convergence Zone. The corridor is not stationary due to the movement in the ocean currents and drifts. This also results in a massive pile-up on the beaches.

Ranging from large mammals like whales and sea-lions to the zooplankton, plastic has been affecting marine life on and off-shores. A total of 267 different animal species have known to suffer from entanglement and ingestion of plastic debris. The land-based sources account for 80% of the world’s marine pollution, of which 60%-95% is plastic waste. The largest examples of plastic marine debris are the discarded miles-long fishing nets called the ghosts nets that restrict the movement of large sea animals, ending up drowning, starving, lacerating and infecting them.

The slow, omnipresent and ever-increasing plastic waste is toxic and has sobering consequences. The close resemblance of the plastic waste to food, results in these wastes being consumed, by the birds. The Tropic birds circling around the large plastic pile-up off the shores end up feeding on  bits of plastic. Greenpeace reported a staggering 80% of sea birds population worldwide, that had ingested plastic, whereas 50%-80% of sea turtles found dead are known to have fed on plastic fragments. Research into the stomachs of dead birds, revealed 96% of the birds had plastic fragments. The ingestion of plastic, blocks the digestive tract and windpipes by cutting into the airflow, resulting into suffocation and death.

The extensive inclusion of chemicals in plastic production has developed potentially harmful effects on humans. These are carcinogenic in nature and promote endocrine disruption. Through bio-monitoring, chemicals like BPA and phthalates, have been discovered in the human population. A high content of these chemicals has led to disruptions in fertility, reproduction, sexual maturation and other health effects.

Blatantly visible, is the plastic spill washing on the shores and beaches but the problem of plastic pollution is not just an aesthetic one. It can also have adverse effects on the ecosystems. They impact the economy by affecting the coastal communities, shipping, coastal agriculture and fishing.