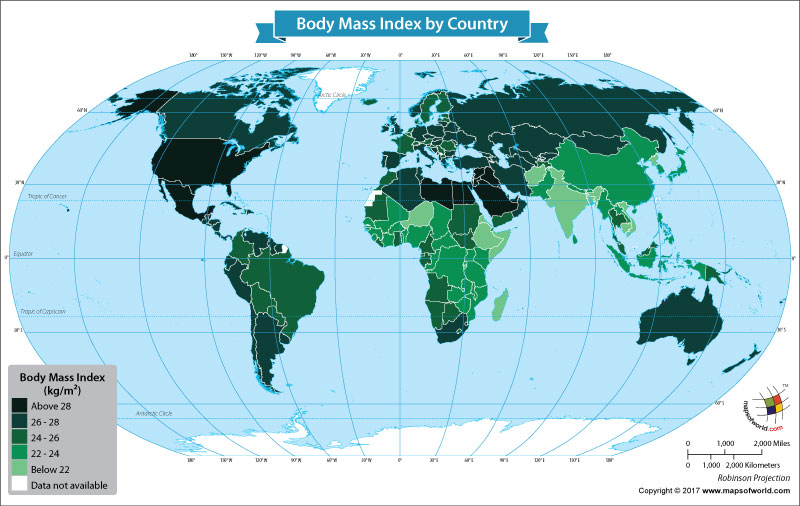 It is commonly accepted that people who have a body mass index of 25 kg/m² and above are overweight, while those with 30 kg/m² and above are considered to be obese. Meanwhile, people at the other end of the spectrum, i.e. below 18 kg/m² are considered underweight. People who have a body mass index between 18.5 to 25, are normally considered to be healthy. However, there is still some debate as to where the dividing lines should be placed.

Nauru is the most obese country in the world. According to a World Health Organization data, in 2014, the body mass index in the nation stood at 32.5 kg/m², the highest among all nations mentioned on the list. Coming at the second spot were Cook Islands and Niue which both had a Body Mass Index of 32.3 kg/m². Some other nations where the body mass index was an upward of 28 kg/m² were Egypt, Qatar, United Arab Emirates, the United States of America, Mexico, Saudi Arabia, and a few other countries.

Some countries with body mass index ranging between 22 and 24 were Japan, Sri Lanka, Nigeria, Pakistan, Singapore, Bhutan, Indonesia etc. Meanwhile countries that stood at the bottom of the scale and had a body mass index of less than 22 were India, Afghanistan, Vietnam, Bangladesh, Ethiopia, and a few other nations.

Get to know what is the body mass index in your country by referring to the table below: