At What Age Can You Have Your First Alcoholic Drink? - Answers 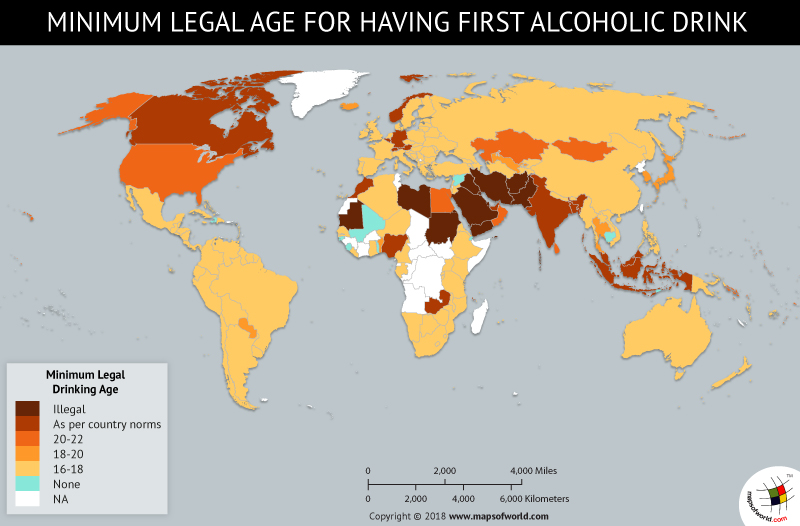 Alcohol is consumed by people around the world, for it has a strong effect on the mind. People tend to celebrate or relax after a sip of their favorite alcoholic beverage. Yet, it is always a question of wonderment that how much of its consumption is too much, as there are many people who later find themselves addicted.

“Minimum legal drinking age” is set by government of a country to restrict youngsters from falling into the habit at an innocent age, to avoid reckless incidents under the influence of alcohol and many other reasons. However, the age is not standardized across the world as each nation has its own set of rules and laws. It may range from as young as 16 in some nations to around 25 in others.

There are countries where consuming alcohol is outright illegal. If any person defies the law, he or she may even land behind the bars. On the other hand, there are countries where the laws regarding intake of alcohol vary from one region to another. Majority of these nations are Muslim-dominated and include countries like Yemen, Sudan, Saudi Arabia, Qatar, Pakistan, Libya and few others.

Back in 1984, National Minimum Drinking Age Act was passed in USA, which established the legal drinking age at 21. However, it was not always the same. Prior to 1984, in some states the age limit was 18, 19 and 20 as well. When the research noticed an increase in accidents among the young people, it was linked to their alcohol intake, and the new age limit was set.

International Alliance for Responsible Drinking (IARD) presents data regarding the changing norms and laws regarding alcohol consumption on a regular basis.  According to it, there are still many countries like Antigua and Barbuda, Cuba, Dominica, Gambia, Grenada, Saint Vincent and Luxembourg, where legal drinking age is 16.

In the most populous country China, citizens are allowed to have their first sip of alcohol as soon as they become an adult, that is, at the age of 18. In fact, in majority of the nations around the world, 18 is the legal drinking age. Algeria, Argentina, Brazil, Bulgaria, Denmark, Peru, the Philippines and many other nations come under the status quo.

In India, laws pertaining to alcohol are quite inconsistent depending on the region. The minimum legal drinking age in most of the states is 21, but in a few states like Goa, Himachal Pradesh, Karnataka and Sikkim, a person can even start drinking as early as 18. In the capital, Delhi and other states like Haryana, Meghalaya and Punjab, a person has to be 25 to enjoy their first alcoholic drink. Meanwhile, there are also certain states where alcohol is illegal, for example, Gujrat.

Find the table here to know the minimum drinking age of alcohol around the world.