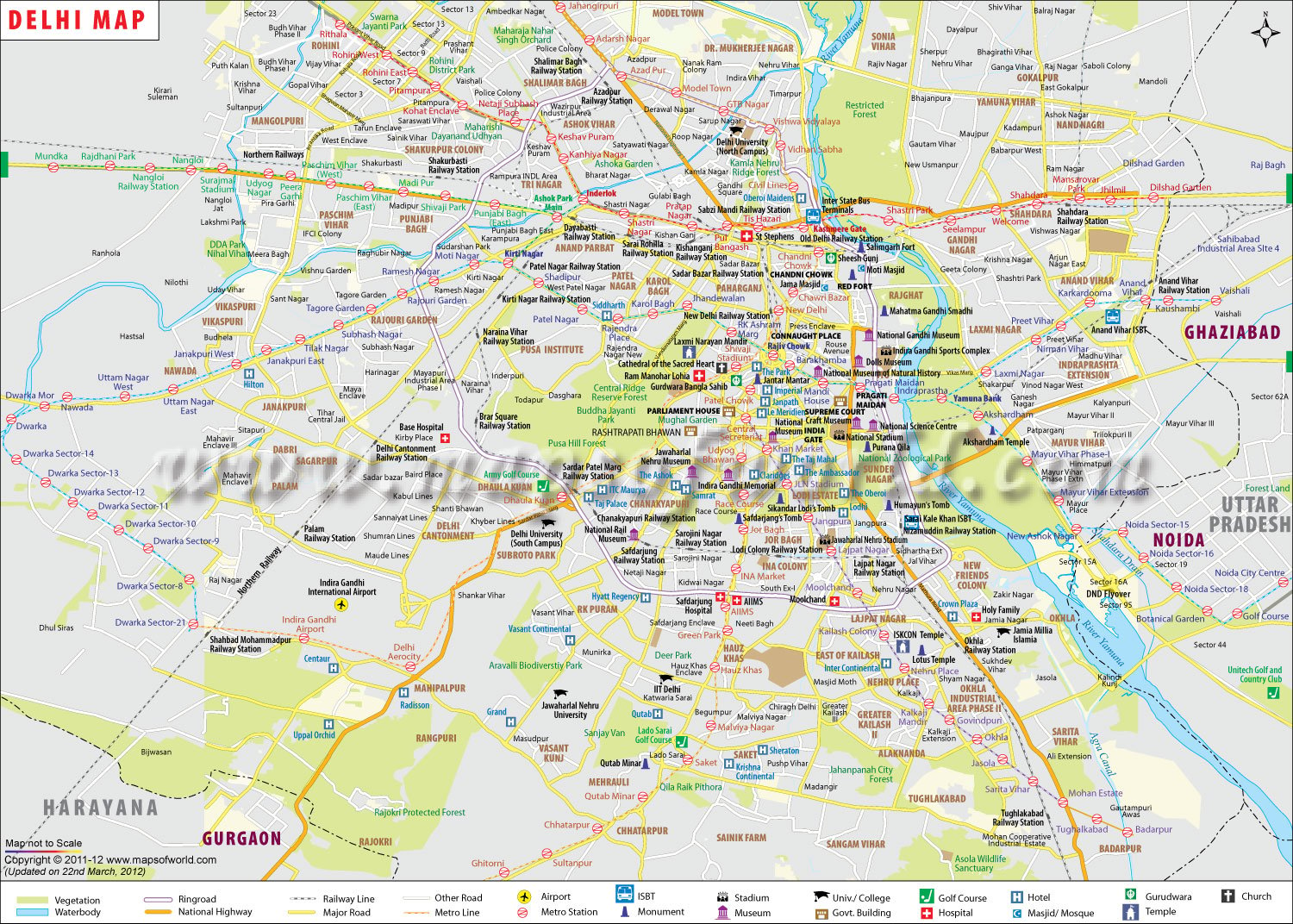 The national capital of India is New Delhi, or Delhi. It is the second biggest city in the country, and is one of the largest multicultural and cosmopolitan urban centers in the world, that boast of many attractions that appeal to visitors year-round. Delhi has a rich and deep culture, and includes many historical location for both India and the Asia.

About our Delhi Map

Prior to arriving in the city, it is recommended to consult the travel map of Delhi so that you’re able to get an overview of the metropolis.

Delhi, the Capital of India, is situated on the banks of river Yamuna, in the northern part of India. It includes nine districts, 27 tehsils, 59 census towns, 165 villages, and three legislative towns – Municipal Corporation of Delhi (MCD), New Delhi Municipal Committee (NDMC), and Delhi Cantonment Board (DCB).

Delhi, the political hub of the country, and has been inhabited from the 6th century BC. The earliest historical records show that Anang Pal, founded the Lal Kot in 736 AD, and this later became the nucleus of present day Delhi. The city gained importance during the Sultanate era. Today, it is regarded as a microcosm of India, and is the center of political, administrative, and cultural activities. It covers an area of nearly 1,000 square miles (1,483 sq. km), and has an approximate population of over 20 million.

The capital of India has been a center of the cultural and political activities for the country for several centuries, and nearly every structure in the old city has a historical background behind it. According to the eminent historians, Indraprastha, which was mentioned in the epic named Mahabharata, was actually Delhi. This location was ruled by the valiant Rajputs, before it was captured by the Afghans. Following this, the land was ruled by multiple hands such as the Tughlaks, Lodhis, and Mughals.

Finally, the Mughal emperor Shah Jahan, made Old Delhi his capital. The historic monuments, tombs, and forts which are scattered around the city are very popular tourist attractions. All these structures depict the architectural glory of ancient and Medieval India.

The city has got a unique geography which is not present in other part of India. The Delhi Ridge, and the flood plains of the Yamuna (nearly dried up) are the most prominent aspects of the geography of Delhi. Being the only river of this region, the Yamuna is of significant importance and it is mainly responsible for the presence of the fertile soil in and around the city.

The Delhi Ridge (standing at an elevation of more than1,000 feet, or 300 meters), is a prominent landmark of the area, that can be seen from almost all parts of the city. Unfortunately, the capital of India falls within an earthquake-prone zone in Asia. However, to date, no major catastrophe has been recorded during the past few centuries.

Delhi has an extreme tropical continental type of climate. Summers are extremely hot and humid, while winters can be cold. The rainy season lasts from June to October, but it can also rain in the winter. (Did we mention it can get hot in the summer?!)

How to Reach Delhi

New Delhi is connected with other parts of India by flights and its Indira Gandhi International airport. (Rated number one in the world for International Travel, 2016) There are also regular train and bus services to Delhi from the major cities in India. If you follow the driving directions which are provided in all the prominent maps of Delhi, you easily find your way to Delhi from any other place in India.

When to Visit Delhi

It is advisable to visit the city during October to March when the climate is quite comfortable and little rain is forecast. During this time, the pleasant weather allows the holidaymakers to enjoy the city to the fullest.

Attractions in the City

Since Delhi occupies a large amount of area, there are many places to visit in and around the region, and it will take a lifetime, or at least a week for a visitor to explore the city. Some of the most prominent and popular attractions are; the Red Fort in Old Delhi, Qutub Minar at Mehrauli, Jama Masjid, Lodhi Gardens, Zafar Mahal, India Gate, Raj Ghat, Humayun’s tomb and other tombs from the Mughal Era, the Akshardham Temple, and the Lotus Temple.

New Delhi, as it is now known, came into existence after India achieved Independence in 1947. Many people from different regions and different religions came and settled in Delhi – giving Delhi its cosmopolitan feel. Delhi, being the capital of India, accommodates some of the most important buildings and offices of the Indian government, these include;

It will not be an exaggeration to assert that Delhi is packed with festivals and is always in a festivity mood. There are people of all caste, creed, and religion residing in the city, and the festivals are spread throughout the year. Here are the major festivals: