What are the Top Ten Wine Producing countries? - Answers 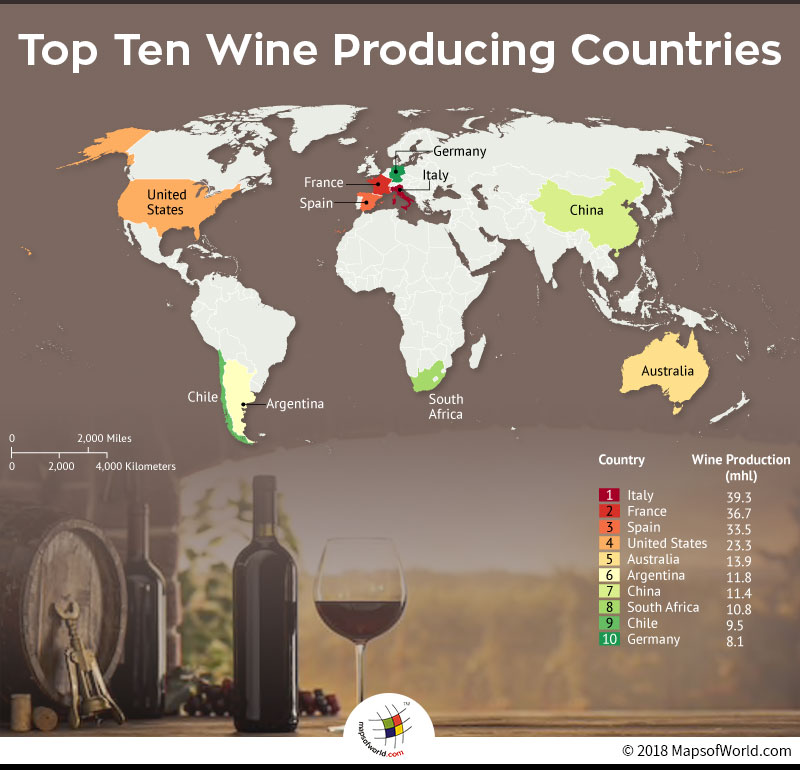 The popular and classy beverage,  wine; accompanies and enhances a wide range of cuisines and is commonly consumed worldwide. It is used as an enhancer as well as a flavoring agent, for cooking. The production of wine is called  wine-making  or  vinification, which includes processes like selecting the best variant of fruit, fermenting it into alcohol and bottling the finished liquid.

The process of fermentation is the biological process which converts the sugars such as fructose, glucose and sucrose into ethanol (alcohol) and carbon dioxide as by-products.

The oldest evidence of wine production can be traced back to  Armenia, where production and consumption was done for religious purposes. The early traces of wine made from fermented grapes, among other fruits was revealed at  China.  Residues on pottery sherds reveal the use of a mixture of rice, honey and fruit, to prepare a fermented drink similar to the present-day wine. Archaeological evidences also show sites in  Georgia, Iran, Greece  and  Sicily  that demonstrated early  production of grape wine.

Viticulture: the study, production and science of grapes, expanded over to most of the Mediterranean area and Western Europe with the expansion of Roman Empire.

The consumption of wine increased with the dawn of 15th century with the European expansion, making it the most famous drink amongst the social classes in the Southern regions of Europe, where the grapes were largely cultivated. With the modern science and technological advancements, the industrial wine production has taken over the traditional practices of vinification, expanding the consumption of the beverage throughout the world.

Italy, being the largest producer, contributes to  39.3 mhl  to the global wine production. Internationalization and the emergence of new consumption styles have turned the already huge market of Italian wine into a mass market.
The Italian wine industry is fragmented into many small producers, with production being highly heterogeneous across time and space. The origin law of 1963, institutionalized the traditional practice of wine making, which made an official recognition of the wine quality.

The French wine, being the second largest produced and consumed wine, can be traced back to Roman times. The quality ranges from the internationally sold wine to the more modest wines sold within  France.
The country produces  36.7 mhl  of global wine, making it the key product of national export for the economy. It also employs the largest number of workforces, maintaining the prestigious name in the global wine industry.

Spain, is the third largest wine producer which accounts for  33.5 mhl  of the global wine production. The third positioning of the nation is due to the low yields and wide spacing of the old vines on the infertile soils of the Spanish wine regions.
It has abundant native grape varieties with over 400 variants planted throughout Spain. The geographical factors like the vast plateau covering most of the central Spain, and the principal rivers flowing through the heart of the region fosters in the Spanish viticulture.

In addition to the traditional regions of Europe, the  ‘New World’  refers to those wine producing regions of  United States, Australia, Argentina, China, South Africa and Chile. The distinction of the ‘New World’ wines from the ‘Old World’ wines are, that the former is produced in the hotter climates than the moderately colder regions of the Central-Northern Europe. The grapes being riper result in the corresponding wines being relatively high in alcoholic content and full-bodied. The re-discovery of the ‘art-of-blending’  wines has led to the production of blends and varieties in the wine making against the original recipe of using a certain variant of grape. Trends show a certain rise in the global wine consumption as well as increases in the supply end, with the industry making a boom within the alcohol sector.