In what Countries are Orangutans found? - Answers 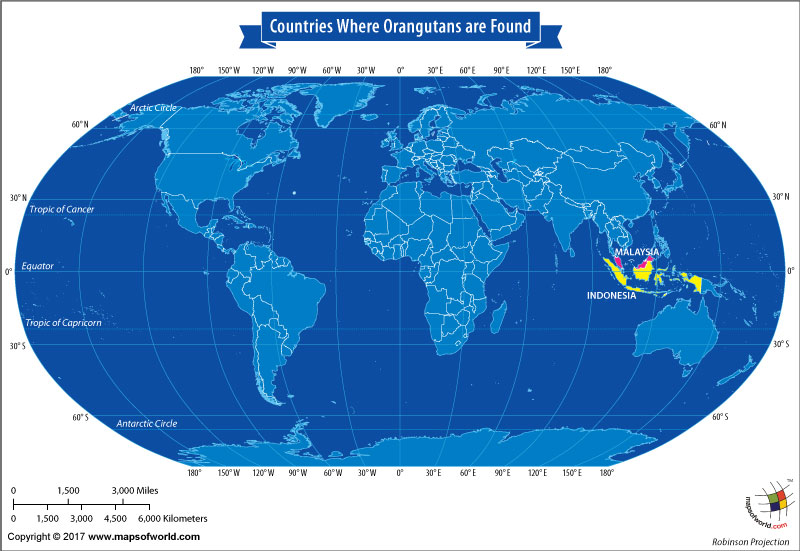 Orangutans are three extant species of apes native to Malaysia and Indonesia. The name “orangutan” comes from the Malay word meaning “person of the forest.” There are two species of orangutans: Bornean and Sumatran. These two types of orangutans are found in the rainforests on the islands for which they are named, and have slight differences in appearance and behavior. These species live primarily in a habitat of peat swamp forests.

Orangutans are extremely intelligent and prefer being solitary more than other apes, particularly the males. Orangutan mothers stay with their young ones up to 8 years of age, the longest for any great ape. Orangutans have an enormous arm span that can sometimes reach up to 7 feet, stretched from fingertip to fingertip, while their average height is just about 5 feet. This adaptation is to suit their lifestyle, which is mostly spent among the trees of the tropical rainforests.

On average, orangutans spend about 90% of their time on top of trees, sleep in nests they make atop leafy branches and use large leaves as cover in case of rain. This dependency on trees is one of the reasons why they are found in such a few places. Their diet is also dependent on trees, consisting of fruits, leaves, bark, insects and very rarely egg or meat of small vertebrates that live among the trees. Fruits make up 60% of the Orangutan’s diet, particularly mangoes, mangosteens, lychees, and figs.

In Sumatra, the population of orangutans can only be found in the provinces of Aceh and North Sumatra. In Borneo, they are found in Sarawak and Sabah in Malaysian Borneo and Central, East and West Kalimantan in Indonesian Borneo. Today, their population is being threatened by deforestation and endangerment of habitat due to palm-oil and acacia plantations. Illegal animal trade is an alarming cause of concern in which both the young and the mother ape are at risk of falling into the hands of poachers.

Both the Bornean orangutan and the Sumatran orangutan are endangered species, and according to the World Wildlife Fund, currently, there are just 41,000 Bornean and just 7,500 Sumatran orangutan left in total. It is estimated that about a hundred years ago the population of Orangutans was more than 230,000.

Below is the taxonomic data on Bornean Orangutan from the IUCN Red List of Threatened Species:
Kingdom – Animalia
Phylum – Chordata
Class – Mammalia
Order – Primates
Family – Hominidae
(Note: the data above is the same for both Bornean and Sumatran orangutans)

Visit the following to learn more about Malaysia and Indonesia: