Has the suicide rate increased around the world? - Answers 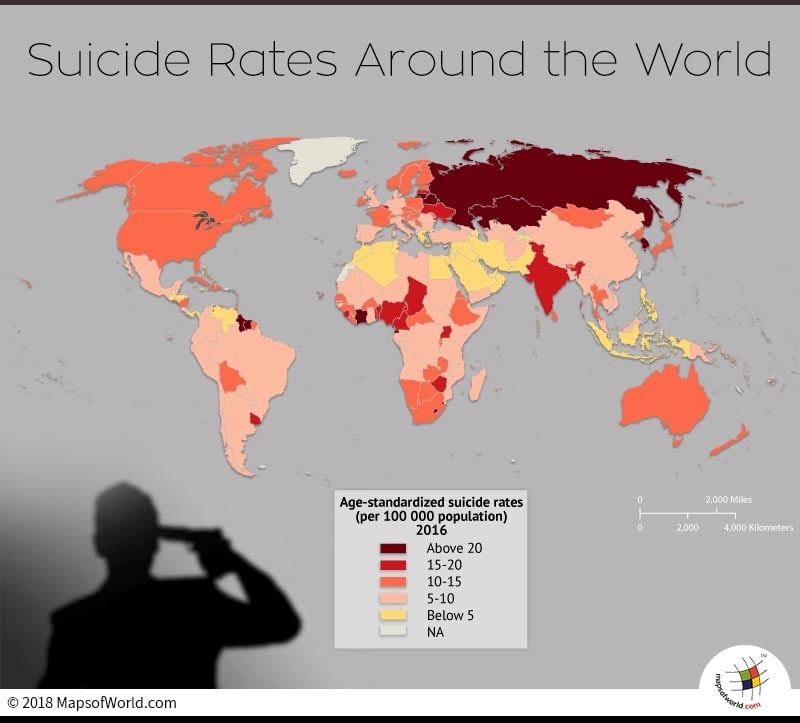 World Suicide Prevention Day is observed by many countries on the 10th of September, to spread awareness regarding suicidal behaviors, and how a person can prevent them. One would be shocked to know that globally one person commits suicide every 40 seconds, according to estimations by World Health Organization. In fact, suicide is the leading cause of death amid young people between the age of 15 to 24.

Poverty, unemployment, and loss of a loved one are some of the major triggers that provoke a person to take their own life. When someone is distressed, they need help to feel better about themselves or their life, and get a proper treatment. However, the stigma regarding mental disorders and suicide makes it even more difficult for someone to share their thoughts. In the majority of the countries, therapy is unmentionable and the subject is not openly discussed.
Physical disabilities or mental health issues like depression are the most common factors which contribute to the feelings of pain and hopelessness. Substance and alcohol abuse also play a major role in the increased number of suicides. An increased sense of isolation among individuals has been one of the prominent causes of mental illness amid Americans. Numerous studies have suggested that rise of technology resulting in lesser face-to face interactions, also leads to depression among people.  The reasons and explanations are speculative, but the harsh truth is, the suicide rate has increased!

Raising awareness in communities regarding suicidal prevention is one of the ways that mental problems could be addressed. Be kind to people around you and listen to what they have to say. There are numerous warning signs to identify if someone is feeling suicidal. One, they tend to talk or write more about death or dying, and two, you may notice dramatic mood swings and sudden changes in their personality. Even if someone mentions the idea of killing themselves, it must be taken upon seriously. You can make a difference and lend help to someone in need. Suicidal people are not insane; they are grief-stricken and want to stop hurting.

The table below mentions the suicide rate in different countries, in decreasing order: