In what countries people live the longest? - Answers 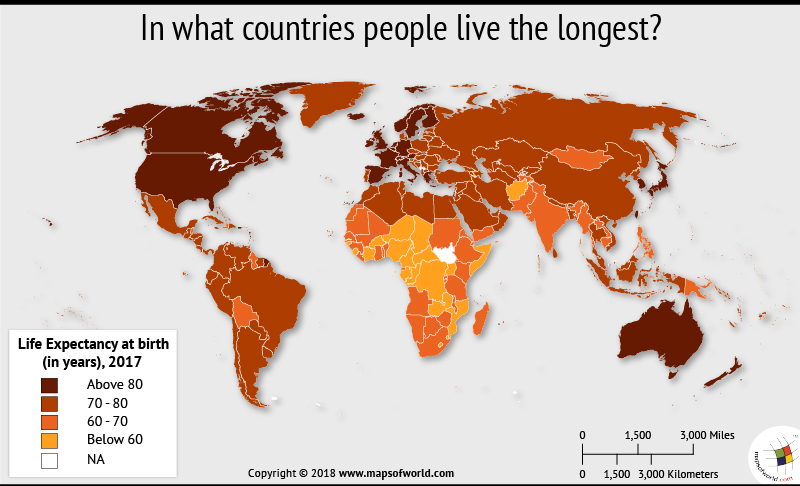 Science and medicine have not advanced far enough to bestow immortality upon us, but breakthroughs in medicine and improving healthcare standards have increased our lifespan to a great extent. Availability of efficient healthcare facilities, indulging in superior diet, favorable climate and stress-free life raises the life expectancy of individuals.

The global average of life expectancy of human beings is about 71 years. There are few countries where on an average, people surpass the age of 85, whereas in many African countries the average life expectancy rate is even below 55. If you had a chance to pick a country to spend your life, would you choose one of the following countries with most expectancy rates?

Monaco
The second smallest country in the world, Monaco has an unusually high life expectancy rate, that is 89.5. The age is almost ten years longer than what an average American gets to live. One of the richest country in the world, Monaco doesn’t even have the concept of income tax. Despite being wealthy, people living here have a good social conscience, and prefer indulging in healthier diet. Not to forget, that efficient health services, good public transport and social services are the key reasons why people here live the longest.

Japan
An island nation in the Pacific Ocean, Japan has a life expectancy rate of 85.3, and the country has had one of the highest rate since years. Numerous studies conducted over the years conclude that diet low in saturated fat, but high in carbohydrates, was the reason behind well-being of people. They tend to avoid processed foods as well.

Singapore
Quite close on the heels is Singapore, with a life expectancy rate of 85.2. The rate has increased over the years owing to the improvement in preventive and therapeutic healthcare. The country having a blend of western modernity and Asian culture, is considered to be one of the best nations globally, to spend your life.

On the other hand, the Saharan regions of Africa have the lowest life expectancy, with the rate in Republic of Chad being only 50.6. The country has an abundance of natural resources, yet they are not being used to the full potential of the people. Terrible pollution along with political, religious and ethnic unrest prevails in the nation.

The table below mentions the life expectancy rate in different countries, as per CIA Factbook 2017 estimations: