How many different time zones are there in the World? - Answers 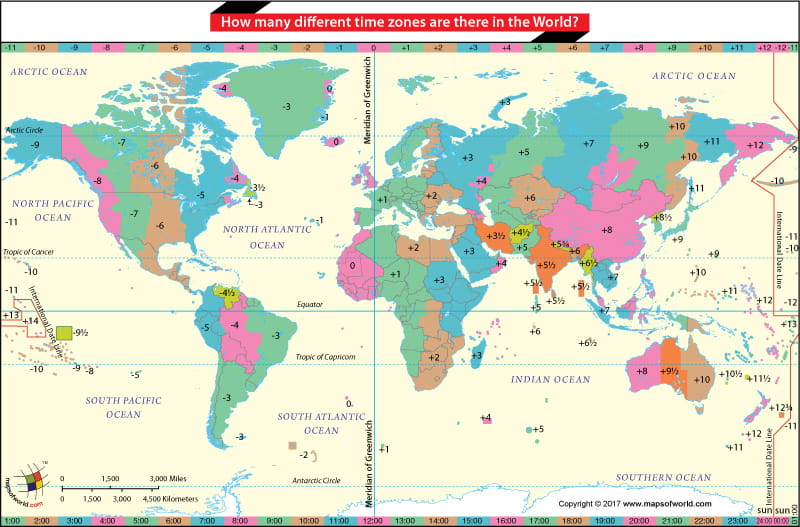 We calculate the local time of a place based on the meridian of longitude on which it is based. When the sun is overhead a particular meridian, we say it is noon, (12 PM) at all places on that meridian. For the sake of maintaining uniformity, a system of standardized time calculation has been adopted. This creates the idea of ‘time zones.’ A time zone is a division of approximately 15 degrees, across which the same time is followed.

In 1884, delegates from 24 different nations met in Washington DC (International Meridian Conference) and agreed that the ‘0’ degree meridian, ‘Prime Meridian,’ would pass through Greenwich, England. At the conference, the delegates also agreed upon the establishment of 24 different time zones and agreed upon the use of a Coordinated Universal Time (UTC) as the basis of timekeeping across the world.

Based on this, each time zone should ideally cover 15 degrees of longitude and have a difference of one hour from its preceding time zone. This is very practical, but not achieved. For the sake of uniformity, some countries have extended their time zones. The time in each time zone is kept with reference to the UTC (for example – The time in Washington DC is four hours behind the UTC).

Some countries are vast and straddle multiple time zones. The USA is spread across 11time zones (covering the contiguous US, Alaska, Hawaii, and five US dependencies). Only nine of these are actually used because two of the US dependencies are uninhabited.

The People’s Republic of China spans across 5 different geographical time zones. But the entire country follows a single standard time which is UTC+08:00 (eight hours ahead of Coordinated Universal Time). This is internationally referred to as China Standard Time (CST) and domestically called Beijing Time. India also is an example of a large nation following a single time zone. India time is UTC +5:30, making it unique that it is set to the half-hour.