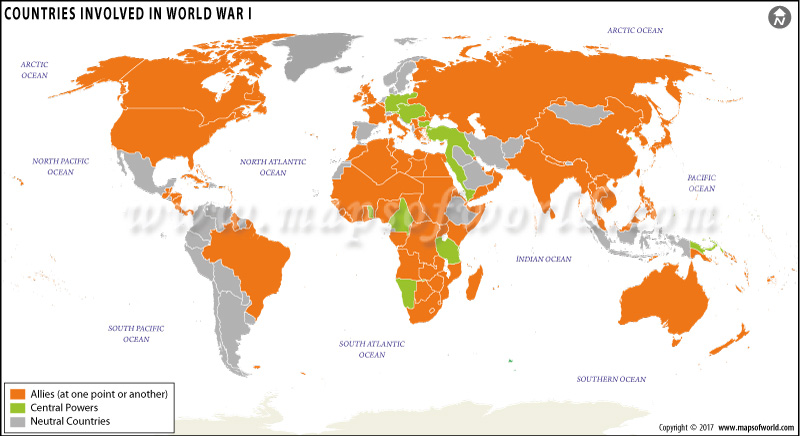 World War I – The Great War

Although World War I involved primarily the countries of Europe and was fought largely in Europe, it also spread to other parts of the world, especially to areas in and around the colonial possessions of the warring European powers.The main opposing forces were the Central Powers, which included Germany, Austria-Hungary and Turkey against the Allies composed of largely Great Britain, France, Italy, Russia, Japan, and subsequently, the United States. The death and destruction in the wake of this disastrous world event was unprecedented in world history and assumed catastrophic proportions as the war swept across Europe and other parts of the world especially parts of Africa and Asia.

The World War I Map represents the geopolitical map of the world on the eve of the war and shows the location of the various theaters of war, where some of the most important and decisive battles were fought.

First Battle of the Marne:

Fought during September 6-12, 1914, the First Battle of the Marne was a counter offensive undertaken by the French army and the British Expeditionary Force to halt the German advance towards the French capital Paris. Earlier, the Germans had already overrun Belgium and most of northeastern France to reach just 30 miles outside of Paris thereby forcing the Allies to retreat towards the Marne River. The counterattack resulted in a decisive victory for the French and the English who stopped the German advance towards Paris that would have resulted in a total German victory on the Western Front of the War.

While the German advance on the Western Front was stopped at Marne, on the Eastern Front they were engaged by a 3,50,000 person strong Russian army at Tannenberg in present-day northeastern Poland. But at Tannenberg, the Germans handed out the Russians a crushing defeat leading to heavy Russian casualties. Imperial Russia lost almost an entire army and the victory was one of the greatest for Germany in World War I. But on the other hand, the Germans, in order to halt this Russian attack on East Prussia, had to divert troops from their advance towards Paris, which was crucial for their French campaign, and which ultimately was repulsed by the Allies at Marne.

Also called the Battle of Flanders, the First Battle of Ypres was fought during October and November 1914, and was the last major battle of the first stage of World War I on the Western Front. After the repulse of the German advance towards Paris with the Allied victory at Marne, both sides tried to swing around the other’s defenses and thereby outflank one another. The result was what has been termed as the ‘Race to the Sea’ that ended with the First battle of Ypres in Belgium and the subsequent Battle of the Yser. Although the German attack was once again repulsed at Ypres, both the armies became too exhausted to carry out any major offensive against each other. As a result both sides settled down to prolonged trench warfare. The line of trenches dug by both sides extended from the Swiss frontier to the English Channel on the Atlantic Coast of Europe. The stalemate that ensued with the trench warfare was to last for the next three years and largely characterized the military engagements on the Western Front during that period.

The Battle for Gallipoli:

Responding to Russian pleas to relieve them of some of the Turkish pressure in the Caucasus region, the Allies decided to carry out a naval expedition to capture the strategically located Gallipoli Peninsula in Turkey with an eye on capturing Constantinople (now Istanbul). Finally on April 24, 1915, an amphibious force comprising of soldiers from Britain, France, Australia, and New Zealand began to land on the shores of the Gallipoli Peninsula. Though initially outnumbered, the Turkish troops stationed on the cliffs overlooking the shores of Gallipoli had enough time to slowly receive reinforcements and defend their positions. This was possible because after the initial few successes of gaining footholds in the Peninsula, the Allied progress slowed down. Although the British brought in further reinforcements nothing substantial could be achieved, and the Gallipoli campaign to secure the Dardanelle Strait had to be aborted at the cost of 214, 000 injuries including a little over 46,000 deaths.

From 1914 until early 1916, the Allies’ efforts were geared towards breaking the deadlock that had set in as a result of the prolonged trench warfare. All along during this period, the Allies, especially the British, tried to consolidate their strength in terms of both men and material in order to be able to launch a major offensive to end the trench stalemate. The Germans were also frustrated by this long stalemate and were looking at the ripe opportunity to strike and break through the French defenses. Ultimately the Germans chose to attack the town of Verdun, which was fortified by a ring of underground trenches. The massive German offensive on Verdun that lasted from February to July 1916 proved to be one of the longest and most devastating battles of the War, and resulted in heavy casualties on both sides. The end result was a status quo for both sides with the Germans unable to break through the French defenses and the French recapturing most of their strongholds lost during the German offensive on Verdun. The offensive ended when the German attention was diverted to the Allied attack on the Somme River.

Battle of the Somme:

Fought from July 1 to November 18, 1916, the battle of the Somme was an Allied offensive aimed at diverting German attention from the assault on Verdun and relieving pressure on the French forces there. But the offensive proved largely unsuccessful, although it managed to divert the Germans from Verdun and therefore secure the French defenses on the Western Front. In the process Britain and France lost nearly three quarters of a million men and on the first day of the campaign itself, Britain lost nearly 20,000 men, the largest number of deaths in a single day in British military history. The Battle of the Somme would go down in history as one of the bloodiest battles of the war, in which thousands of human lives were unnecessarily slaughtered in a futile exercise.

Despite their victory, World War I caused untold damages to the life and property of Allied Nations. The Central Powers faced their share of casualties and losses at the end of the war. The war was a shock to the world in general, and Europe in particular. The European nations had been lulled into a sense of security by the absence of any major war in the century preceding World War I. At the end of the Great War, the countries involved could only estimate their damages.

The financial implications of the war were calamitous. Although World War I cannot be said to have directly caused the Great Depression, the financial strains of the Great War certainly acted as catalysts. The following table shows the costs incurred by the warring nations in U.S. dollars from 1914 to 1918.