What are the top 10 iron ore producing nations? - Answers 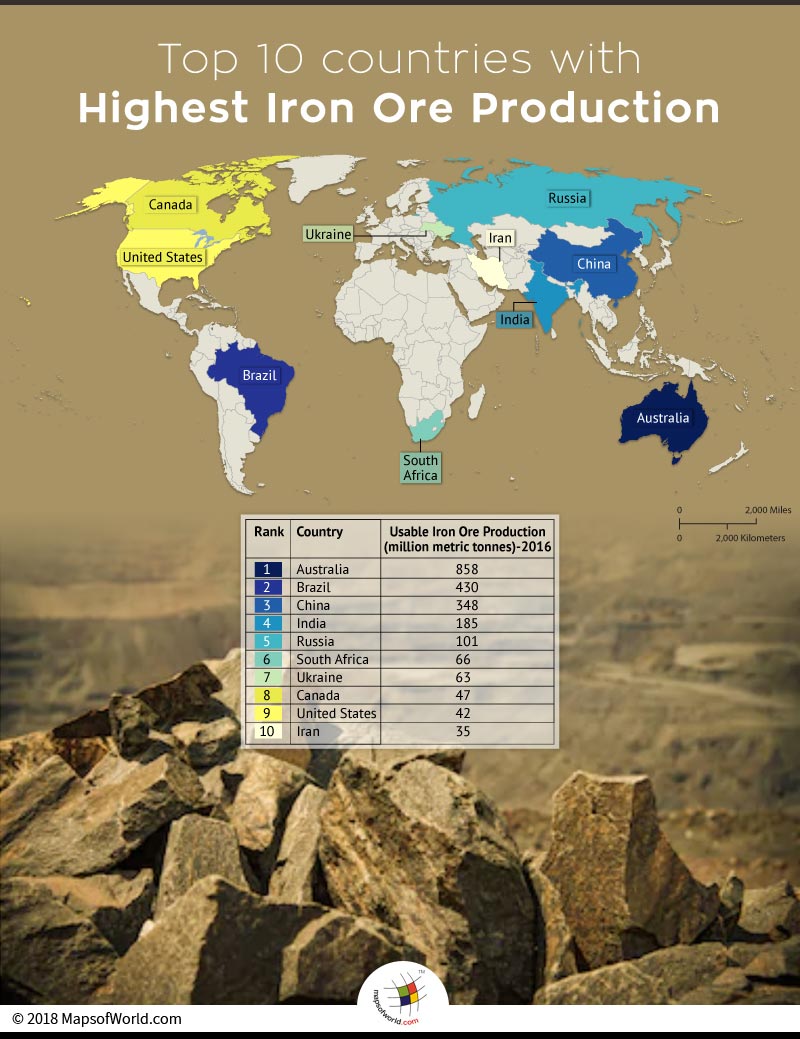 The Earth consists of various elements, of which 32.1% consists of iron. Most of the iron reserves are in the earth’s interior, but the iron ores prevalent on the surface, that are easily extractable have the most economic value. The prominence of iron can be traced back to when the planets were stars and bred iron, on the completion of the reaction chain for generating energy by nuclear fusion. Iron, is thus the ash produced eventually by fusing hydrogen with helium, lithium and so on. Rarely occurring as the native metal, the element of iron is ranked fourth in abundance in the earth’s crust. It accounts for almost 95% of all metals used by modern industrial society. Hence, the relevance of the element and its source is apparent.

Iron ores are rocks or minerals from which metallic iron is extracted for economic purposes. These iron oxide rich ores vary in color and texture ranging from dark grey, bright yellow, deep purple to rusty red, depending on their composition. The iron ore is the raw material used to make pig iron, which is further used to make steel. Ninety-eight percent of the mined iron ore is used for the production of steel. The iron itself is found in the form of  Magnetite, Hematite, Goethite, Limonite and Siderite. It is the first two forms that contain the highest iron content and are called ‘natural ore’ or ‘direct-shipping ore.’ This implies that they can be directly fed into the iron making blast furnaces. The low-grade ores, on the other hand needs to be smelted, in order to remove the oxygen. This form of extractive metallurgy, uses carbon as the reducing agent while expelling oxygen, to leave behind the elemental metal.

Virtually unknown on the surface of the earth, the metallic iron is available as iron-nickel alloys from meteorites and very rare form of deep mantle xenoliths rock fragments. The vast majority is bound in silicate or carbonate minerals. Prior to industrial revolution, most iron ore were obtained from bog ore or goethite, whereas the prehistoric societies used laterite as a source of iron ore.

Magnetite ore being highly economic owes it to the crystallinity of the ore, the grade of iron with the BIF host rock and the level of contaminants in the concentrate. Magnetite gets its name because it has rare property of being magnetic. Currently, the magnetite iron ore is mined in the  US, Eastern Canada and Northern Sweden.  Also, magnetite bearing BIF are mined extensively in Brazil and Australia. It is one of the richest iron ore.

Hematite iron ores are prevalent across all continents, except Antarctica, with large concentrations in  South America, Australia and Asia. Being the most common iron ore, it is the main ore for present iron smelting.

Limonite. Easy to find iron mineral in nature, is some mixture of iron oxides and hydroxides, including goethite. Also called ‘natural rust’, it comes in many variants and is formed primarily from the weathering of more primary iron ores like hematite and magnetite and also from the oxidation and hydration of iron-rich sulphide minerals.

A not well-defined substance, bog iron is often only available in regions without mountains. This includes large parts of  Netherlands and Hungary. The formation of this type of iron ore happened firs by dissolving of oxygen-free water deep in the earth’s interior with the ore or by precipitating the dissolved iron as some kind of oxide, wherever oxygen was available.

Siderite is a well-defined iron ore which is relatively easy to smelt, but not as rich as other iron ores. One large reserve of this type of iron is found in Austria, which is extensively mined.

China: With rapid economic growth, the demand for iron ore is becoming evidently strong. BIF type is the most prominent type of ore found in China, along the Northern platform. It recorded a production or 340 million tons in 2017, with comparatively low iron content.

Below lying table depicts the top 10 countries with the highest iron ore production in 2017: