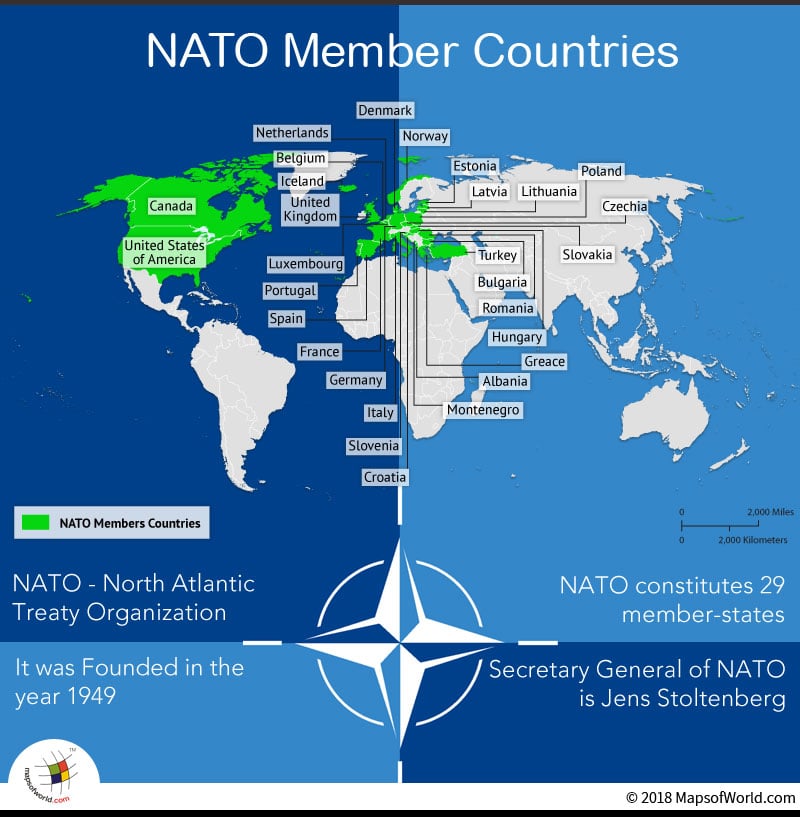 The  North Atlantic Treaty Alliance,  is an international intergovernmental military alliance between 29 North American  and European  countries. The military alliance concerns the national security of the contracting countries with a mutual agreement to  protect and render support in times of unforeseen crisis or threat to the sovereignty. NATO places security as the central part of the alliance. The sole purpose is to safeguard the freedom and security of its members through political and military means. Politically,  it promotes democratic values and provides a common platform to the members states to consult and cooperate on defense-related issues to solve problems, trust building and to prevent conflict. In terms of  military cooperation, it believes in the principles of peaceful resolution of disputes. In case of a diplomatic failure, the use of military power is then seen appropriate to undertake crisis management operations. These are done under the defense clause of the treaty alone or in cooperation with other countries and international organizations.

In the backdrop of the Soviet armies gaining power during the Cold War, the need to create an alliance, was felt. Hence, to counterweight the Soviet armies, stationed in the Central and Eastern Europe, the military alliance of NATO, was conceptualized. Also called the  Washington Treaty, the original members in  1949  were  Belgium, Canada, Denmark, France, Iceland, Italy, Luxembourg, the Netherlands, Norway, Portugal, the United States and the United Kingdom.  Article 10  of the treaty, lays provisions for the enlargement of the alliance, making scope for newer members. Therefore, the expansion to a cooperation of 29 members with additional signatories was done on certain occasions:  Greece and Turkey (1952), West Germany (1955) as Germany (1990), Spain (1982), the Czech Republic, Hungary, Poland (1999), Bulgaria, Estonia, Latvia, Lithuania, Romania, Slovakia and Slovenia (2004), Albania and Croatia (2009), and the latest member Montenegro (2017).

Only  14 articles  long, the treaty signed at the  Departmental Auditorium in Washington D.C., borrowing its name from the city. It commits each member to share the risk, responsibilities and the benefits of ‘Collective Defense,’ forming the heart of the treaty. Deriving its authority from  Article 51 of the United Nations Charter, it reaffirms the inherent right of the member nations, Individual or Collective Defense. The most significant part of the treaty, is expressed in  Article 5,  which holds the commitment of all the member nations to protect each other and set a spirit of solidarity within the alliance. The Article 5, was invoked by NATO, in 2001, for the first time, post the terrorist attacks organized by Osama Bin Laden, destroying the World Trade Center, in New York City and part of Pentagon outside Washington D.C. Despite the changing global trends, the treaty has never been modified, but offers each ally the possibility to implement the text in accordance with their contemporary needs and capacities.

Integrated into either military executive roles or civil administration, all agencies and organizations within NATO, perform roles that directly or indirectly support the security aspect of the alliance. With the  North Atlantic Council, at the core of the structure, forms the principal political decision-making body. It brings together the representatives of the member states for policymaking and operational decisions, that need collective scrutiny and conclusions. It acts as the consulting body for all the members, to discuss issues affecting their respective peace and security. Hence, the end policies are expressed as a collective will of all member countries of the alliance and reflect spirit of unanimity and common accord. Established by the  Article 9  of the treaty, it is the only body with the authority to create subsidiary bodies and is chaired by the Secretary General. The incumbent  Secretary General  of the NAC is  Jens Stoltenberg, the former Prime Minister of Norway. Featured as the alliance’s top international civil servant, he is responsible for steering the processes and their implementation. He is also  NATO’s chief spokesperson  and heads the  Organization’s International Staff.

The  Nuclear Planning Group, within the alliance has the same level of authority as the North Atlantic Council, in matters pertaining to nuclear forces. The nuclear policies are under consistent review and are modified and adapted in accordance with the new developments. The NPG, also discusses wider issues such as nuclear arms control and nuclear proliferation. Formerly known as the  Nuclear Defense Affairs Committee, it aims to provides a consultative process on nuclear doctrine within the alliance. At the third tier, the Alliance has a network of subordinate committees to deal with all subjects on its agenda, it hosts national representatives and experts from member countries, regularly.

The implementation of political decisions having military implications, are authorized by the  Military Committee  within the alliance. One of the oldest permanent body within NATO, it’s the primary source of military advice to NAC and the NPG, additionally directing the two  Strategic Commanders- Supreme Allied Commander Europe and Supreme Allied Commander Transformation.  Acting as an essential link, it is responsible for the translation of political decisions and military guidance. Headed by its chairman, it meets frequently at the level of permanent Military Representatives and three times a year at the level of Chiefs of Defense.

Although, NATO existed throughout the Cold War countering the Warsaw Pact, and conducted various military exercises, not even a single military operation was carried out. The operations started post the Cold War when NATO rose to a prominence in Bosnia, to end the trouble.  The Bosnia War (1992-2004), prompted with the disintegration of Yugoslavia and was brought to a state of peace with NATO efforts and air strikes. This was followed by other operations namely:  the Kosovo Intervention (1999-present), War in Afghanistan (2001-present), Iraq training mission, Gulf of Aden anti-piracy and the Libyan intervention. Having a very few permanent forces of its own, the NAC  while launching an operation, receives support and military contributions from military forces of the member states, on a voluntary basis. The forces then return to their countries, on the success of the operation.

In the contemporary NATO leadership meeting in  2018,  the focus has shifted back to reinforcing the alliance’s military presence in Eastern Europe as part of the deterrence policy. NATO Secretary General, brought forth five major issues that require efforts by the member nations, in his speech before the NATO Parliamentary Assembly. The key concerns of  defense and deterrence, projecting stability, fostering NATO-EU cooperation, NATO modernization and adaptation and increasing defense spending, were thrown light upon.

The following table mentions the member states of NATO and their respective years of joining: