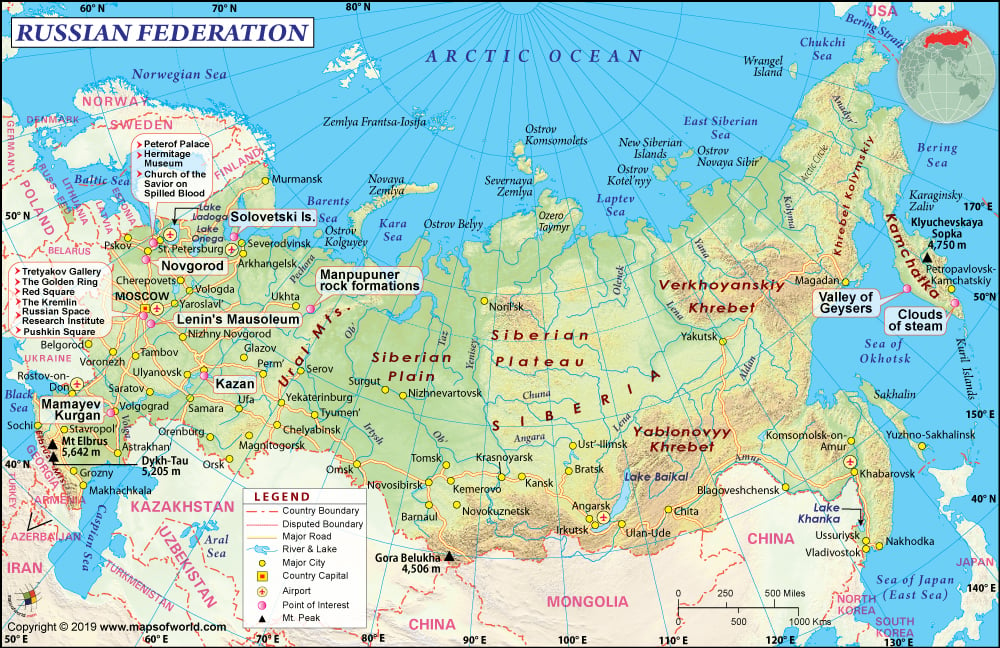 Russia, formally Russian Federation, is a transcontinental country spanning eastern Europe and Northern Asia. Russia is the largest country in the world, having a total area of over 17,125,191 square kilometers (6,612,073 sq mi ). Russia covers approximately ⅛ of the earth’s inhabited land. Russia has International borders with 16 sovereign states. The country shares a land boundary with 14 neighboring countries and two maritime boundaries with the United States and Japan. Russia has 83 federal subjects, which have equal representation but vary in level of autonomy. The administrative divisions in Russia are oblasts (provinces), republics, Krais (territories), autonomous oblasts, and federal cities. The official language of Russia is Russian. The country has a broad natural resource base and about 40 UNESCO-listed biosphere reserves.

One can explore mapsofworld for more details about the national flag of Russia. The flag is a tricolor flag consisting of three equal horizontal fields, white on the top, blue in the middle, and red on the bottom. The Russian flag was used in 1696 by Russian merchant ships. The official interpretation of the Russian flag at the time of Alexander lll of Russia was:

Russia Location Map shows the exact location of Russia on the world map. The country is located in the northern part of Eurasia. Russia shares maritime borders with Japan (by the Sea of Okhotsk) and the United States by the Bering Strait. As shown on the map, Russia is located. The country shares its boundary with Norway, Finland, Estonia, Latvia, Lithuania, Poland, Belarus, Ukraine, Luhansk, Donetsk, Georgia, Abkhazia, South Ossetia, Azerbaijan, Kazakhstan, China, Mongolia, North Korea, Japan, and United States.

The capital of Russia is Moscow. It is located in the far western part of the country. Moscow is the most populous city in Russia, and it’s not just the political center but also the country’s industrial, cultural, scientific, and educational capital. Moscow has been the spiritual center of the Russian Orthodox Church for more than  600 years. Moscow lies on the Moscow River, a tributary of the Oka and thus of the Volga, in the center of the Vast Plain of European Russia.

The Physical Map of Russia has all the valuable details about the topographic features of Russia. Russia spans the northernmost edge of Eurasia and has the world’s fourth-longest coastline at 37,653 km (23,396 mi). The country is large than the three continents of the world. The country is home to Europe’s longest river (the Volga), deepest lake (the Baikal), and the largest lake (Ladoga), three lowlands. Geographically the landmass of Russia is divided into five zones Tundra Zone, Taiga Zone or forest, Steppe Zone or Plain, Arid Zon, and Mountain Zone. Most of the country consists of

Russia experiences a wide range of climates due to its vast size. The humid continental climate is predominant in most parts of the country, sparing the Siberian region. Continental Climate dominates the territory of Russia falling in Europe with warm to hot summers and severely cold summers. Rainfall takes place throughout the year. The Siberian region experiences a subarctic and tundra climate in the polar north. The winters are drier than Summers in Eastern Siberia and the Far East. Most Russia witnesses snowfall during winters, whereas some areas adjoining the  Black Sea witness winter rains. Northeast Siberia has recorded the lowest temperatures of -69 degrees Celsius (or 92.2 F). This Russia Climate Map has all the info you need.

The traditional history of Russia dates back to the year 862 AD. It was the beginning of the Unification of the region into a single country with the election of Rurik, a Scandinavian Norseman, as the leader of Novgorod. In 882 AD Kievan Rus was founded under the rule of the Rurik dynasty. Kievan Rus was the first East Slavic State. Kievan Rus flourished for around 400 years and then, in 1240, disintegrated due to the Mongol invasions. Established in 1283, the end of the 13th century witnessed the rise of the Grand Duchy of Moscow. In 1547, Ivan IV established the Tsardom of Russia, a centralized Russian State. In 1721, Peter the Great proclaimed the Russian Empire. The

The Russian Empire was among the largest in the world. The Russian Empire had many capable monarchs that ruled the empire for nearly 200 years. By the beginning of the 20 century, the Russian Empire began to witness the social and economic problems which led to the February Revolution of 1917 and, ultimately, its collapse. In 1918, the Russian Soviet Federative Socialist Republic was formed and continued as an independent state for five years. In 1922 a confederation of Russia, Ukraine, Belorussian, and the Transcaucasian Federation led to the formation of the communist state of the Soviet  Union. The Soviet Union lasted till 1991 and its dissolution into 15 independent Republics. In 1991 the Russian Federation became an independent nation.

Oblast (Provinces) are the standard division of Russia, with a governor and local legislature, but failing under the governance of the federal government. There are 46 provinces (Oblast) in Russia. Below are the maps of the following 46 oblasts:

The Russia Cities Map depicts valuable details about the major cities in Russia. The six major cities of Russia are:

Russia is the world’s largest country and offers various travel experiences. The country has everything from historical sites and cultural activities to treks on the glacier-capped mountains to roaming along the shoreline of the earth’s oldest lake. One can refer to Russia’s rail and road maps for further details. Some of the popular places to visit in Russia are:

FAQ #1: What continent is Russia in?

Faq #2: What Is The Capital Of Russia?

Ans: Moscow is the largest city and national capital of Russia.

FAQ #3:What is the type of government in Russia?

Ans: Constitutionally, the country is characterized as a federation and semi-presidential republic. This president is head of state, and the prime minister is head of government.

Faq #4: How big is Russia compared to the US?

Faq #5: How many time zones are in Russia?

Ans: There are 11 time zones in Russia

FAQ #6:When was Russia founded?

FAQ #7:Where is Russia located?

Ans: Russia is located partly in Northern Asia, bordering the Arctic Ocean, and partly in Eastern Europe and the North Pacific Ocean.

Faq #8: How far is Russia from Alaska?

Ans:  The narrowest distance between Mainland Russia and Mainland Alaska is approximately 55 miles. Bering Strait is the body of water between Alaska and Russia.

FAQ #9:Is Crimea part of Russia?

Ans: The Republic of Crimea is Russia’s de facto federal subject (republic). The status of Crimea is disputed. In 2014 Russia invaded and subsequently annexed the Crimean Peninsula from Ukraine, although most countries recognize Crimea as part of Ukraine.