What countries contribute to the highest number of cruise ship passengers? - Answers 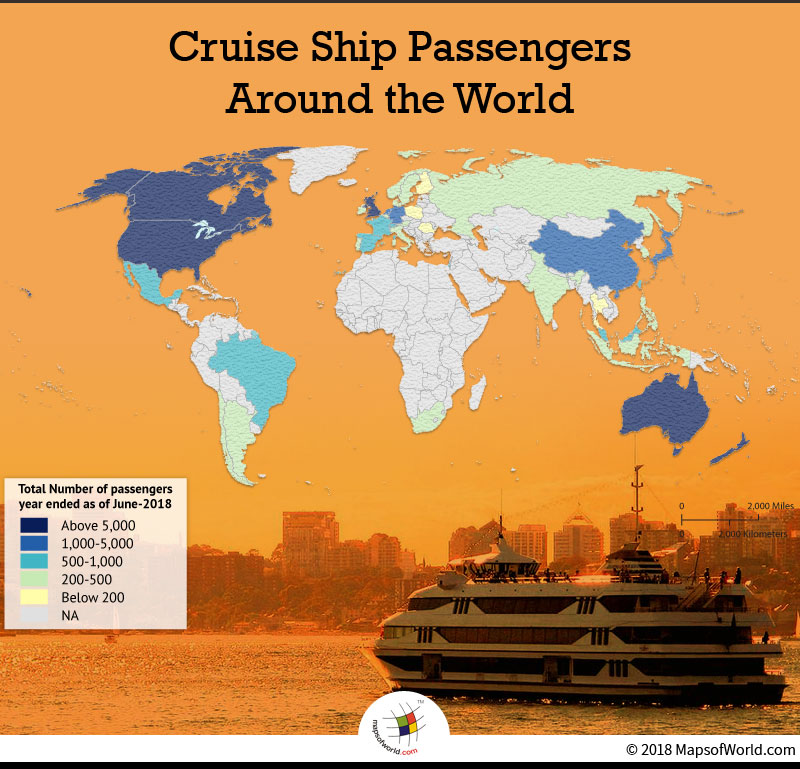 The activity of cruising is largely associated with  pleasure voyages, as part of the experience, to various destinations on the way. A  cruise ship is a luxury vessel carrying passengers, with non-transportation as the primary purpose. It differs from  ocean liners  in terms of its destination and purpose of journey. An ocean liner, typically transports passengers from one point to another,  unlike the cruises which make closed-loop journeys. Often ocean liners are built to a higher standard than cruise ships, in order to withstand the adverse sea conditions in open waters. They also possess larger capacity for food, fuel and other stocks for consumption. The large vessel accompanied with a high fuel consumption, makes them unsuitable for cruising. A cruise ship, on the other hand is constructed keeping in mind the passenger’s comfort and entertainment. They are therefore often described as  ‘balcony-laden floating condominiums.’ Accommodating a major part of tourism industry, cruising accounts for US $29.4 billion, with over 19 million passengers carried worldwide. As of 2017, the world’s largest cruise ship was  Royal Caribbean International’s ‘Symphony of the Seas.’

With the break of the 20th  century, the transoceanic travelling was at its peak. The present-day cruising can find its roots back to the times when the only mode of transport were the ships, and the companies competed to render the best services. The first cruising services can be traced back to  1822, when  Peninsular & Oriental Steam Navigation Company,  started with the shipping line and began delivering mail. This was recognized as the world’s oldest cruise line, which later expanded commissioning larger and more luxurious ships to serve the exploding market.

With the advent of jet aircrafts, the shift in the consumer preferences led to the terminal decline of the ocean liners. Alongside features like high fuel consumption, large storage rooms and deep draughts, prevented these ocean liners from entering shallow waters, whereas the cabins focused more on fitting passengers than providing comfort, which affected their use for non-transportation purposes. Therefore, the introduction of the cruise ships, was ideal at that time. It brought back the lost customers to indulge in sea voyages as part of leisure activities. The relatively shorter routes of the cruise ships have allowed them to stop at exotic locations, make more room in the cabins and showcase open designs that exudes extravagance. It often matches the hospitality of a five-star hotel on land.

The cruise ship operators also known as cruise lines, are the companies that market cruises for public use. Partly in  transportation business  and partly in leisure entertainment business, the cruise lines serve a dual character. There are different services and facilities available for the passengers. Almost all cruise ships have fine-dining provisions, included in the cruise price. In addition, they  boast casinos, fitness centers, spas, cinemas, swimming pools, libraries and clubs. They bring to their passengers the best of hospitality served on one platter, alongside some of the best natural views.

Sailing mostly the  Caribbean  and the Mediterranean region, the cruise ships handle a worldwide cruise tourist accounting to 14 million, annually. One of the main regions for cruising is  North America  followed by continental  Europe,  where the fastest growing segment is in the  Baltic Sea.

The ‘2018 State of the Cruise Industry Outlook,’ released by the ‘Cruise Lines international Association,’ offers an in-depth look at the global economic impacts of the cruise industry as well as the trends effecting the industry. Data reveals  20.5% increase  in the passenger’s numbers, in past five years. This will be met with more ships scheduled to set sail in 2018. CLIA, will be debuting 27 new ocean, river and specialty ships  in the coming year. Supporting more than 1 million full-time employees,  the global economic impact of the cruise industry generated US $126 billion in total revenue worldwide.

Trends show  Australasia’s  cruise industry as a key contributor to this strong reported growth. 44% of all unique cruise ship passengers were Australian citizens. This was followed by 20% from United States, 13% from New Zealand, 8% from United Kingdom, 4% from Canada, 11% from other countries. The peak months for cruising being October to April, also saw an exceptional busy offseason month of June, in 2018. There are various factors seen as influencing agents to the cruise expenditure movements. These include  ship voyages, port visits, a transit versus exchange cruise, cruise ship capacity, a boutique versus large ship cruise, weather events, economic conditions and exchange rates.

The CLIA, has also forecasted the  top nine cruise travel trends  in the year 2018. Disclosing that populations from all  income brackets  indulge in cruising, it estimates that households with lower-incomes will take cruise voyages. The travelers will also be seen seeking  “transformational” experiences. This is described as ranging from cultural immersion to extreme adventures. Other features of the report include  sustainability at sea, with greater focus on sustainable tourism, expanding  itineraries and destinations  as millennials get into river and small ship cruising,  health and wellness trips  with additional facilities of spas and wellness seminars and  traveler-friendly onboard technologies.

The core factors like  port-handling the influx and the  added capacity  to the cruises, will play a determining role for the industry’s future. With China emerging as the latest inclusion to the cruising industry, it poses a great pricing challenge. In case of  Europe,  a handful of ships are being added back to contain the tourist influx. The lively, flexible and participative features of cruising, has appealed to people and has brought changes in the cruising trends lately.

Below lying table mentions the countries contributing to the highest number of cruise passengers: