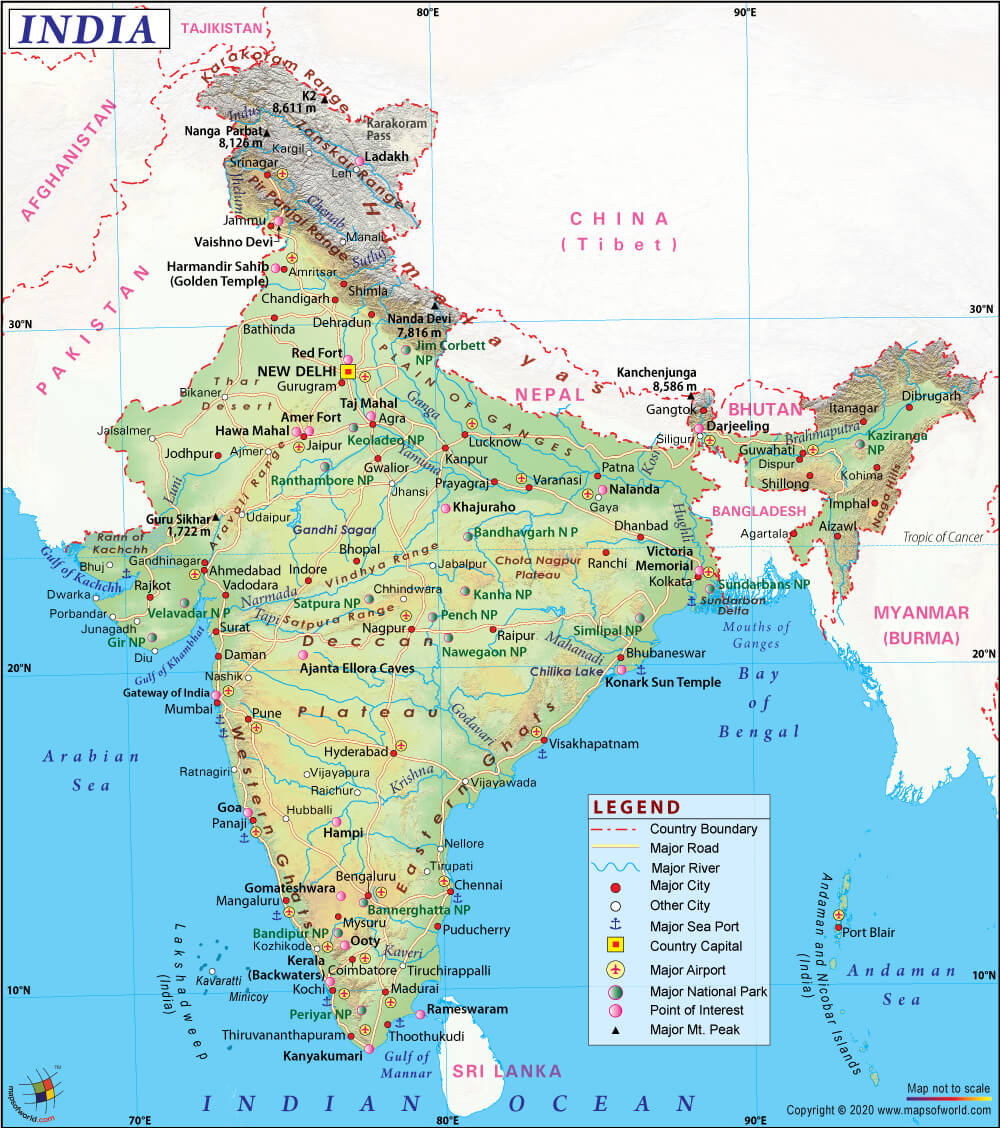 India, officially known as the Republic of India, is a country in the continent of Asia. Located in South Asia, India is a country of diverse natural resources, cultures, customs, and climates. India is the seventh-largest country by Area, covering 3,287,263 square kilometers (1,369,219 sq mi). The country is home to the Indus Valley Civilization and the birthplace of four major religions: Hinduism, Buddhism, Jainism, and Sikhism. The country is a federation with a parliamentary system of government. The prime Minister is the Head of Government, while the president is the Head of the state. India is a sovereign, democratic republic with Delhi as its National Capital Territory. There are presently 28 states and 8 Union territories in the country, with 36 entities. Check key facts about India to learn more about the country.

One can explore mapsofworld for more details about the national flag of India. The National flag of India is a horizontal tricolor flag consisting of three equal and horizontal bands. The flag features a saffron band (top), White (middle), and green bar (bottom). The middle stripe of the Indian flag features the national emblem, that is, a blue spinning wheel, the “Ashoka Chakra.” The Indian national flag was adopted at the meeting of the Constituent Assembly on July 22, 1947, and designed by a freedom fighter. The interpretations of the Indian flag’s colors are as follows:

The official emblem of India is the Lion Capital of Ashoka, which represents four Asiatic lions standing back to back mounted on a circular abacus.

India Location Map shows the exact location of India on the world map. The country is located in South Asia and lies north of the equator. The Indian Ocean bounds India on the south, the Arabian Sea on the southwest, and the Bay of Bengal on the southeast. India shares its land borders with Pakistan to the west, Bangladesh, Myanmar (Burma) to the east, and China, Nepal, and Bhutan to the northeast. India’s Andaman and Nicobar Islands share a maritime border with Thailand and Indonesia. India also lies in the proximity of Srilanka and Maldives in the Indian Ocean.

The capital of India is New Delhi, a part of the National Capital Territory of Delhi (NCT). The capital is the seat of all three branches of the government of India, including Rashtrapati Bhavan, the Supreme Court of India, and the Parliament House. New Delhi is a municipality within the National Capital Territory of Delhi, mainly covering Lutyens’ Delhi and a few adjacent areas. The municipal area administered by NDMC is part of a larger administrative district, the New Delhi district. During the Delhi Durbar of 1922, the foundation stone of New Delhi was laid by George V. Delhi and was designed by British architects Edwin Lutyens and Herbert Baker.

The republic has had only one time zone since 1947, even though it spans two geographical time zones. India has officially observed India Standard Time (IST), which equates to the UTC+5:30 offset that has been used as the local Standard Time in India since 1906. The country observes India Standard Time all year. In the Indian Time zone, there are no Daylight Saving Time clock changes. Check India’s Time Zone Map to learn more.

The physical map of India has all the valuable details about the topographic features of India. The country is the seventh largest in the world by size and has a coastline of 7,516.6 km (4,672). The country has varied landscapes bordered along the eastern, western, and southern coast by the Bay of Bengal, the Arabian Sea, and the Indian Ocean. India is divided up into several central regions geographically. It includes:

The Climatic conditions of India consist of a wide range of weather conditions ranging from the tropical climate in the south to temperate and alpine in the Himalayan north. The Himalayas and the Thar Desert strongly influence the climate of India. India hosts six major climatic subtypes based on the Koppen system ranging from alpine tundra and glaciers in the north, arid deserts in the west,  and humid tropical regions supporting rain forests in southwest and Island territories.

In the fifth century, under the reign of Ashoka, the Unification of India happened, and Buddhism spread in many parts of Asia. The eighth century saw the coming of Islam to India for the first time. By the eleventh century, Islam had firmly established itself as a political force in India, resulting in the Delhi Sultanate. It was finally succeeded by the Mughal empire and achieved considerable political unity.

In the 17th century, Europeans came to India, coinciding with the Mughal Empire’s disintegration, paving the way for regional states. The first rebellion, which sought to restore Indian supremacy, happened in 1857-58 but was crushed with the subsequent crowning of Victoria as empress of India. Finally, in 1947 India gained Independence from British Empire and became an Independent country.

The India Map with Cities depicts details about the major cities in India. The country is home to many beautiful and famous cities with world-famous tourist destinations. Some of the major cities of India are:

Airport Authority of India (AAI) manages a total of 137 Airports, of which 24 are International Airports, 103 Domestic airports, and ten custom Airports. Check India Airports Map to learn more. The Top ten busiest airports in India which offer flights to International destinations are:

Ans:  India is located north of the equator in the continent of Asia. The country occupies the more significant part of South Asia.

Faq #2: What Is The Capital Of India?

Ans: New Delhi is the capital city of India

Ans: India is home to one of the oldest civilizations in the world, the Indus Valley Civilization, which was inhabited approximately 250,000 years ago.

Ans: India is not a member of NATO, and the main reason is India is not in the North Atlantic or anywhere close to the Atlantic.

FAQ #6: Is India a third-world country?

Ans: “Third world” is an outdated phrase not used commonly anymore. India was classified as a “third-world country in 1947 at Independence. Over the past seven decades, the GDP of India has grown from 2.7 lakh crore to Rs 150 lakh crore.

FAQ #7:What language is spoken in India?

Faq #8: How many states are in India?

Ans: There are 28 states and 8 Union territories in India.

FAQ #9: When did India gain Independence?

FAQ #10: What was the French and Indian war?