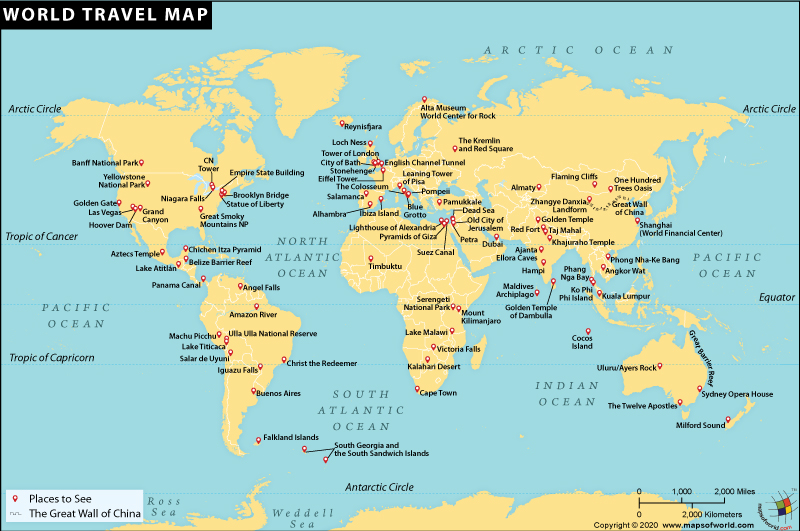 With rising incomes and improved living standards in many parts of the globe, 'world travel' is increasingly becoming a buzzword among a large cross-section of people.
The world is therefore witnessing a rising breed of international travelers many of whom do not hesitate to take a break from their established careers or opt for a gap year simply to travel around the world. Many others head to international destinations regularly for periods ranging from a weekend break to longer stays of even a month. The world travel map on this page provides a snapshot of the features and locations that should find a place in every discerning traveler's travel map. The world travel map incorporates the distribution on a global scale of such features and locations as world cities, international airports, world shopping destinations, famous monuments and landmarks, museums, national parks and nature reserves, beaches, ski resorts, archaeological sites, camping sites, and locations for adventure tourism activities.

International Airports : The first impression that a traveler gets of the country she is visiting is at the airport where she first lands. The world map shows the location of some of the world's best airports including London Heathrow, Paris Charles De Gaulle, Frankfurt Airport, Amsterdam Schiphol, New York's JFK and Newark, Bangkok Suvarnabhumi, Singapore's Changi, Hong Kong Airport, Tokyo's Narita, and Sydney's Kingsford Smith.

Shopping Destinations : Certain tourist locations around the world are more famous for their shopping arcades and duty free shopping malls than their other tourist sights. The world travel map shows the location of some of the world's top shopping destinations including Milan, Paris, New York, Dubai, Singapore, Bangkok, and Hong Kong.

Famous Landmarks : There are around the world certain monuments and landmarks that in themselves epitomizes the whole travel experience of the city or country where they are located. The world travel map shows the location of such world famous sights and landmarks including the Golden Gate Bridge in San Francisco, the Statue of Liberty in New York, the ruins of Machu Picchu in Peru, the Eiffel Tower in Paris, the Tower Bridge in London, the Brandenburg Gate in Berlin, the Acropolis in Athens, the Pyramids of Egypt, the Taj Mahal in India, the Temple of the Emerald Buddha in Bangkok, the Petronas Towers in Kuala Lumpur, the Singapore Merlion Park, the Great Wall of China, the Angkor Wat in Cambodia, the Borobudur Temple in Indonesia, and Sydney's Harbour Bridge and Opera House.

Museums : Museums are vast store houses of a country's history and culture and some of the world's great museums require not hours, nor days but years of repeated visits to do justice to all of their exhibits. This world travel map shows the location of some of the world's greatest museums including the Louvre in Paris, the British Museum in London, the Rijksmuseum in Amsterdam, and the Hermitage in St. Petersburg.

National Parks and Natural Wonders : Nature tourism and eco tourism is also increasingly becoming popular not only with nature enthusiasts but also with mainstream travelers who want to get away from it all. The world travel map shows the location of some of the world's greatest national parks including the Yellowstone National Park in North America, the Serengiti National Park and Kruger National Park in Africa, and the Corbett National Park, the Kanha National Park and the Kaziranga national Park in India. The world travel map also shows the location of some of the world's greatest natural wonders including the Niagara Falls, the Grand Canyon, the Florida Everglades, the Amazon Rainforests, the Yorkshire Dales, the Loch Ness, the Calanque of Mediterranean France, the Table Mountain, the Himalayas, and the Great Barrier Reef. These national parks and natural locations also provide the enthusiastic traveler many opportunities for outdoor activities like camping, mountaineering, hiking, trekking, rafting, swimming, sky diving, gliding, snorkeling and other adventure activities. Here is a list of US national parks.

Beaches and Beach Resorts : There is also one segment of holidaymakers who travel because they seek sea, sand, and the sun. The world travel map represents the distribution of some of the world's most fabulous beaches and beach destinations including Copacabana in Brazil, the Bahamas in the Caribbean, the beaches of the Canary Islands and Spain, Nice and the beach resorts of the French Riviera, Goa in India, Phuket and Pattaya in Thailand, and Bondi and manly beaches in Sydney, Australia.

Ski Resorts : While some travelers seek the sea and sun, there are others who travel to colder climate to enjoy the joy of skiing and winter sports in the slopes of the European Alps or the Indian Himalayas. The world travel map shows the distribution of ski resorts in the mountains of Canada, United States, the Swiss Alps, the French and Italian Alps, the Austrian Alps, the ski slopes of Kashmir and Himachal Pradesh in India, the ski slopes in Japan, and the ski resorts in the Southern Alps in New Zealand and Australia.

The word 'map' originated from the Latin word 'mappa' which meant a napkin or paper. Why so? Because these were the usual materials the earliest maps were drawn on.