Has any host team won the World Cup? - Answers 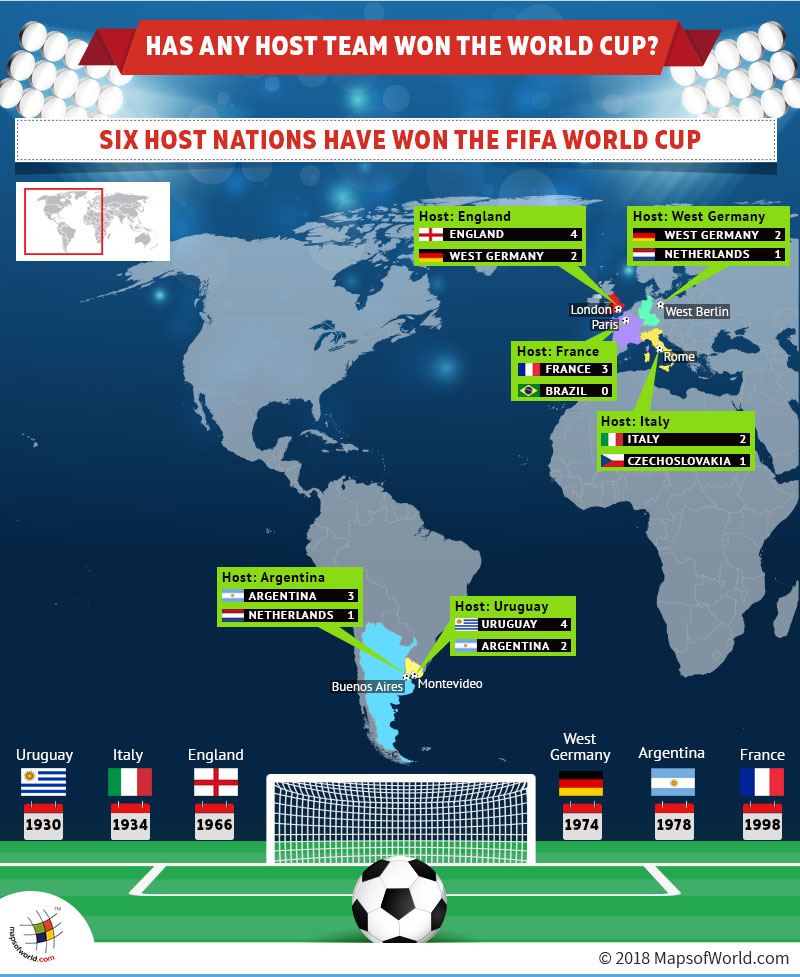 The six countries are

The first FIFA World Cup was organized in Uruguay, and the host nation beat arch-rivals Argentina 4-2 in the finals to become the first nation and the first host nation to lift the World Cup. All matches along with the finals were played at one venue – Estadio Centenario in Montevideo.

As expected, the excitement around the much-awaited encounter in the finals between Uruguay and Argentina reached its peak as 80,000 passionate spectators, including 30,000 from Argentina, filled the stadium to capacity. Uruguay was all set to take on Argentina once again, having beaten them in the Olympic final two years earlier.

Much was expected from the rising Argentinian star – Guillermo Stabile who contributed two goals in the 6-1 rout of the USA in the semi-finals. He didn’t disappoint, scoring one of the two first-half goals for Argentina. Uruguay came back strong in the second half to equalize before the one-armed player, Hector Castro scored the winner for the host team just minutes before the final whistle, and Uruguay created history by winning the first FIFA World Cup on July 30, 1930.

The tournament was played by 13 teams, scoring a total of 70 goals spread over 18 matches and watched by a total of 590,549 spectators.

Italy became the first European nation to win the FIFA World Cup beating Czechoslovakia in the final. This World Cup is also on record for a previous winner not defending its title. Uruguay, the winner in 1930, did not participate in the 1934 World Cup in retaliation to Italy not attending the inaugural tournament in Uruguay four years earlier.

The 16-team tournament saw South American stars Argentina and Brazil make first round exits. Italy reached the final beating Spain 1-0, while Czechoslovakia beat Germany 3-1 in the semi-final. Oldrich Nejedly of Czechoslovakia scored a hat-trick in this match and would go on to win the Golden Boot in this World Cup.

The host nation got past Austria 1-0 to make it to their first World Cup final.

On June 10th, all roads led to Rome. Over 50,000 spectators packed the PNF Stadium to watch the much-awaited final match between Italy and Czechoslovakia, which drew spectators from all over Europe. For the first time, the live commentary was broadcasted over the Radio to 12 countries.

The final was a close encounter with Czechoslovakia drawing first blood in the 76th minute. Italy countered with a saver to draw level in the 81st minute. The match went into extra time. It was Guaita’s goal that saw Italy lift the 1934 World Cup.

70 goals were scored across 17 matches during the World Cup and watched by 3,63,000 spectators.

July 30, 1966, saw a historic final played out between two talented football teams as England took on West Germany. The final was played out at the packed Wembley Stadium before 96,924 football-crazy fans. It was to emerge as the most watched television event in the U.K. at the time, with 32.30 million fans remaining glued to their television sets.

The final saw England’s Geoff Hurst score the only hat-trick ever in a FIFA World Cup final as Bobby Moore-led England outplayed West Germany in extra time, to win 4-2.

The tournament is remembered for the magical skills of Portuguese legend Eusebio, who won the Golden Boot scoring nine goals in the tournament.

The final was played out before 75,200 fans at the Olympiastadion in West Berlin. Two of football’s greatest players ever took to the field; Franz Beckenbauer led Germany and Johan Cruyff, The Netherlands.

The first minute of play had Johan Cruyff being brought down in the German area, and Johan Neeskens made no mistake in converting the penalty for the Netherlands. In the 25th minute, Germany won a penalty, and Bernd Hölzenbein made no mistake in equalizing the score. It was the Golden Boot winner in 1970 World Cup, Gerd Mueller, who scored the winning goal for Germany.

The tournament saw a record attendance of 1,545,791 attending 38 matches which resulted in a total of 102 goals scored.

The final was played at River Plate Stadium in Buenos Aires. It was Netherlands’ second consecutive finals after 1974 and once again it was to lose to the host side in the finals. The ill-tempered match was closely fought with the tournament star and Golden Boot winner, Mario Kempes, scoring two goals to ensure Argentina held the World Cup.

The final was expected to be a closely fought contest between, Brazil, who brought their version of attractive South American football, and France who demonstrated their mastery with the European style of play. It was the talented Zinedine Zidane that stood between Brazil and the World Cup. He scored two of France’s three goals to ensure the host nation would hold their World Cup for the first and only time.

Visit the following to learn more about World Cup Football: