What countries have largest warning signs on tobacco packages? - Answers 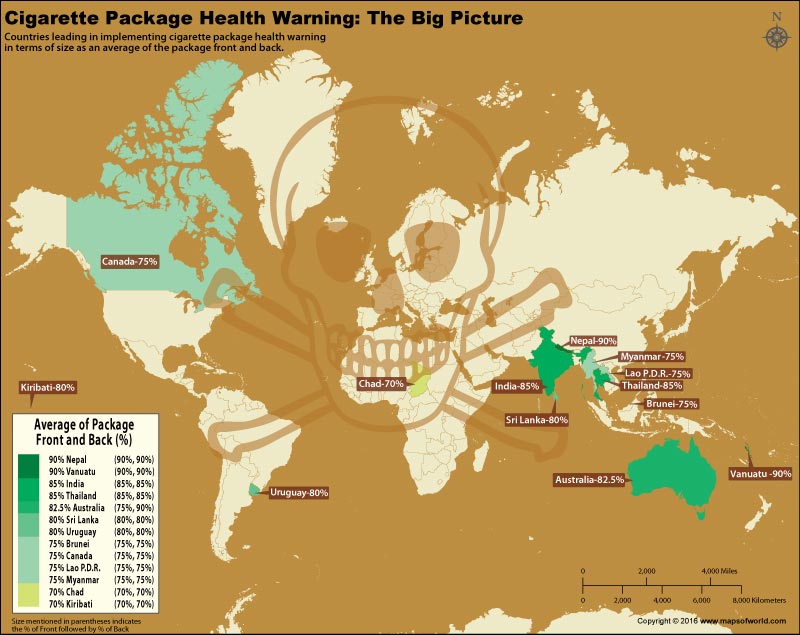 Tobacco-related diseases, which are on the rise, have forced many countries around the world to adopt stringent laws. Prime among these is the display of pictorial warnings on cigarette packs and other tobacco related products. Earlier, tobacco packages carried no warning about the harmful effects of tobacco products. However, in 2001, Canada became the first country in the world to put such warnings on tobacco packages.

Over the years, more countries began to carry such warnings and by the end of 2014, pictorial warning had been implemented by more than 77 countries/jurisdictions. In 2008, just 24 countries required warning to cover 50 percent of the front and back (on average) of the tobacco package. This figure rose to 60 in 2014 and today stands at 94 countries. But, the number of countries that on average cover 65 percent of the front and back of the package with pictorial warning is 43. However, the difference lies in the size of the warnings. Every country has set its own standards regarding the size of the pictorial warning. While in some countries, the size may be barely legible, in others it is huge.

As per the Cigarette Package Health Warnings: International Status Report, Nepal has the largest pictorial warning on tobacco packages. In the Himalayan nation, pictorial warnings cover an average of 90 percent of the front and back of the tobacco packages. This is up from 75 percent in 2014. Joining Nepal in 2017 would be Vanuatu where pictorial warnings would cover 90 percent of the front and back of the packages. In India and Thailand, which are placed third, pictorial warnings cover 85 percent. India has made a remarkable achievement by bagging the third spot. The country was placed at the 123rd position in 2012 but fell to 136 in 2014. Thailand ranked first in 2014 but slid down to the third spot in the latest report.