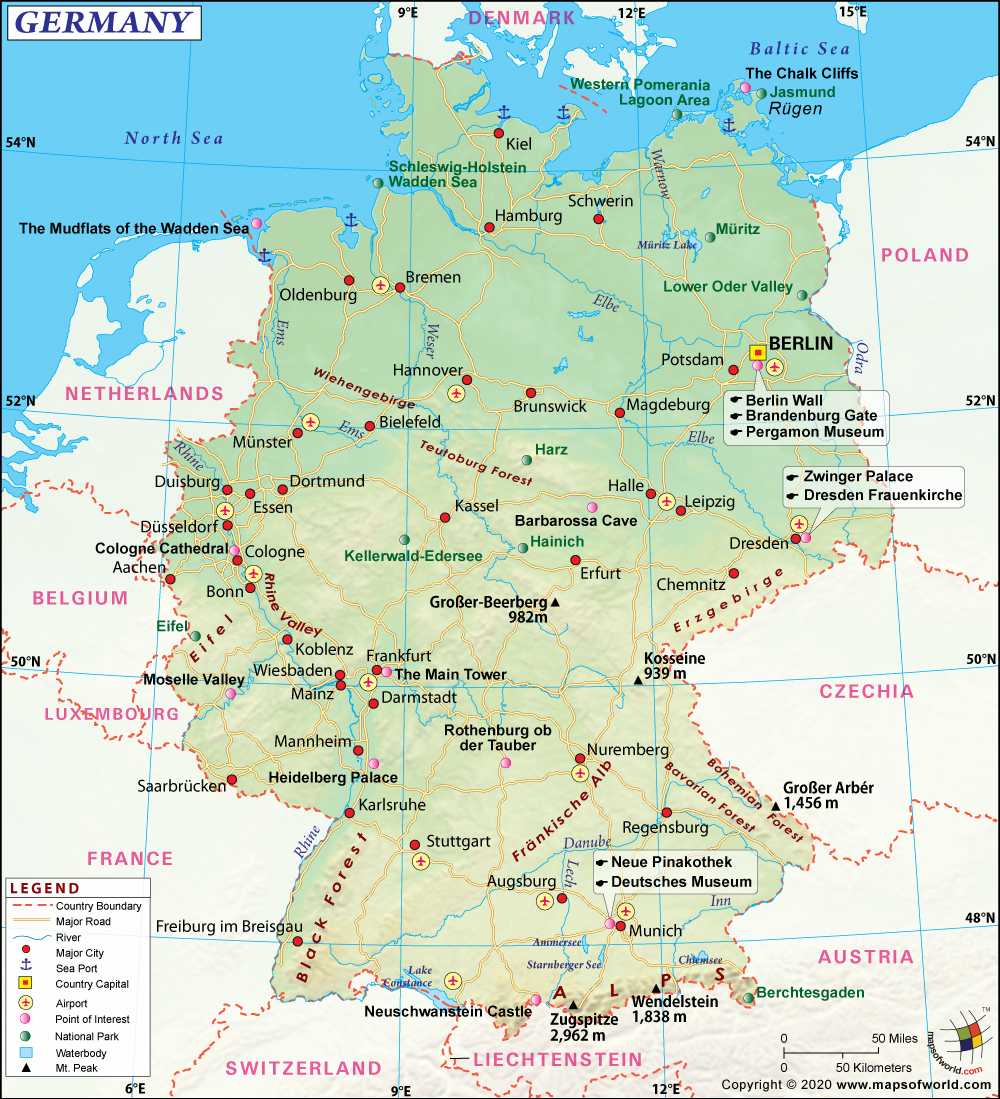 The Federal Republic of Germany spans over 137,847 square miles and is home to more than 82 million people. This Map of Germany points out the best attractions of the beautiful country, such as Frankfurt, where the world’s largest book fair is held; Munich, where Oktoberfest is a prime attraction; the Neuschwanstein Castle; the Cologne Cathedral; and the Dresden Frauenkirche. Germany is one of the most urbanized countries in the world. Among the important cities on the map, Bonn, Frankfurt, Nurnberg, Stuttgart, Hanover, Hamburg, Bremen, and Dusseldorf stand out. The map also clearly marks out the rivers that crisscross Germany – Rhine, Ems, Weser, Danube, Elbe, Inn, and Lech among others. This map also gives you an overview of the major road network and the important airports of the country.

A western European country, Germany is blessed with beautiful landscapes of mountain ranges, rivers, forests, and beaches. Having a history that dates back to more than 2 millennia, it has many cultural and historical gems, such as sites related to WWII. Its capital Berlin is popular for its art scene.

The history of the Germanic people dates back to the Nordic Bronze Age or the Pre-Roman Iron Age. At the time, they were concentrated in the far north of modern-day Germany and Scandinavia and from there on expanded south, east, and west. The period, thereafter, witnessed the emergence of many Germanic tribes.

In 800, the Frankish king Charlemagne established the Carolingian Empire. In 843, the empire was distributed among the heirs of Charlemagne. In 962, German Territories became a central part of the Holy Roman Empire. King Otto I of Germany became the Roman emperor.

In 1250, Emperor Frederick II Hohenstaufen died and the empire began to collapse. Thereafter, independent territories were formed. In 1438, the Habsburg dynasty was established. From 1618 to 1648, the region witnessed the devastating Thirty-Year’s War.

From 1914 to 1918, Germany played a major role in World War I, signing an armistice after their defeat in 1918, and Emperor William II was exiled. The Treaty of Versailles in 1919 forced Germany to give back its colonies and pay reparations from the war. The same year, the Weimar Republic was formed with a new constitution, and during its first years, the country struggled economically.

In 1923, Germany saw the rise of Adolf Hitler, who headed the National Socialist German Workers Party. After years of unemployment and depression in Germany in the late 1920s and early 1930s, Hitler became chancellor in 1933, soon proclaiming the Third Reich in 1934. During this time, the persecution of Jews began, sometimes depriving them of citizenship. From 1939 to 1945, Germany played a central role in World War II. The genocide of millions of people (especially targeted groups like Jews, Gypsies, Slavs, homosexuals, and the disabled) occurred from 1942 to 1945, now known as the Holocaust. Germany was defeated in 1945, and the Allied Nations then divided and occupied the country. The US, French, and British divided West Germany among themselves into thirds, along with West Berlin. The western half of Germany became the Federal Republic of Germany, while the Soviets controlled the east, which they turned into the communist German Democratic Republic. The Berlin Wall was constructed in 1961, physically dividing the city’s two halves.

The Berlin Wall was finally torn down in 1989, and Germany began to reunify for the second time in 1990, with Berlin as the capital. The Allied and Russian forces remained in Germany until 1994.

In 2002, Germany adopted the Euro as their currency, replacing the Deutsche Mark (DM). Like much of the rest of the world, Germany faced an economic recession from around 2008 to 2010.

Situated in Central and Western Europe, Germany shares borders with Denmark at the north, Switzerland, and Austria at the south, the Czech Republic and Poland to the east, Luxembourg and France at the south-west, and Netherlands and Belgium at the north-west. It is the seventh-largest country in Europe and the 62nd largest in the world. It covers an area of 137,847 square miles and has a 1484-miles-long coastline. The terrain of the country varies from lowlands in the north, uplands in the centre, and the Bavarian Alps in the south. The largest region of Germany comprises Lowlands. Neuendorf bei Wilster is the lowest point at -3.54 meters, while Zugspitze is the highest point at 2,963 meters.

Zugspitze is the highest peak in Germany. It lies on the border between Germany and Austria. Conquered first on August 27, 1820, by Josef Naus, Zugspitze has an elevation of 2,962 meters. It is followed by Schneefernerkopf (2,875 m) and Middle Wetterspitze (2,747). Other important mountains in the country are Hochvogel, Vollkarspitze, and Ofnerspitze.

The Chancellor and President of State are the most important executives of the German Government. They are the representative of Government and State respectively with clearly defined legislative powers and duties to perform.

The federal parliamentary representatives set a democratic republic government in Germany. The Federal Chancellor is the supreme power in Germany.

The Government of Germany (German: Deutschlandkarte) holds executive powers. The two sections of Parliament which are the Bundestag and Bundesrat exercise federal powers. The Christian Democratic Union and Social Democratic Party have had huge power since 1949.

Surprisingly, the German Judiciary is not in control of the legislative and the executive bodies. The constitution of Germany points out the amendments in the government structure after the German Reunification.

According to the Constitution, power is divided between the judicial, federal, executive and legislative departments. The Weimar Republic failed in 1933 and the Third Reich came into power.

The Bundestag comprises of 598 members. It is elected for four years. The single-seat constituency holds 299 members and the other 299 members belong to the state constituency. A five per cent vote must be gained by each party to maintain its place in the Bundestag. This is called the five per cent rule which was introduced by the German Election Law. This stopped the political division of the parties.

Bundesrat represents the state government on the federal rank. It comprises 69 members. The State government sends the voting orders to the members of Bundarest.

Germany’s judicial branch governs itself. It monitors all the state actions. The judicial department controls all the criminal and civil issues. The State looks after the lower courts. Apart from the judicial body, there is a Constitutional Court in Germany. All the citizens of the country have the right to approach the court.

Germany is a federal parliamentary republic with the president as the head of the state at the highest level of government. The second highest official is the President of the Bundestag or parliament. The next level official is the chancellor whose role is similar to that of a prime minister.

Germany is divided into sixteen states, or lands, each with its own constitution. These states are fairly autonomous and are subdivided in different ways because of their variations in size. Berlin and Hamburg are city-states that are further divided into boroughs, while Bremen is a city-state that is split into two districts.

The subdivisions of the states can be either area associations, government districts, administrative districts, offices, or municipalities. Germany is divided into 402 districts at the municipal level. These comprise 295 rural districts and 107 urban districts.

The educational system in German Universities is a public and free-state form with a traditional pattern of organizational structure that dates back to the 19th century with more than 5,000 years of history.

Aspects of Germany Education and Jobs has got a rich lineage.

Friedrich Froebel was a German who started the concept of Kindergarten which is considered as the basic and pre-primary part of one’s education and is now well-known all over the world.

Germany (German: Deutschlandkarte) has a few types of secondary schools that vary from state to state. The gymnasium is a college-preparatory high school that ends after grades twelve or thirteen. Realschule is for intermediate students and finishes after tenth grade. Hauptschule prepares students for vocational education, finishing after ninth or tenth grade. One path for Hauptschule can be a path leading to Realschule. Another type of school is the Gesamtschule which is a comprehensive school that uses a combination of approaches. A reform movement in the 1960s sought to unify secondary education to make them all Gesamtschule.

Those on the university track and who have finished Gymnasium are eligible for higher education. The universities in Germany are usually public schools with free or low tuition fees. Students not wanting to attend university can opt for apprenticeship or vocational school. Dual education programs that combine vocational training courses alongside general education are also available.

The First Kindergarten school was established in Bad Blankenburg by Froebel in the year 1837.

Germany has more than 300 universities.

In Germany, educational responsibility lies with the state and the federal governments play a minor role in the education system. However, the federal government has the right to intervene in the educational system, only with financial aid. Most of the universities are under state authority and no tuition fee is required to get an education in these universities. One needs to pay additional fees for their ward in any non-state school.

For children between the age of ten and thirteen, school attendance has been made compulsory in Germany. A span of four years is dedicated to primary education. The secondary education system is primarily divided into four parts, they are Gymnasium, Realschule, Hauptschule and the Gesamptschule. To get admission into the university, the students are required to pass through the Abitur examination. The teachers at different levels have different qualifications.

English is a compulsory subject all over the state at the secondary level of education. Overall, Germany has a strong educational system.

Germany has a good job market in comparison to many other countries in the world. The job ranges from that of a teacher to jobs in the scientific and research sector. The IT field, banks, and many other prestigious jobs are often offered to people which provide one with a good pay package.

The first-ever book printed was in Germany.
Germany is a leading producer of solar power and wind turbines technology.
In Germany, Muller is the most common surname.
Germany is a founding member of the G20, G8, and EU.