Several ancient civilizations formed along the banks of major rivers, namely the Nile, the Indus River, the Yellow River, and the Tigris and Euphrates Rivers. 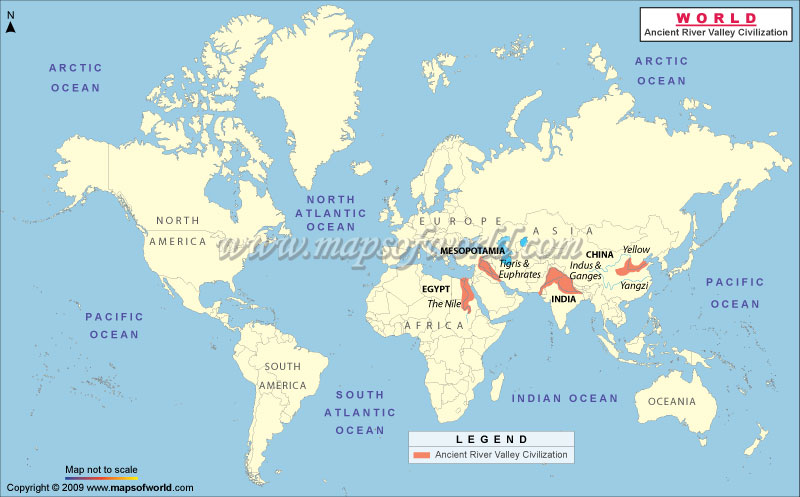 Ancient civilizations emerged during the first millennium BC in Mesopotamia, Egypt, China, and India, and settled along riverbeds for access to fresh, clean water, one of the most important requirements for sustaining a population. Not only did the proximity to rivers help by bringing fresh drinking water to civilizations in desert regions, regular floods helped bring new soils, rich with nutrients, that helped sustain the food growth and production of these settled populations.

Indus River: The Indus Valley Civilization, also known as the Harappan Civilization, settled along the Indus River in modern-day Pakistan and India during the Bronze Age.

Nile River: The ancient Egyptians of the Nile River Valley Civilization settled along the Nile River, which provided fertile lands to produce crops and support wildlife.

Yellow River: Considered the cradle of Chinese civilization, China's Yellow River gave rise to the Xia, Shang, and Zhou Dynasties. The people of ancient China had a tumultuous relationship with the Yellow River, however, because of its recurring floods that devastated the societies.


All the ancient civilizations have developed along the banks of rivers, as they provided them with their basic need that is water.

Indus River, Nile River, Yellow River and Tigris and Euphrates Rivers provided as a perfect place for the development the ancient civilizations i.e. the Harappa civilization, Nile valley civilization, Mesopotamia civilization and The Xia, the Shang, and the Zhou Dynasties.