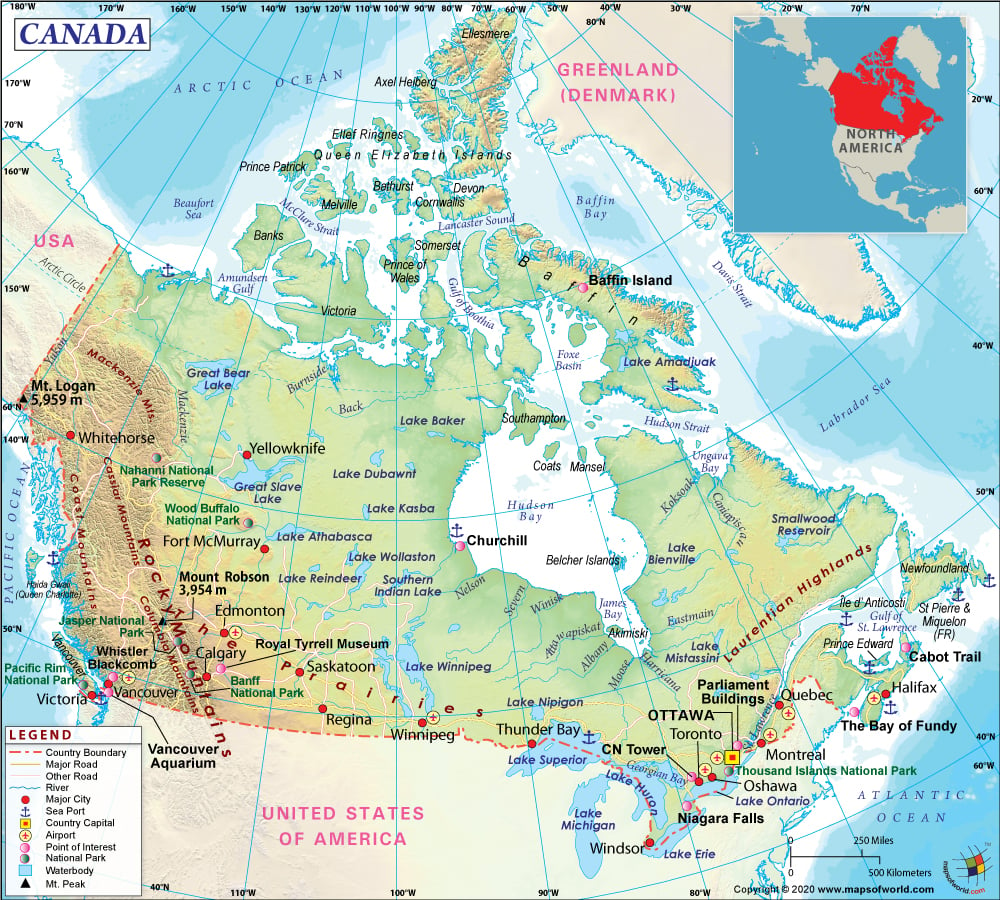 Canada is the world’s second-largest country by total area situated in North America. Canada consists of an entire area above 9.98 million square kilometers. Canada shares southern and western borders with the United States, stretching 8,891 kilometers (5,525 mi), and is the world’s longest binational land border. The capital of Canada is Ottawa, and the three most significant metropolitan areas are Toronto, Montreal, and Vancouver. Canada is a highly developed country with an advanced economy, the eighth-largest in the world. The country has the 24th highest nominal per capita income globally and the sixteenth-highest ranking on the Human Development Index.

The current flag of Canada was adopted on September 1, 2006. The design of the Canadian flag consists of three vertical stripes. The right and left stripes are red and of equal size. The center stripe is a white square and a red maple leaf in the center. The maple leaf in the center of the flag symbolizes nature and the environment representing the national tree of Canada.

The National Emblem of Canada is the Beaver. On March 24, 1975, Beaver was given official status as an emblem of Canada as a symbol of the sovereignty of Canada. The official other symbols formally adopted by the Government of Canada are:

Canada Location Map shows the exact location of Canada on the world map. The physical Map of Canada shows the boundaries of this country, neighboring countries, and oceans.

Canada is often considered a country far north that shares its land boundaries with :

The capital city of Canada is Ottawa. Ottawa is the fourth largest city in Canada and is situated in southeastern Ontario, about 250 miles (400 km) northeast of Toronto and 125 miles (200 km) west of Montreal. The city of Ottawa is situated on the south bank of the Ottawa River across from Gatineau, Quebec, at the confluence of the Ottawa (Outaouais), Rideau and Gatineau rivers. In 1857, Ottawa had named the capital of the province of Canada and retained its status when Canada became a dominion within the British Commonwealth in 1867.

The climate of Ottawa is continental, with humid and warm summers and usually cold and snowy winters. As the national capital, Ottawa boasts federal government institutions, extensive public transport, and an infrastructure system.

The geography of Canada is vast and occupies much of the Continent of North America. The country extends from the Atlantic Ocean in the east, along the Arctic Ocean to the north, and the Pacific Ocean to the west encompassing 9,984,670 km2 (3,855,100 sq mi) of territory. The country also has a vast maritime terrain, with the world’s longest coastline of 243,042 kilometers (151,019 mi). After Russia, Canada is the second largest country in the world, and in terms of land area, it ranks fourth due to having the world’s largest area of freshwater lakes. The country has over 2,000,000 lakes, of which 563 are more significant than 100 km2 (39 sq mi). Canada has a wide variety of landforms. The country is divided into the following seven physiographic regions.

Canada has a wide variety of climates due to its great latitudinal extent. Average summer and winter temperatures vary from region to region across Canada. Winters in Canada are harsh in many parts, particularly in the interior and many provinces. The northern two-thirds of Canada has a climate similar to that of northern Scandinavia, with very cold winters and short, cool summers.

The history of Canada dates back to the period from the arrival of the paleo-Indians to North America thousands of years ago. Indigenous Peoples inhabited the lands encompassing present-day Canada before European colonization. French and British expeditions explored from the late 15th century. They colonized and fought over various places within North America in what constitutes present-day America. In 1534 the colony of New France was claimed with permanent settlements beginning in 1608.

In 1791 the British Province of Quebec was divided into upper and lower Canada. By the Act of Union 1840, the two provinces were united as the Province of Canada, which came into force in 1841. The province of Canada was joined with two other British colonies of Nova Scotia and New Brunswick through Confederation, forming a self-governing entity” Canada” in 1867. In 1949, Canada expanded by incorporating other parts of British North America, finishing with Newfoundland and Labrador.

Canada is divided into 10 Provinces and three territories. One can explore the Provinces and Territories map of Canada to have the details. In alphabetical order, the provinces of Canada are as follows:

The three Territories of Canada are Northwest Territories, Nunavut, and Yukon.

As of 2022, the country has three cities with more than a million people. The largest and most populous city in Canada is Toronto. The other most populous and significant cities of Canada are Toronto, Montreal, Calgary, Ottawa, Edmonton, Mississauga, Vancouver, Brampton, and more. One can view Canada Cities Map for more details.

Canada has an alphanumeric Postal Codes format with six characters different from the ZIP code format of the United States. The first character denotes the province of address, and the second character is a district within that province. The third character in the Canadian Postal code is a letter representing the” postal zone” of the region. The last three letters are numbers that indicate a smaller delivery area. There are 876,445 Postal codes in Canada as of 2019.

Canada owing to its vast terrain and magnificent natural landscape, offers many options for travel and tourism. It is the ideal hub for outdoor activities, and visitors can enjoy trekking in the beautiful countryside and fishing in numerous lakes and rivers. Canada Travel map is for the detailed information. Some of the most popular tourist destinations in Canada

FAQ #1: What currency does Canada use?

Ans: Canadian dollar is the currency of Canada

Faq #2: What Is The Capital Of Canada?

Ans: Ottawa is the capital city of Canada, located in the province of Ontario

Faq #3: Is Canada a democracy?

Ans: The country is a parliamentary democracy, a federation, and a constitutional monarchy. The parliament of Canada consists of three parts: the Queen, represented by the governor general; the Senate; and the house of commons.

Faq #4: Where is Quebec in Canada?

Ans: Quebec, the sole Canadian province where citizens of French are in the majority, is located in the eastern part of Canada. The issue of Quebec’s state of being self-governing dominated Canadian politics for the last decades of the 20th century

Faq #5: Where is Canada located?

Ans: Canada is located in northern North America, covering 41% of the Continent. The country shares the longest border in the world with the United States.

FAQ #6: When was Canada founded?

FAQ #8: How many provinces are in Canada?

Ans: There are ten provinces and three territories in Canada.

Ans: Alberta is located in western Canada and is one of the three prairie provinces. Alberta shares its boundaries with British Columbia to the west, Saskatchewan to the east, the Northwest Territories (NWT) to the north, and the U.S state of Montana to the south.