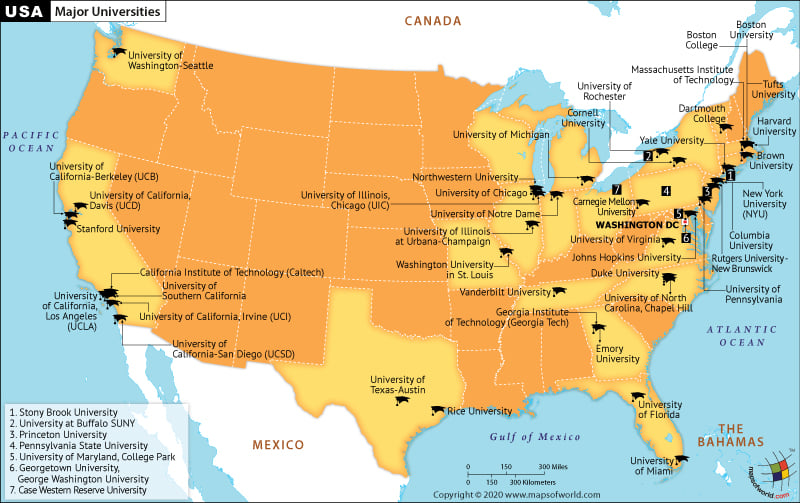 Are you looking to study at top universities in the USA? Get the list of best US universities and detailed information on class sizes, the student-faculty ratio, the tuition costs, and the student experience for each of the top colleges and universities. More than 20 top universities, including the Ivy League institutes such as Harvard, Princeton, and Yale, have been listed along with their complete details.

It is an ideal guide for students willing to pursue higher education in the US.

Based on the latest ranking of colleges and universities, we have listed the most sought-after institutes to help students do a comparative analysis of various factors. The clickable map of US Universities makes it easy for you to locate an institute. Click on any of the universities in the table below to get detailed information on that specific institute.

Browse the state-wise list of universities in the US and find out the right college that would serve your purpose. It not only has an exhaustive list of Top 50 Universities and colleges according to their rank but also provides necessary information on the cost of studying and the total student population in each institute.

Top 10 Universities and Colleges in USA in 2020

1. Harvard University, Massachusetts
Harvard University was founded in 1636. It is located in the city of Cambridge in Massachusetts, close to Boston. Its huge library system is home to the oldest collection of books in the United States, which also happens to be the largest private collection in the world. However, if you think Harvard is all about diving deep into books only, you are thoroughly mistaken. The University athletic teams compete in the Ivy League, and the Harvard and Yale football teams are old rivals. The on-campus residential housing is an intrinsic part of student life at Harvard.

2. Stanford University, California
Stanford University was founded in 1885 by Jane and Leland Stanford in memory of their only child. The University’s pristine campus, one of the largest in the United States, is located in California’s suburban Bay Area some 30 miles from San Francisco. The University is home to a wide range of student organizations such as the Stanford Pre-Business Association and the Stanford Solar Car Project. The University has three academic schools and four professional schools. It is one of the top fundraising institutions in the country. Its faculty and alumni have founded several companies that earn over $2.7 trillion in annual revenue. It is the alma mater of many US Congress members, astronauts, billionaires, Turing Award, and Nobel laureates.

3. Massachusetts Institute of Technology, Massachusetts
Established in 1861, the Massachusetts Institute of Technology (MIT) is an independent, private research university based in Cambridge, Massachusetts. The five different schools of MIT are engineering, humanities, arts, and social sciences, management, and science, besides architecture and planning. The University is connected to as many as 85 Nobel Laureates, 58 National Medal of Science recipients, 45 MacArthur Fellows, and 29 National Medal of Technology and Innovation winners. Scientific and technological advances attributed to MIT include the first chemical synthesis of penicillin, development of the radar, the discovery of quarks, and the invention of magnetic core memory, which paved the way for the development of digital computers.

6. The University of California, Los Angeles (UCLA)
The University of California, Los Angeles (UCLA) is one of the ten campuses of the University of California system and is the second oldest in the system. It was founded in 1919. During the 2017-2018 year, UCLA received 102,225 undergraduate applications, making it the most applied to University in the United States. UCLA offers more than 3,900 courses in 109 academic departments. As many as 24 Nobel laureates have been associated with UCLA, some of them are Randy W. Schekman for Medicine, Donald Cram for Chemistry, and William Sharpe for Economics. Other notable people include Pulitzer Prize winner geographer Jared Diamond, actor and director Leonard Nimoy, and the fifth governor of the state of Hawaii Ben Cayetano.

7. Yale University, Connecticut
Yale University is a private Ivy League Research University located in New Haven, Connecticut. Its history goes back to 1701 when it was founded as the Collegiate School in Saybrook, Connecticut, before moving to New Haven 15 years later. It was renamed Yale College in 1718 in honor of Welsh benefactor Elihu Yale. In 1861, it became the first University in the US to award a Ph.D. The main campus spans 260 acres of New Haven, and some of its buildings date back to the mid-18th century. The University comprises 14 schools covering humanities and arts, sciences, and social sciences. Students are also trained in quantitative reasoning, writing skills, and foreign languages.

8. University of Pennsylvania
The University of Pennsylvania, also known as Penn, came into existence in 1740, and it is one of the colleges that formed before the Declaration of Independence. The University of Pennsylvania is also one of the Ivy League research Universities. Benjamin Franklin, one of the founding fathers of the United States, is credited to be the founder of this University. There are four undergraduate and 12 graduate and professional schools in Penn. As of Fall 2019, there were 22,318 full-time and 4,357 part-time students in Penn. This University is credited with several innovations and discoveries. Some of them are ENIAC, the first general-purpose electronic computer, COBOL programming language, dialysis machine, and many more.Some famous people who graduated from Penn include some of the founding fathers of the United States, two presidents of the United States including current president Donald Trump, Warren Buffet, one of the greatest investors of America, and Elon Musk, founder of Tesla and SpaceX.

9. Princeton University, New Jersey
Founded in 1746, Princeton University is among the oldest colleges in the United States. It is located in the quiet suburban town of Princeton in New Jersey. The University campus has on offer, many events, activities, and organizations apart from a thoroughly engaging academic environment. Its old-world ambiance is especially perceptible in the Nassau Hall, which was the temporary capitol building of the United States in 1783. This Ivy League institution is one of the best research universities in the world with connections to more than 40 Nobel laureates, 17 National Medal of Science recipients, and five National Humanities Medal winners.