The purpose of a Political Map is to show the territorial boundaries of countries, states, and other administrative divisions. The Political map of the world here depicts all independent nations as well as some dependent territories with vibrant and contrasting colors for visual clarity. It includes 193 UN member countries, two non-member observer states, and other dependent and partially recognized territories. The map is in Robinson projection. 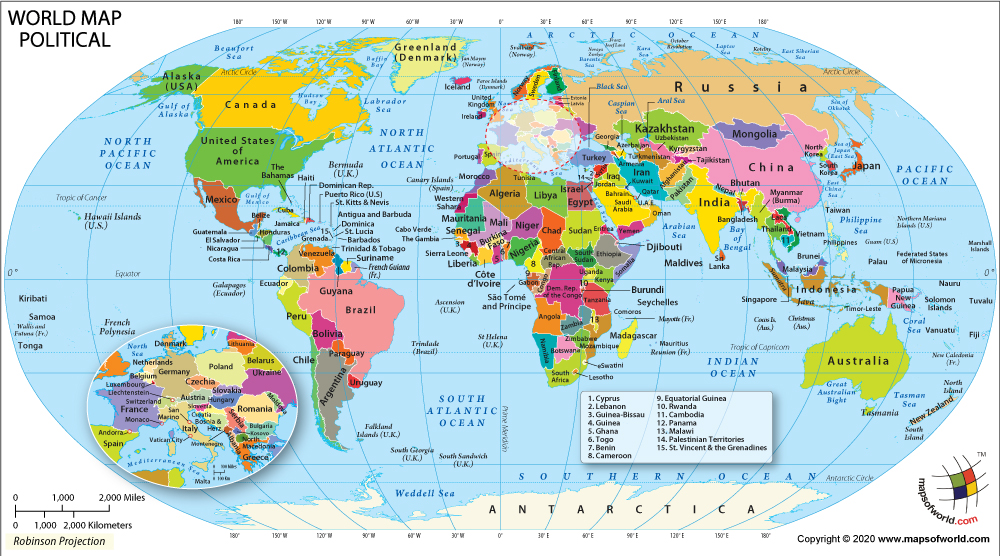 In the political world map, some of the borders are created by geological features such as mountains and rivers, while others are solely politically demarcated. The map follows the latest globally accepted standards for national boundaries.

Some of the largest independent nations in the world are the Russian Federation, People's Republic of China, the United States of America, Canada, Australia, India, Brazil, Saudi Arabia, and Argentina. While the smallest nations include Vatican City, Monaco, Andorra, and Singapore.

As represented on the world map, some countries like Brazil, Australia, the USA, and Indonesia have long coastlines, while others are completely landlocked like Bhutan, Switzerland, Mongolia, and Lesotho.

The world political map shows dependent territories such as Greenland and the Faroe Islands of Denmark, as well as the French Overseas Territories, which are geographically and culturally distinct, enjoying some degree of autonomy but are not independent states.

The globe map also represents the Special Administrative Regions like Hong Kong SAR and Macau SAR that possess most of the characteristics of an independent nation under the one country two systems' policy. These territories enjoy substantial autonomy, yet are integral parts of the People's Republic of China. It is the division of the world into separate political entities that denote the political boundaries.