What are the Highest Waterfalls in the World? - Answers 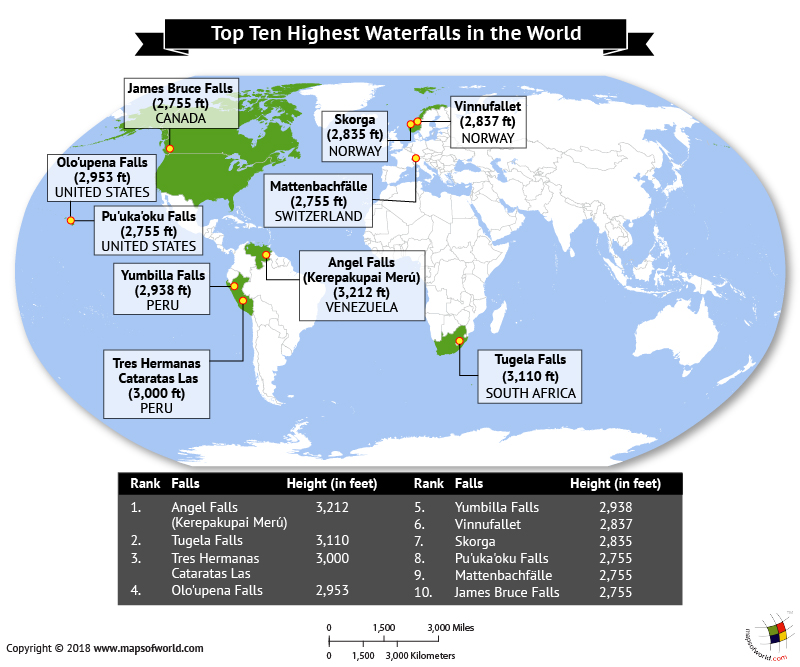 On hearing the word ‘waterfall,’ the idea of stark white water flowing from high altitude pops in our head. There are abundant waterfalls around the world. While some are magnificent in size and some are magnificent in beauty. The World’s highest waterfalls are compiled by the World Waterfall Database. Created as a long-term project, the World Waterfall Database seeks to create the most comprehensive, complete record of waterfalls found throughout the world.

Angel Falls is the highest waterfall in the world with a jaw-dropping height of 3,212 ft. Located in an isolated jungle, Angel Falls is one of the top tourist attractions in Venezuela. It has two drops, and the tallest drop is at 2,648 ft.

Tugela Falls is the second-highest waterfall in the world. It is located in South Africa.
Tres Hermanas

Tres Hermanas is the Spanish way of saying ‘three sisters.’ This waterfall is the third highest in the world with a height of 3,000 ft. Waterfalls of the three sisters is in Peru, and has three drops, but the tallest drop is unknown.

World’s fourth tallest waterfall is Olo’upena Falls located in the north-eastern part of Hawaiian Island of Molokai. The waterfall has a height of 2,953 feet and an average width of 39 ft. The tallest drop of the falls is unknown.

The fifth tallest waterfall in the world, Yumbilla, is located in Amazonas, Peru. It has a height of 2,938 ft and an average width of 26 ft. Yumbilla falls has four drops and the stream is reported to come from a cave named ‘Caverna San Francisco.’

At 2,837 feet, Vinnufallet stands as the world’s sixth tallest waterfall, located in Norway. It is the tallest waterfall in the Eurasian continent. Vinnufallet has two drops and the highest drop is at 2,394 feet. There are several perplexities around its name- Vinnufossen or Vinnufjellfossen, while the locals call it Vinnu, and the first single drop is called Vinnufallet.

Located in Norway, Skorga is the eighth tallest waterfall in the world with a height of 2,835 feet. The fall has nine drops, but the height of the tallest drop is unknown. Skorga is also known as Skorgafossen.

The eighth tallest fall, Pu’uka’oku, has a height of 2,755 feet. It is located in Hawaii, United States.

Sharing the same height as Pu’uka’oku, Mattenbachfälle is also the eighth tallest fall with the height of 2,755 feet. It is located in Berne, Switzerland.

At 2,755 feet, James Bruce Falls is also the eight tallest waterfall. Located in British Columbia, Canada, the waterfall has two parallel rivers; one is perennial while the other dries up by July.

Here is a table representing the top 10 tallest waterfalls in the world.

*There are three waterfalls with the same height.

Know more about the top 10: