What does it mean to be a nation state? - Answers 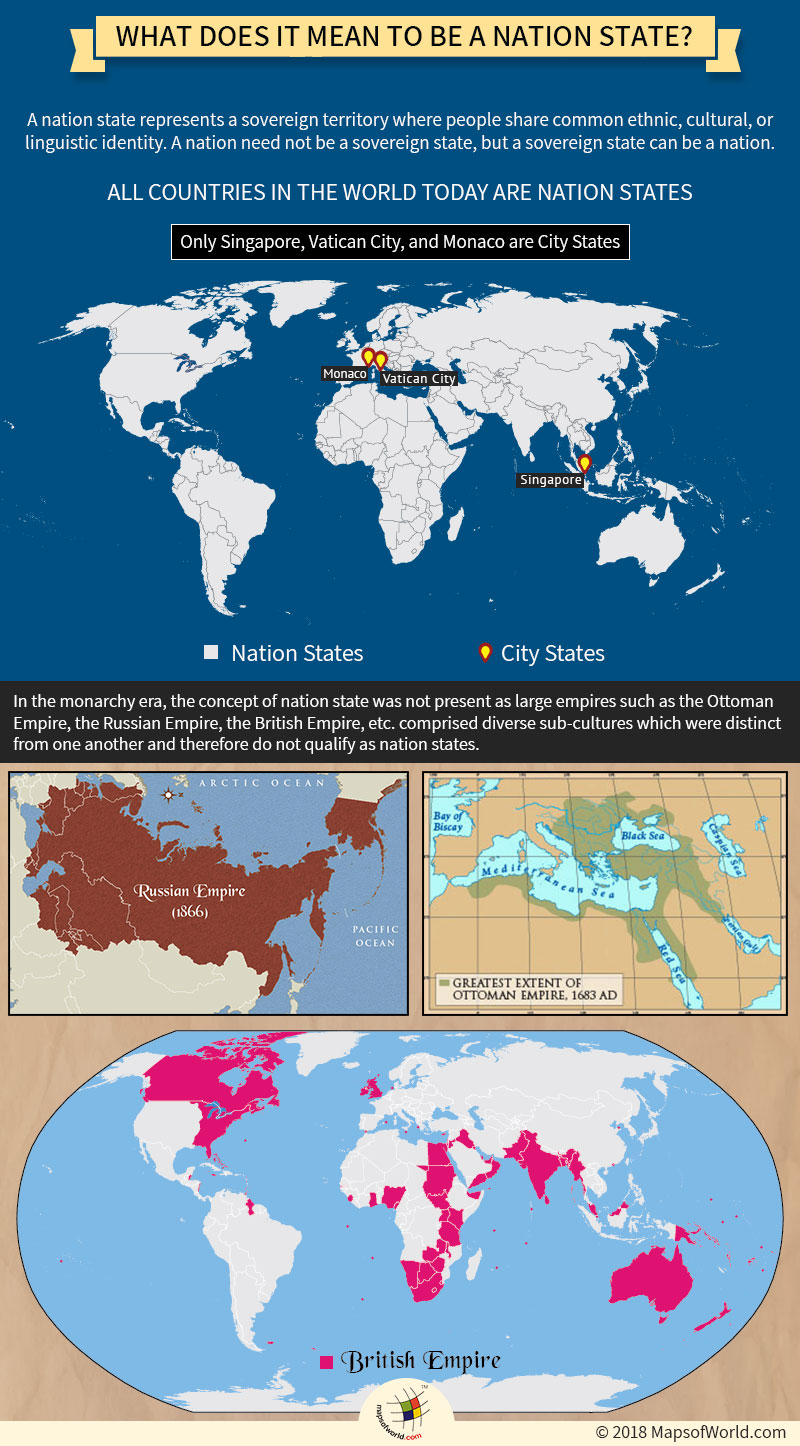 The concept of ‘nationalism’ refers to the common belief of national identity and binds a ‘nation’ to the ‘state.’ In some instances, it may be the cause of political strife within a country, where people of common identity assert themselves over other minorities over cultural, social or linguistic differences despite having a common heritage at a broader level.

The term ‘sovereignty’ in political theory is the right to govern a territory as a governmental entity. It represents the supreme authority and power to govern. A ‘sovereign’ state is a country with the defined physical territory, whose government has the political right and authority to regulate the state as established and granted by its constitution.

Vast empires such as the Ottoman Empire, the Russian Empire, the British Empire, The Kingdom of Hungary, and the Kingdom of France comprised of diverse sub-cultures which were distinct from one another and therefore did not qualify as nation-states.

In the post-monarchy era, the concept of nation-state became defined as a majority of cultures coming together to form a territorial or political identity. Japan is an example of a nation-state. The majority of its population share a common identity and heritage despite having a small minority of Chinese, Korean, Ryukyu, and Ainu minorities. China too is a nation-state with over 95 per cent of its people belonging to the ‘Han’ identity.

Germany qualifies as a nation-state. When Napoleon Bonaparte of France, who established the ‘Confederation of the Rhine,’ brought together people of common German heritage, the seeds of a German nation-state were planted. Later, the creation of the ‘Confederation of German States’ formed the basis for Germany to claim its distinct national identity, eventually giving rise to German nationalism.

In Greece, approximately 92% of citizens forming the ethnic Greek majority, is another example of a nation-state. Similarly, Egypt is a nation-state as over 97% of the population are ethnic Egyptians.

The United Kingdom represents an unusual example of a nation-state. It comprises of four nations – England, Scotland, Northern Ireland, and Wales, each having its distinct ethnic identity, yet all coming together to form the United Kingdom.

Over time, nation-states emerged more around linguistic and religious commonality than other socio-cultural factors. Iceland, for instance, comprises of people of Scandinavian descent but Icelanders have a very distinct language and national culture that is unique to that nation. Iceland qualifies as a nation-state.

India is a vast country where Hinduism has been a common factor for the majority of centuries. In the modern era, India represents diverse cultures and sub-cultures, along with people following various religions. Hinduism is the dominant religion. However, states were formed along linguistic lines. India could be referred to as a ‘Nation of states’ rather than a ‘nation-state.’

In Bangladesh, almost the entire population comprises of ethnic Bengalis. The nation which is formed on common religious and linguistic lines, ethnic heritage, would qualify Bangladesh as a nation-state.