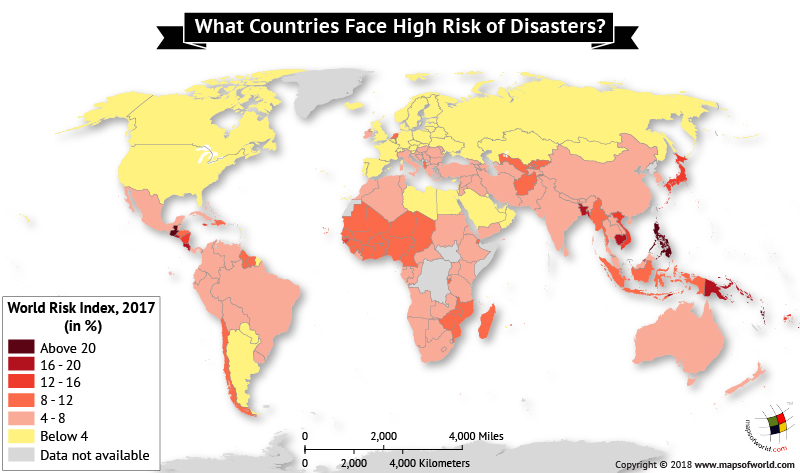 Natural disasters can have a devastating impact on nations in terms of both economic damages as well as loss of human life. Further, weak logistic chains and lack of critical infrastructure result in natural events becoming a disaster. In case of a disaster, it is imperative that humanitarian aid from within the nation and overseas reaches the affected people to lessen the loss of human lives.

Aid may be hindered due to unreliable electricity grids, crumbling transport routes and damaged buildings. As such it is imperative that, the governments invest in the establishment of critical infrastructure.

A well-maintained and high-quality infrastructure can prevent or lessen the disastrous consequences of storms or floods, and ensure a smooth flow of aid. Some nations have strengthened their infrastructure while others have not been able to do so and thus, they feature high on the World Risk Index of 2017. The 171 countries in the report are ranked according to their risk of becoming a victim due to natural hazards such as earthquakes, floods, cyclones, etc.

According to the 2017 World Risk Index, Vanuatu was the riskiest place to live. It had a world risk index score of 36.45 percent. Tonga was at the second spot, with a score of 28.57 percent, and the Philippines at the third place, with a risk index of 27.69 percent.

Nations such as Guatemala, Bangladesh, Costa Rica, Cambodia, and a few others were also prone to risk with risk factors ranging between 16-to-20 percent. Countries such as Pakistan, India, Peru, China, Malaysia, Thailand, eSwatini, Sri Lanka, Greece and many others had a risk index between 4-to-8 percent.

Croatia, Libya, the United States, Russia, the United Kingdom, Slovenia and several other countries had an index score of under 4 percent.

Meanwhile, according to the 2017 report, Qatar was the safest country in terms of natural disasters. Qatar occupied the safest tag and was placed at the 171 rank, with an index percentage of 0.09, because of its strategic location as well as high level of development. Malta was slightly behind Qatar with a rank of 170 and an index score of 0.61 percent.