What are the Top 20 Arms Producing Companies in the World by Sales? - Answers 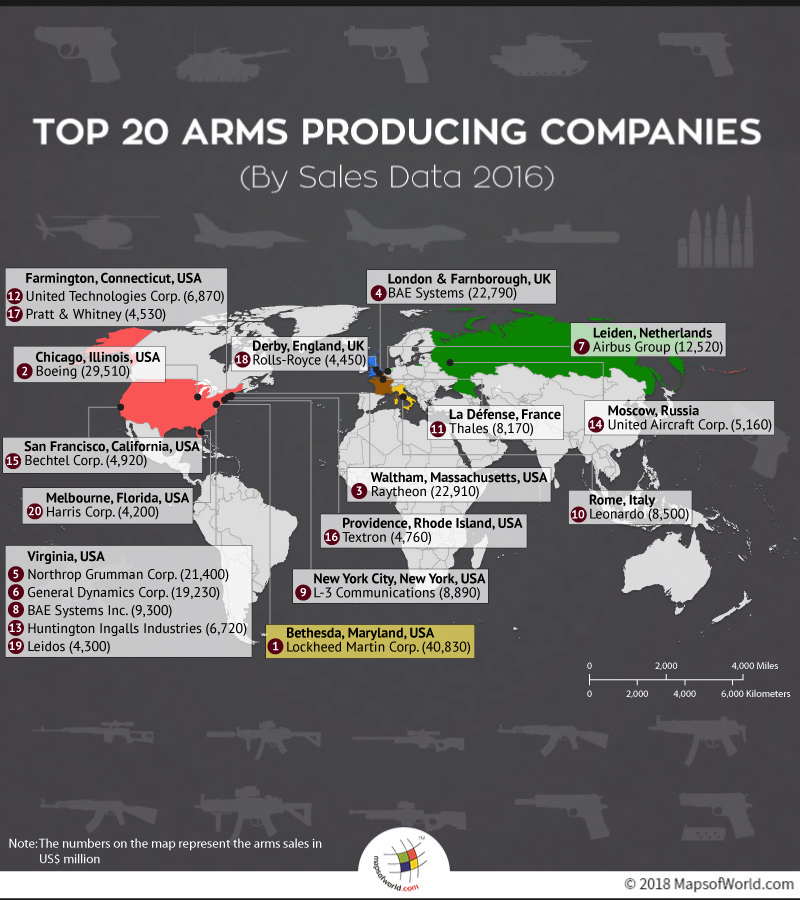 History has been witnessing to wars that incorporated the use of extensive weapons so that nations could exert their power. The world has seen conflicts and violent crimes for years, making the manufacture and sales of arms a major industry.

From the bombing of Pearl Harbor during World War II, to the recent air strikes in Syria, the world has observed immense devastation with the advancement in weapon technology. Even when a country is not participating in war, it looks to upgrading its weaponry and defense forces. However, when these weapons are used, it is the civilians who suffer the most.

Numerous government organizations have serious concerns regarding world peace. The Arms Trade Treaty (ATT) negotiated in New York City, became operative in December 2014, for the regulation of global trade in conventional weapons. With an aim to improve regional security and diminish human suffering, the treaty established common international standards to reduce the irresponsible arms transfers. For the prevention of war crimes, the guidelines of the international treaty, are strictly followed by all countries indulging in arms trading.

The SIPRI Arms Industry Database was introduced in 1989 to estimate the production and exports of arms by different companies around the world. Amid the top 20 companies, 14 are headquartered in the United States of America. According to the latest data released by the organization in 2016, Lockheed Martin Corporation is the leading arms producer in the world. The company, which is known for its highly advanced products and has recently introduced LM-100J ‘FireHerc’, a civil-certified firefighting air-tanker, witnessed a staggering USD 40,830 million arms sales in 2016.

Here is a list of top 20 arms producing companies that are supplying many nations around the world some of their best and jaw-dropping products.