What Countries have Won the Nobel Prize in Physiology or Medicine? 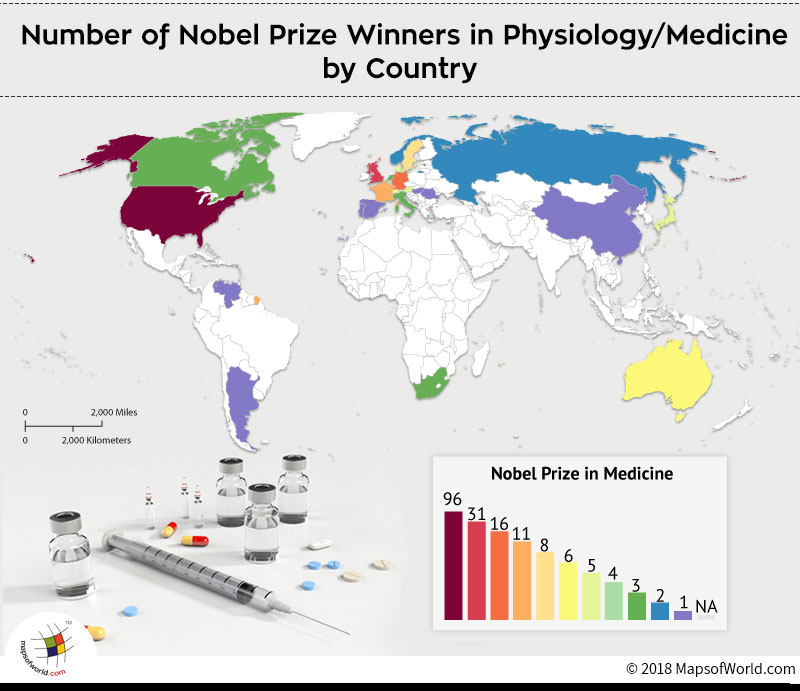 In 2018, two well-known immunologists have won Nobel Peace Prize in medicine for their unique and fresh approach for treatment of the deadly disease – Cancer. American James P Allison and Tasuku Honjo from Kyoto, Japan did research which helped in unleashing advancement in immunotherapy, bringing out knowledge on the significance of immune system when cancer occurs.

Life expectancies are increasing and mortality rates are declining around the world. The pharmaceutical industry through its innovation and development are improving the health sector. Over the years, the contribution of the medical industry has been tremendous. Now vaccines for polio, measles, H1N1 flu, influenza, cholera, are readily available in most countries, which earlier costed the lives of many people.

These medical achievements are worth treasuring and they are honored by the esteemed Nobel Prize.

The Nobel Prize is the top-award and was started by the will of Alfred Nobel, a Swedish chemist, engineer, and philanthropist, renowned for inventing dynamite. The award has been making a mark since 1901 when it was first awarded to Emil Adolf von Behring. Between 1901 and 2017, the prize has been awarded 108 times to 214 Nobel Laureates. In addition to medicine, the award is also given in the fields of chemistry, physics, economics, literature, and peace.

Nobel Assembly at Karolinska Institutet in Stockholm awards the prize in an annual event on December 10th, that marks the death anniversary of Alfred Nobel. Following is the list of all the Nobel Prize winners, with the countries to which they were affiliated when they received the award.