Explore the map of North America, the third largest by area and the fourth most populated continent in the world. It comprises the North American peninsula, Central America, and the Caribbean. It is located in the northern hemisphere between the Pacific Ocean and the Atlantic Ocean and is home to some major global economies like the United States and Canada. 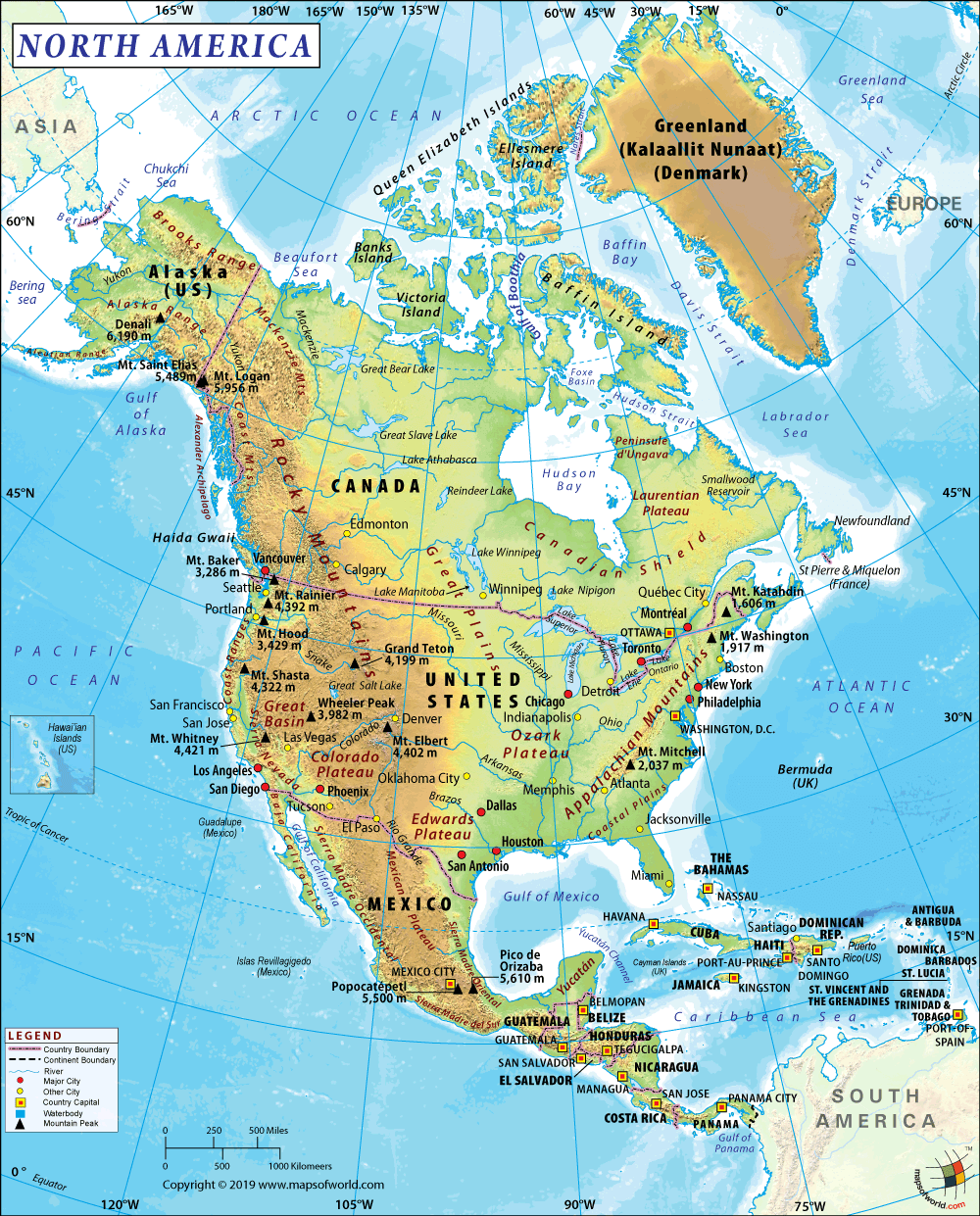 Get North America Map showing flags of all the 23 independent countries. The Flag thumbs on map are clickable to flag pages of respective countries

Anthropologists believe that early inhabitants arrived in North America between 25,000 to 11,000 years ago, with the first ones being Paleo-Indians. They possibly migrated through the Bering Land Bridge, using primitive boats. These people proliferated and created diverse communities across the continent. Much before the European exploration, the continent witnessed cultural advances with Aztecs emerging as one of the most advanced pre-Columbian civilizations. Mayan civilization in Central America developed a written language, built pyramids and made progress in mathematics. .The Mayan culture was present in Mexico and Guatemala till the time the Spanish explorers arrived in 1500.

It was the Age of Discovery, when Europeans began “exploring and staking claims” in several parts of North America. The native population dwindled owing to the violent conflicts and introduction of European diseases. After Britain, Spain, and France had fought against each other and established their presence in North America, several independence movements started across the continent in the late 18th century, leading to the creation of the modern countries.

The 13 British colonies on the North Atlantic Coast were declared independent in 1776, and they declared themselves as the United States of America. The northern territories controlled by Britain and France were unified to form Canada. New Spain (from modern-day southern US to Central America) became the first Mexican empire after its independence in 1810.

North America is broadly divided into four great regions: the Great Plains stretching from the Gulf of Mexico to the Canadian Arctic, the Rocky Mountains, the Great Basin and Alaska in the west, and the plateau of the Canadian Shield in the northeast. The eastern region of the continent comprises the Appalachian Mountains, the Florida peninsula, and the coastal plain.

The Great Plains and the Mississippi River System are among the most interesting geographical features of North America. Except for a few hills, the Great Plains is generally a large swathe of treeless areas and shallow river valleys. Mississippi, stretching for 2,340 miles is the most important river in North America. It combines with its tributaries – Missouri and Ohio rivers – to become the third largest river system in the world, with a length of 3,875 miles.

Geology
Biodiversity
The richness of biodiversity in Canada and the USA is directly linked to their diverse landscape and large areas. While continental US and Canada are known for their vascular plants and temperate forests, Hawaii is home to more than 1,800 species of flowering plants. Laurel forests, which are temperate evergreen cloud forests, could be seen in large swathes in the southernmost point of North America. More than 430 species of mammals are endemic to the continental U.S. White-tailed deer, American mink, American beaver, striped skunk, and red fox add diversity to the fauna of North America. Gray wolf, brown bear, caribou, wolverine, and the musk ox are synonymous with Canada.

The red-tailed hawk is seen often in the entire continent. Apart from cougars, Jaguars, and spider monkeys, the red brocket (deer) is also found in tropical forests – making the continent's fauna exclusive.

Climate
Greenland is the coldest region in the entire continent. The average temperatures hardly exceed 50° F even during the peak of summer. Canada is known for harsh winters owing to its continental climate. Coastal regions, including British Columbia, have a temperate climate with mild winters and warm summers with average temperature ranging from 77 to 86° F.

Different climatic zones exist in the USA. While south Florida and Hawaii have a tropical climate, the Great Plains witness semi-arid climate. The Mediterranean climate in coastal California is in sharp contrast to the sub-Arctic climate of Alaska. North Mexico has a dry climate, unlike the tropical lowlands of the southern part of the country – which witnesses an average rainfall of more than 2,000 mm. The capital city of Mexico remains pleasant throughout the year with the difference between mean summer and winter temperatures being approximately 11 to 14 °F.

Demography
The United States is the most populous country in North America with a total population of 322,179,605 (2016). Mexico comes a distant second with a population of 127,540,423 (2016). Canada is the third largest country with a population of 36,289,822 (2016). North America is also home to the biggest island, Greenland, which also has the world's lowest population density. Some of the Caribbean island-nations such as Cuba, Dominican Republic, Jamaica, Trinidad and Tobago have large cities with populations greater than one million.

English, Spanish, and French are the dominant languages of the continent. In Canada, English and French are considered co-official languages. In fact, places such as Ontario, Manitoba, and the US state of Louisiana have a significant French-speaking population. Mexican is widely spoken in the southern part of the USA. Greenland has a significant Danish-speaking population and Dutch is spoken in some of the Caribbean nations.

A large chunk of North America’s population is found in the U.S.A., Mexico, and Canada, and Christianity is the dominant religion in these countries. Followers of Hinduism, Buddhism, and Sikhism have also made inroads into this continent.

Like the US, Mexico has a congressional system of government wherein the President is the head of state and head of government. Politics of Canada stands out as it is considered a constitutional monarchy which means the Monarch is the head of the state. The country has a multi-party system and follows the principles of parliamentary democracy.

Railways
North America has an extensive railway network. The United States, Canada, and Mexico have an interconnected rail system. Freight-oriented railways in Mexico have a railroad network that connects the US. Panama Canal Railway, connecting the Atlantic Ocean with the Pacific Ocean. The railway line runs parallel to the Panama Canal. Guatemala runs occasional chartered tourist trains across the country. Cuba's railway system is the only one in the Caribbean islands. It provides both passenger and freight services within the country.

Roadways
Pan-American Highway is a network of roads totaling a length of about 30,000 miles. It links almost all the mainland nations. This is considered the world's longest "motorable road." The U.S.A. has the world's largest road network with 4 million miles of roadways including interstate highways and U.S. Highways.

The Trans-Canada Highway is the lifeline of Canada. In fact, Canada and the U.S.A. have built the Alaska Highway that connects Anchorage (Alaska) to Canada and the rest of the United States. Mexico also has a large road network of 201,310 miles. The Inter-American Highway, which is a section of Pan-American Highway in Central America, runs for 3,400 miles between Nuevo Laredo (Mexico), and Panama City (Panama).

Waterways
Like Alaska, several North American islands are not linked to the continental road network and are served by ferries or private boats. West Indies, Vancouver Island, and Newfoundland (island) are some of the examples. Alaska's state-owned ferry system (Alaska Marine Highway) serves the local transportation purpose. The same system operates a ferry service from Bellingham (Washington) to British Columbia in Canada. The rail ferry service between Alaska and British Columbia is one of the few such services in the entire world. Panama operates one of the busiest waterways in the world – the Panama Canal. It connects the Atlantic and Pacific Oceans.

The North America Free Trade Agreement (NAFTA) is one of the largest trade blocs in the world with its member nations – USA, Canada, and Mexico – establishing strong economic cooperation to eliminate trade barriers. The Caribbean trade bloc, CARICOM (Caribbean Community), is one of the earliest entities formed on July 4, 1973 with an objective of promoting economic integration among the 15 Caribbean nations.

Food
Cuisine in North America is as varied as its topography. While Caribou stew, smoked salmon, roast beef with Yorkshire pudding, and Montreal-style smoked meat are a craze in Canada, the US swears by its hamburgers, pies, and hot dogs. Rice and fish is the staple food of the Caribbean. Flying fish, lobster, crab soup, turtle stew, and meat pies are common in almost every island in the region. Coconut is a dominant ingredient in the curries. In fact, the cuisine of Southeastern Mexico also has a Caribbean influence. Seafood is more popular in regions close to the Pacific Ocean or the Gulf of Mexico. Cuban dishes are mostly sautéed or slow-cooked. Sofrito, which is widely used for seasoning, adds a distinctive flavor to the native cuisine. Stews, meat dishes, and tomato-based sauces are quite a hit among the locals.

Music
From Mexican Mariachi to American Rock & Roll, North America is known for introducing several genres of music to the world. Cuban music is inspired by various musical styles like salsa, mambo, and the cha-cha-cha. Popular Cuban music has strong African and European influences. The evolution of Caribbean music is largely attributed to the descendants of African slaves. Calypso and reggae are some of the genres that got worldwide popularity. Celine Dion and Shania Twain are the names that continue to bring the focus back to Canadian music.

Art & Sculpture
The Afro-American and European sculptors, who migrated to the US, revived the classical tradition and gave prominence to the idea of American Expressionism. After artists such as Jackson Pollock showed interest in Native American art, several American artists followed suit and began to recreate their traditional art. They also gave birth to a new art, blending European and Native American ideas. Cuba has a long tradition when it comes to visual arts. The country has witnessed a steady transition from pre-revolution modernist masterpieces to contemporary paintings and sculptures.

The mural paintings of Mexico is revered by art lovers all over the world. The immediate impact of the Mexican Revolution (1910 to 1920) on Mexican art was 'dramatic', to say the least. Apart from murals, paintings with nationalistic and political messages were created on public buildings, and they had established a tradition in other parts of the Americas.

Design & Architecture
The US is distinctly known for its ability to create the tallest and the swankiest buildings of the world. In Mexico, it is common to find colonial architecture with traces of Baroque style. The Meso-American architecture is noted for its pyramidal structures. The colorful colonial buildings on the streets of Cuba are among the most photographed architecture. Besides, the country includes an assortment of styles and influences for creating a uniquely Cuban-style of architecture.

Literature
American literature has wowed the world with its dedicated practitioners dishing out thought-provoking ideas through novels, verses, essays, and plays. The world vividly remembers names such as T. S. Eliot, Robert Frost, and Ezra Pound. Modern playwrights such as Tennessee Williams & Arthur Miller and novelists such as Toni Morrison, Virginia Woolf,William Faulkner & Ernest Hemingway are amongst the doyens of American literature. Mexican literature is also known for its prolific patrons and globally recognized authors. Cuban literature has received a belated recognition. Its themes of freedom and independence got prominence not before the advent of the 19th century.

Cinema
Hollywood, or the American movie industry, is perhaps the most popular across the world. It is closely intertwined with the Canadian cinema which finds a respectable position in the world cinema.

The Golden Age of Mexican cinema (1936 and 1969) has left the movie buffs with much to relish. Salma Hayek is another name that is inherently linked to Mexican and world cinema. Movies such as 'I Am Cuba' (1964) and 'The Last Supper' (1976) brought limelight on Cuban cinema. In fact, the 'Imperfect Cinema' of Cuba has been widely acknowledged as very thought-provoking and ingenious works of art.