What countries are part of OPEC? - Answers 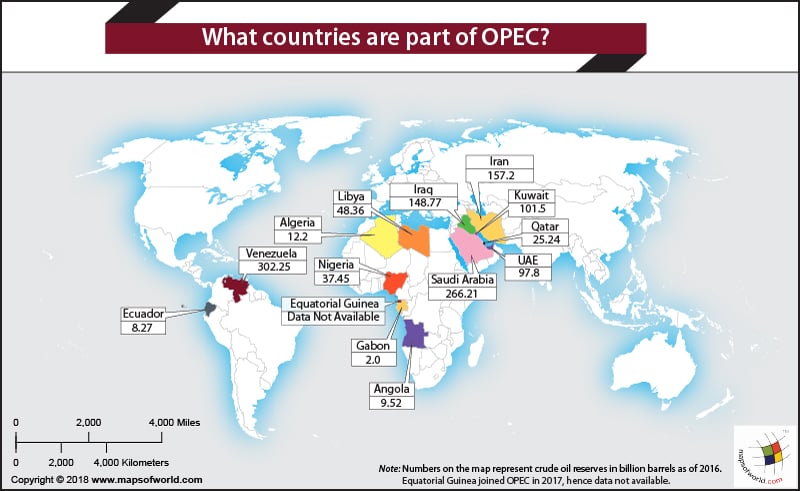 The Organization of the Petroleum Exporting Countries, which is more commonly known by the abbreviation of OPEC, is an international cartel comprising 14 countries which contribute significantly to the world’s oil production. According to the 2016 estimate, these 14 nations collectively account for around 44 percent of the oil production in the world. They also account for a whopping 73 percent of the proven oil reserves in the world.

The history of the organization dates back to 1960 when 5 nations that were rich in oil reserves – Venezuela, Kuwait, Iraq, Saudi Arabia, and Iraq – got together and founded OPEC in the Iraqi capital of Baghdad. By 1965, OPEC had established its headquarters in Vienna, Austria. The following years the organization witnessed a growth in its influence as new nations with large reserves of oil joined it. As of 2016, the 14 nations that comprise OPEC are from Africa, South America, and the Middle East. These 14 nations are; Algeria, Angola, Ecuador, Equatorial Guinea, Gabon, Iran, Iraq, Kuwait, Libya, Nigeria, Qatar, Saudi Arabia, United Arab Emirates and Venezuela. However, the membership of the organization is open to all, provided the required criteria is met.

Over these years members have joined the organization and left, only to rejoin again. As of 2018, Indonesia is not a member of the OPEC. The nation was an OPEC member from 1962 through 2008, and again from January to November 2016. Similarly, Sudan has already submitted its application to join the group; however, as of now, it is not a member.

Aim of the Organization

The organization aims to ensure that prices in the global oil market remain stable, they also ensure that the oil-producing nations get a stable revenue and consuming countries get an efficient, regular, and reliable economic supply. As oil forms the lifeline of the global economy, OPEC is playing a very influential and significant role in global affairs. In 1973-74, OPEC imposed an oil embargo on the US and industrialized countries. This was in response to their support for Israel in the Yom Kippur War. The embargo had a significant impact on the United States.

Below is the list of crude oil reserves by country for the year 2016. Equatorial Guinea is not on the list as it joined the organization in 2017: