Explore map of Paris, it is situated on the Seine River in the north of the country and it is the capital and most populous city of France. Paris has an area of 40.7 square miles (105.4 square kilometres) and a population of 2.24 million. Known as most populous urban area in the European Union. 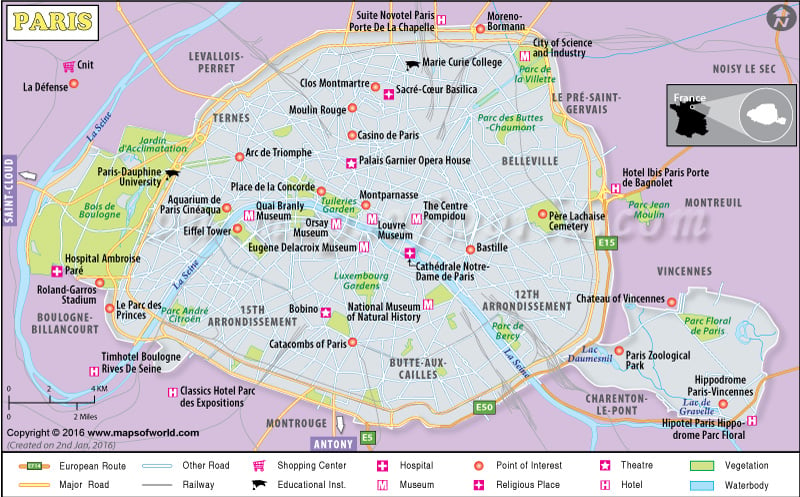 Home to over 3800 historic monuments and three UNESCO World Heritage Sites, it comes as no surprise that Paris, the capital city of France is the most visited city in the world.

Undoubtedly one of the most sophisticated and beautiful cities, Paris is also known as a chic fashion hub. The romance capital of the world is also a lively city and a center for art, culture, and haute couture. Despite being one of Europe’s most populous metropolises, Paris is perhaps one of the cleanest and greenest cities on the continent. It’s also a leading center for international politics and higher education in Europe, with more than 17 universities and about 55 grandes ecoles. Aside from the students and artists, the city is a favorite destination for honeymooners, families, and tourists with an active interest in history and culture.

How to reach Paris?

Trains are an efficient way to get around to with the TGV (Trains à Grande Vitesse) French high-speed trains providing a rapid and regular service.

From the airports, train and bus stations, local trains and buses offer easy access to the city. Within Paris, a well-interlinked system of public transportation consisting of the metro with 16 lines, buses, and trains provide convenient interlinks throughout the city.

Though not on the coast Paris has a maritime climate and experiences warm summers and cool winters. Paris experiences light showers through the year, and occasional snowfall in deep winter.

Spring and fall experience rainfall and cooler weather, while the summer months are pleasant and warm with temperatures ranging around 73-77 degrees F.

Which is the best season to visit Paris?

The summer months (May to July) are the best time to visit Paris as the weather is pleasantly warm and days are longer, so you can make the best of the cool evenings to see the sights of the city and enjoy its vibrant nightlife.

A City by the Seine

The origins of Paris date back to around 250 BC. The Gauls, tribesmen of the Parisii tribe, founded the city as a small fishing hamlet on an island in the Seine River, known as Ille de la Cité.

The city came to be known as Paris after the Parisii tribesmen who settled there. Paris grew in population and size over the following two centuries. By about 52 BC, Roman Emperor Julius Caesar had conquered Paris and renamed the city Lutetia (or Lutee). Through the early Middle Ages, Paris was known by the name given by Caesar.

Paris was dominated by the Franks and the Vikings until around 987 AD, When Hugh Capet, the Count of Paris, declared himself King of France. Hugh Capet’s descendants, the monarchs of France, made Paris the administrative center of the nation, and ruled from the city as the capital. Through the 15th and early 16th centuries, Paris fell into decline under the impact of the plagues, the Hundred Years’ War, and political neglect. By 1635, the Fronde, a civil unrest, broke out in France and the court was moved to Versailles. Parisians took the lead in storming the Bastille in 1789, during the French Revolution. By 1792, the monarchy had been overthrown. Between 1814 and 1830, Paris was occupied by the Russian and Allied armies following Napoleon’s defeat. The city played a prominent role in an 1830 uprising and again in 1848, when the Second Republic was formed.

Throughout the later part of the 19th century, Paris was rebuilt, giving it the elegance for which the city is now known. The Industrial Revolution ushered in a period of progress and prosperity. Though the Germans were unsuccessful in occupying Paris during World War I, they succeeded in World War II, occupying the city from 1940 through 1944. Over the years, Paris has become a chic fashion capital, and a center for culture and the arts, media, and modern thought.

Spring (April through June) and fall (September through November) are the best seasons to visit Paris. Though most tourists prefer summer months, July and August can be crowded in Paris. Winter months are great for business travelers and exhibitors, as Paris hosts many trade fairs and exhibitions. Christmas in Paris is nothing short of magical. Tennis fans should plan to visit in May, when the French Open is hosted a Paris’s Ronald Garros. The salon du Chocolat and other food festivals gear up for September and October.

Transportation There and Around

Within the city, the Metro is the easiest mode of transportation, as well as the preferred. With over 300 stations and 16 lines, the Paris Metro network extends over 133 miles. Aside from the Metro, the Tramway network of four rail lines is a boost to suburban commuters. The Vougeo, a ferry on the Seine, is popular amongst tourists, and the Compagnie de Batobus ferries offer hop-on-hop-off service. Taxicabs and bikes are also readily available – find the latter for rent at any of the 1,450 parking stations around the city.

Dominating the landscape, the city’s tallest structure, the Eiffel Tower, will surely top any visitor’s list of places to see. Ride up the 300 meter (feet) lattice structure in an elevator – or try the stairs. Head over to Avvene des Champs Elysees for some upscale shopping. Home to some of the best Parisian mansions, Champs Elysees is also the most expensive real estate market in the country.

Consecrated in 1248, La Sainte-Chapelle is a magnificent work of Gothic architecture, and a highly recommended stop on your itinerary. The Holy Chapel, commissioned by Louis IX, is ethereal as the sun’s rays filter through the stained glass windows. Look out for the arched ceilings and the breathtaking sculptures.

When in Paris, remember to pay Mona Lisa a visit. Musée du Louvre, one of the world’s largest art museums, is located in the Palais du Louvre. With a collection of over 3,500 objects d’art, this museum alone can take several days to explore. Don’t miss the display of Louis XV’s crown jewels. Speaking of museums, the Musée d’Orsay, located on the left bank of the Seine, is another astounding museum, housing a collection of Post-Impressionist artwork. The Musée Jacquemart-André was designed by architect Henri Parent, and displays collections from artists such as Édouard André and Nélie Jacquemart. The Musée Jacquemart-André is a public museum and one of the noted attractions of Paris. Musée Rodin not only displays the personal effects of Auguste Rodin, but also displays the master’s own collection of sculptures, including The Thinker, The Gates of Hell, and The Kiss. Opened to the public in 1919, the exhibit includes paintings from Renoir, Monet, and Van Gogh, collected by Rodin.

If you were to ask a Parisian his favorite attraction and expect to hear the Eiffel Tower, you may be in for a surprise. The French are more likely to name Notre Dame Cathedral, which records over 10 million annual visitors. Aside from a beautiful French Gothic work of architecture, the cathedral is known for its serene aura.

Most who have visited Paris would say it requires a lifetime to fully explore, but even a quick trip to the city is incomplete without having admired Jardin du Luxembourg, the gardens of the French Senate on Rue de Vangurard. Aside from being the second largest public park in Paris, the garden is also a great spot for a picnic. The largest park in Paris is Tuileries Gardens. The Puces de St-Ouen is the world’s largest flea market, and well worth a visit. Open from 9 AM to 3 PM, Saturda through Monday, this is the best place to find inexpensive bric-a-brac and unique antique showpieces.

Things to do in Paris

Not for nothing is Paris called the city of romance. Romance or not – you will never spend a dull moment, given the number of entertainment options around town. A trip to the original Moulin Rouge usually makes it into the itinerary. The 105 minute long “Feerie” is the most popular show, but if you plan to check it out, be sure to book in advance as shows do sell out.

What is a trip to the city of romance without a river cruise down the Seine? Make the journey on a sailing restaurant boat and enjoy a delectable three course French dinner and champagne while observing the attractions of Paris along the Seine. Speaking of dinner, don’t forget to reserve your table at the Eiffel Tower Restaurant well in advance. Located on the first floor of the monument, the views while you dine are incredible.

A visit to the Arc de Triomphe in the Palace Charles de Gaulle is an important stop on the itinerary, as is a day trip to Versailles.

Another must-do activity in Paris is experiencing some of the best Parisian bakeries, or boulangeire, as the French would say. Sample the baguettes on your own or take a half-day tour of the best bakeries in the city, so you can interact with the bakers and learn some tips on baking the perfect gateaux, croissants, or patisseries.

Other activity ideas to consider are the all-night jazz fests or a day at Disneyland Paris.

Cuisine Française and Other Delights

French cuisine is celebrated the world over, and French wines are known to be some of the best. Wining and dining also has a great sociocultural significance in Paris, so make sure to do it right.