Where is Yellow River and Yellow Sea 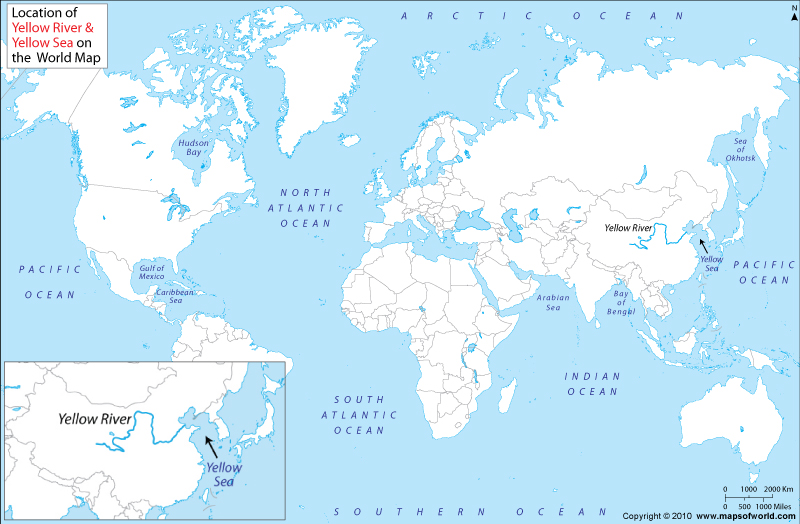 Description: The Map displays the location of Yellow River and Yellow Sea.
1FacebookTwitterPinterestEmail

The Yellow Sea on the World Map

The Yellow Sea Map illustrates its location on the world map; however, for better clarity map of the Yellow sea has been shown in satellite view. The yellow sea is a marginal part of the Pacific Ocean and is located between the mainland of China and the Korean Peninsula. In the south of the Yellow Sea East China Sea lies and in the northern side Bohai Sea and Korea Bay lie.

The name of the yellow sea is quite meaningful; it is named Yellow because of the Yellow River (Huang Ho) and storms carry yellow sand particles from the Gobi desert to this water region hence the color of the water changed to golden yellow. Besides, the Yellow sea is also known as Hwang Hai.

With an area of 380,000 sq km, the Yellow sea extends about 960 km from north to south and about 700 km from east to west. The average depth of the Yellow sea is merely 44 meters but at maximum, it measures about 152 meters below sea level. Some of the important islands in the Yellow sea are – Anmado, Baengnyeong, Deokjeokdo, Wando, Jeju-do, Muuido, etc.

Yellow River on the World Map

Hwang Ho or Huang He, more commonly known as the Yellow River is the second largest river in China after the Yangtze River. With a length of 5,464 km, it flows through nine provinces of China before debouching into the Bohai Sea. On the Yellow River map, you can clearly visualize the course of this river from the origination point i.e. Bayan Har Mountains to the ending point i.e. the Bohai Sea.

Historically, the Yellow river is very important and more popularly known as the cradle of Chinese civilization. The reason behind this is – the archaic Chinese civilization had flourished at the bank of the Yellow River. On the contrary, with the passage of time same river was more famed with the name China’s Sorrow and Scourge of the Sons of Han because of frequent flooding phenomena. Moreover, the Yellow river is notable because of the large amount of silt that it carries every year from the Loess Plateau.