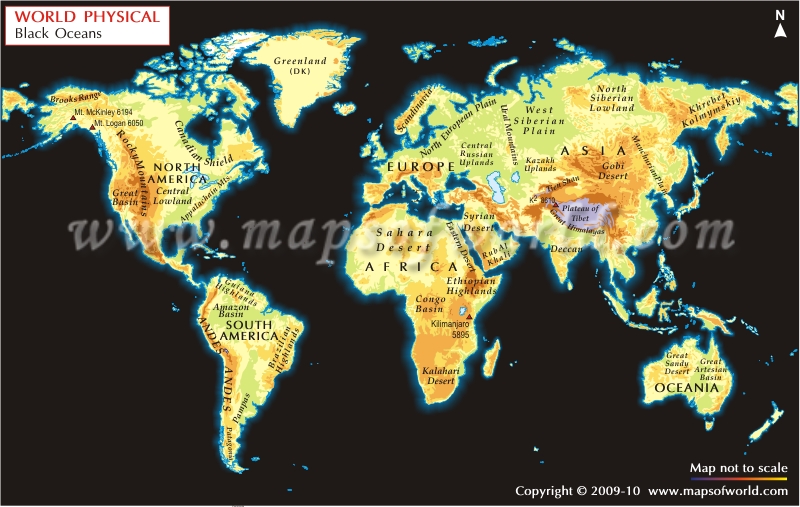 Physical Maps of the World

Physical maps of the world, depict the physical features of its continents and geographical regions by means of colours, gradients and shades. Physical maps show the mountains, rivers, lakes and other bodies of water, deserts, and landforms in a region. Physical maps can also show the types of soil or the built infrastructure of a region, such as roads, railway lines, and buildings. Physical maps, however, do not usually depict territorial boundaries as these are shown on political maps.

Asia is the largest and the most populated continent in the world. It covers 8.7% of the surface area of the Earth and has a variety of landforms including mountain ranges such as the Himalayas (which include the world's highest mountain, Mt. Everest), the Kunlun, the Tienshan, the Karakoram, the Hindukush, the Zagros and the Altai; large deserts such as the Gobi, Takla Makan, Arabian, Kara Kum, Kyzyl Kum and Thar; and mighty river systems such as the Indus, Ganges, Yangtze, Hwang Ho, Mekong, and Irawaddy. The Ural Mountains in the west mark the physical boundary between Asia and Europe.

Europe consists of the western peninsular region of the Eurasian landmass. It covers 2% of the Earth's surface and is the sixth-largest continent in the world. Europe has mountainous regions such as the Caucasus (which include Europe's highest mountain, Mt. Elbrus), the Alps (which include Western Europe's highest mountain, Mt. Blanc), the Carpathian mountains, the Jura Mountains and the Pyrenees; while the central part of Europe consists of the North German Plain and the Great European Plain. In the north there are numerous fjords along the Norwegian coast. Major rivers in Europe include the Volga, Danube, Ural, Rhine, Rhone, Loire, and Thames. Europe is separated from Asia by the Caucasus Mountains and the bodies of water the Black Sea and the Caspian Sea, as well as separated from Africa by the Mediterranean Sea.

North America is located entirely within the northern hemisphere and almost entirely within the western hemisphere. It is the third-largest continent in the world and covers around 4.8% of the Earth's surface. North America consists of four distinct geographical regions: the Great Plains which extend from the northern Canadian Arctic region south to the Gulf of Mexico; the mountainous zone which includes the Rocky Mountains and Alaska (where Mt. Denali, the highest peak in North America can be seen); the Canadian Shield, which is a large plateau region; and the Eastern region which consists of the Appalachian Mountains, the Atlantic coastal plain, and the Florida peninsula. Major rivers in North America include the Mississippi, Missouri, Colorado, Mackenzie, Rio Grande, and Yukon. The Great Lakes region, where Lakes Superior, Michigan, Huron, Erie, and Ontario form a unique ecosystem, is another area of geographical interest. North America is connected to South America by the Isthmus of Panama.

South America is located entirely within the western hemisphere and is the fourth-largest continent in the world. It has distinct geographical regions, such as the Andes Mountains which run along its western coast (this is the longest mountain range in the world and its highest peak is Mt. Aconcagua); the Amazon Basin, which is an area of tropical rainforest along the Amazon river; the Atacama cold desert region; and the grasslands (llanos and pampas), which stretch across the plains. The Amazon river is the second-longest river in the world and the largest in terms of volume of water. Lake Titicaca, which is the highest navigable lake in the world, is another unique cosystem in South America.

Australia is the largest island in the continent of Oceania, which is the world's smallest continent. (Oceania consists of the islands of Papua New Guinea, Australia, New Zealand, the Polynesian and Melanesian islands, and many more volcanic outcrops and coral atolls in the Pacific Ocean.) Australia is the world's sixth largest country and includes Australia, Tasmania and several smaller islands. Australia is often called the world's largest island or island continent. Australia has distinct geographical regions which include the mountain ranges: the Flinders Ranges (the largest mountain chain in Australia), the Great Dividing Range along the east coast (Mt. Kosciuszko, the highest peak in the country can be seen here), and the Darling Range. The Murray-Darling basin is a significant agricultural area in Australia, and the Nullabor Plain is an arid limestone flatland that extends over 1,100 km. The dry interior regions of Australia include the Great Sandy Desert and Great Victoria Desert. The Great Barrier Reef, a unique ecosystem of coral reefs along the east coast of Australia is the only living structure that can be seen from space.

Africa is the second-largest continent in the world and second-most populated after Asia. The geographical regions in Africa include the deserts such as the Sahara Desert (the largest desert in the world) the Kalahari, and Namib deserts; the highlands such as the Atlas Mountains, the Ethiopian Highlands, and the Drakensberg; the tropical rainforest region of central Africa, the savannah grasslands of central and south-eastern Africa, and the Rift Valley region, where several lakes form unique ecosystems. The Nile river, the longest river in the world, is one of the greatest rivers of Africa. Others include the Congo, the Zambezi, and the Orange. Some other unique ecosystems in Africa are: the Okavango Delta, a marshy ecosystem in south-western Africa; Mt. Kilimanjaro, an extinct volcano, which is the highest peak in Africa; and the island of Madagascar, a biodiversity hotspot, off the south-eastern coast of Africa.

Antarctica is the southern-most continent in the world and contains the geographic south pole. Located in the southern hemisphere, it is almost entirely within the Antarctic circle. It covers 8.9% of the Earth's land area, and around 98% of its surface is covered in ice that is approximately 1.6 kms thick. Antarctica has mountainous regions such as the Ellesworth Mountains (where the Vinson Massif, the highest mountain in Antarctica, can be seen) and the Transantarctic Mountains which stretch across the continent. Antarctica is also considered the windiest and coldest place on Earth.