Religions of the World

World Religion map provides information about the majority religion followed in populations around the world. 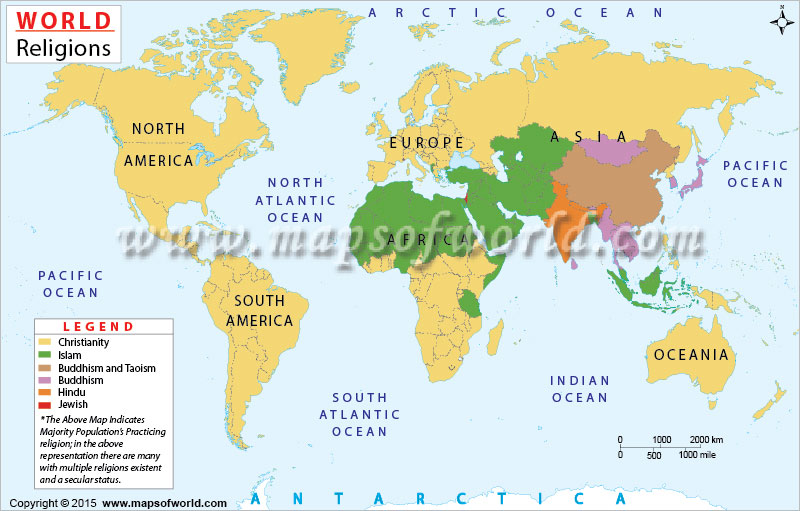 
The World Religion Map shows the distribution of the world major religions. Because showing every religion practiced around the world is very difficult, the map shows instead the dominant religion in each country.

It is worth noting that while many countries have a national religion, many do not and some nations have a majority population made up of nonreligious people. Further, there are many areas where a multitude of religions exist together, including traditional religions that continue to exist among small tribes. For the purposes of this map, the information shows the most common religion practiced in each country. Many nations have adherents to a wide variety of religions and are secular states.

Countries in which forms of Christianity dominate are depicted in yellow on the world map, which include many Western nations, like those in the Americas, much of Europe as well as Australia. This category includes Catholicism, which is the religion with the largest number of followers worldwide, as well as many Protestant denominations.

Green represents countries with a majority population who are followers of Islam, called Muslims. The Muslim nations are primarily Arabic countries, as well as others in Africa and Southeast Asia.

China is brown on the map, representing Taoism and Buddhism, which are the dominant religions there. Buddhism alone, shown in purple, dominates Sri Lanka, Mongolia, and other areas in Asia. India, which is a multicultural and sovereign republic, is shown in orange to represent the large Hindu population, but many other religions are also practiced. Judaism is shown (in red) as the dominant religion in Israel.

The world's major religions may be roughly classified as follows: