Where is USA Located? 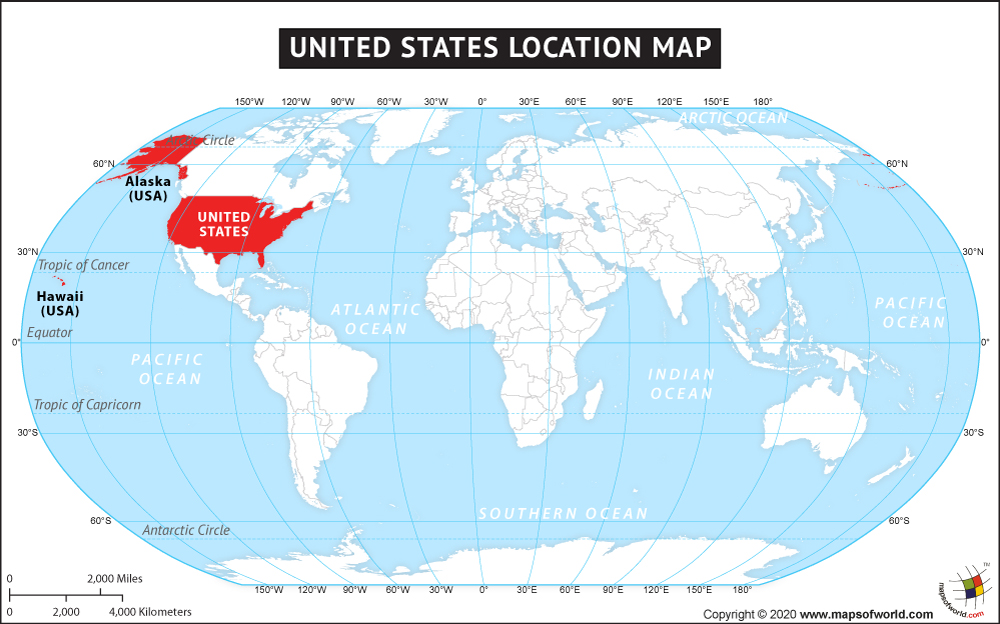 
Where Is The United States Of America Located?

The third largest country in the world, the United States of America is located in North America between Mexico, to its south, and Canada, to its north.

The US is divided into fifty states, and one federal district. Washington D.C., is the capital city (Washington DC Map). The states of Alaska and Hawaii, are the only two states not sharing a contiguous boundary with the country. Alaska is situated to the northwest corner of North America, sharing its border with the with Canada, and Hawaii Island is an archipelago in the Pacific Ocean. The US also has many territories in the Pacific Ocean and the Caribbean Sea. One of the most developed countries of the world, the US covers a total area of 3,794,100 square miles (9,826,675 sq. km), including states and the federal district, and not any overseas territories.


The US has a longer coastline than it has a land boundary. The total coastlines measure over 1,200 miles long whereas its land boundary is less than 1,000 miles (12,034 km) long. The geographic coordinates of USA are 38 00N and 97 00W. The climate in USA is predominantly temperate barring Alaska, which has Arctic climate, and Hawaii’s tropical. The topography of the country ranges from Plains, hills, and mountains, to plateaus and desert regions.

USA is a multicultural country, as it has historically welcomed immigrants for all over the world. It also has rich reserve of natural resources and biodiversity. To top it off, the US is one of the most preferred destination for tourists from worldwide.

To learn more, visit our United States Of America section.