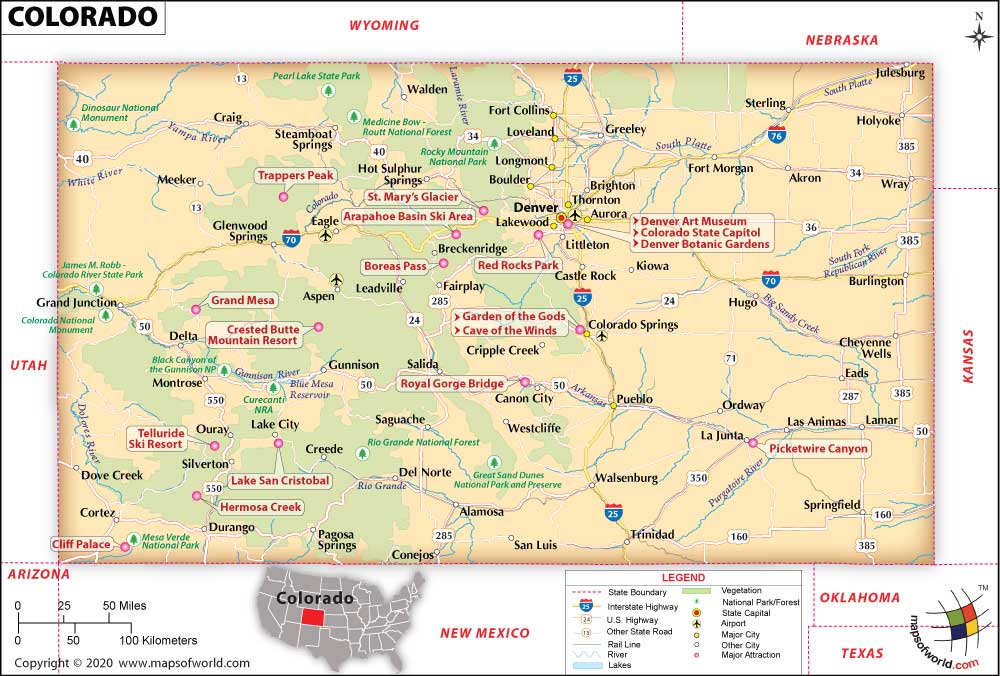 Colorado reminds us of blue spruce, alpine scenery, steam train and of course, Colorado Springs. This Centennial State is full of wonders awaiting a passionate look. Encompassing total area of 269,595 square kilometers, Colorado is divided into 64 counties which is also depicted in the Colorado Map. It is the 8th largest state by area in the US.

The area was first inhabited by various Native American tribes more than 13,000 years ago. The eastern part of the Rocky Mountains was in earlier times a major route of migration for the spread of civilization throughout the American land. Apache and Comanche tribes inhabited the Eastern and Southeastern parts of the state. The region was acquired by the Union in the Louisiana purchase of 1803 from the French. The land achieved US statehood on August 1,1876, making it the 38th US state. Thus, the map of Colorado state was added in the American Map.

Almost rectangle-shaped,as shown in the Colorado Map, the state is landlocked and bordered by Wyoming, Kansas, Nebraska, Oklahoma, New Mexico, Utah and Arizona. The map of Colorado state covers the southern Rocky Mountains, the western most part of the great plains as well as parts of the Colorado plateau. Colorado was named after the Colorado River which passes through the state. It is also depicted in the map of Colorado. Northwestern Colorado is sparsely populated due to desert plateaus and alpine mountains. There are 53 summits of the Rocky mountain ranges in Colorado that are 14,000 feet or higher in elevation. Mount Elbert, at 14,440 feet is the tallest peak in the Rockies and the second-highest peak in the contiguous US.

Colorado is home to four national parks, each of which is distinct and offers its unique features of what makes the state beautiful. Some of the nation’s most remarkable natural landmarks are found within the boundaries of Colorado’s four National Parks and preserves (Rocky Mountain, Mesa Verde, Great Sand Dunes and Black Canyon of the Gunnison national park). Check this Colorado National Parks Map locating all the national parks in the US.

Colorado is a land of the dark forests of pine where the tropical stars shine. From outdoor adventure in national parks to bustling nightlife in cosmopolitan cities and welcoming towns as shown in the Colorado Map, it is the stuff vacations are made of. The state is famous for its part in the US history and heritage, unparalleled beauty, adventure winter sports, Rocky Mountain cuisine and pot tourism. Mesa Verde National Park, Garden of the Gods, Pike National Forest, Million Dollar Highway, Gunnison National Park and Colorado National Monument are some of the most popular tourist attractions in Colorado and are located on the map of Colorado. The state is worth a visit in any season for adventure sports such as skiing, backpacking, ballooning and white water rafting.