Houston, a global city, is the largest city in Texas by area as well as population. It comprises an area of 669 sq miles (1,730 sq km). 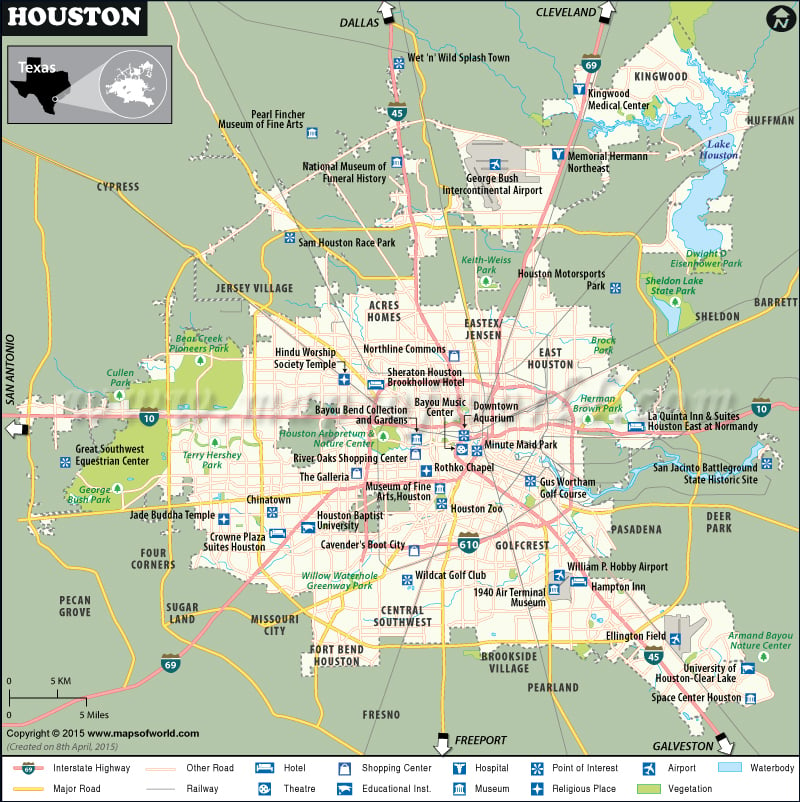 The map of Houston depicts some of the important attractions and infrastructure of the city. Infrastructure such as airports, roads, railway and interstate highways are clearly marked on the map. The user can easily identify the prominent attractions such as museums, theaters, shopping centers, hotels and points of interests. Other than this, hospitals, religious places, and educational institutions are also depicted.

The Interstate Highway is clearly visible on the map and so are the William P Hobby Airport and the George Bush Intercontinental Airport. Some of the popular hotels and inns shown on the map include Crowne Plaza Suites Houston, Hampton Inn and the Sheraton Houston Brookhollow Hotel. Other attractions that one can locate include Space Center Houston, Hindu Worship Society Temple, River Oaks Shopping Center, Downtown Aquarium, Gus Wortham Golf Course and Wildcat Golf Club to name a few.

From panhandle to gulf and counties to cities, Texas has a cohesiveness stronger than any other place in America. Everything’s bigger in Texas and so is Houston. Unlike other Southern cities, it has a certain lack of pretension – yet happening as ever – which makes a great selling point. With a blend of global appeal and Southern charm, the ‘Space City’ is the most diverse metropolis in ‘The Lone Star State.’ From its traditional roots of Southern hospitality to cosmopolitan culture, the fourth largest city in the United States is a galaxy in itself.

The city is located on the coastal plains near the Gulf of Mexico in southeast Texas in the US.

Unlike other cities in Texas, Houston’s weather is surprisingly pleasant, especially between October and early May. Most events and festivals occur during the more livable months around spring. When the city sizzles in summers and humidity reigns, even the locals seek shelter near the Gulf shores.

Places to Visit in Houston

Space Center – Ignore the temptation to say “Houston, we have a problem” here. For those who are keen on learning NASA’s space journey, putting on astronaut helmets, and exploring space with lunar simulators, this is arguably the best tourist attraction in the city. Only a 45-minute drive from downtown, it houses NASA’s Lyndon B. Johnson Space Center and the famous Mission Control Center.

Museum District – This pedestrian-friendly and tree-abundant neighborhood is one of the largest in the US with about 19 top-notch museums and galleries set within blocks of one another. The Museum of Fine Arts showcases works of Rembrandt, Picasso, and other European painters and its Cullen Sculpture Garden exhibits the works of Rodin and Matisse. Houston Museum of Natural Science houses dinosaur exhibits, Burke Baker Planetarium, Cockrell Butterfly Center, and an IMAX theater. Children’s Museum of Houston, Holocaust Museum Houston, and The Menil Collection are other prominent places to contemplate.

Wet’n’Wild SplashTown –Water slides, lazy river, swimming pools, and food court are all here in this 80-acre water park for multiple age groups. With entertaining rides like Brain Drain, Texas Freefall, Tree House, Big Kahuna, Zoom Flumes, it is a premier destination for a break from the heat.

Houston Zoo –Set in a 55-acre tropical landscape, the zoo is home to 6,000 exotic and indigenous animals of more than 800 species. Located inside Hermann Park, its highlights include giraffe feeding, interactive programs, and the Zoo Lights in holiday season.

Downtown Aquarium – It is home to over 200 species of aquatic animals. This 500,000 gallon underwater adventure complex includes touch pools, an aquatic carousel, Ferris Wheel, a white tiger exhibit and restaurant.

Come and live like a Houstonian for a few days: take in the breathtaking views of cityscape from Chase Tower, catch a light show at Rice University Campus after sundown, see the bats fly near Waugh Drive Bridge, attend a free movie screening at Discovery Green, dope out with street graffiti at Kingspoint Mullet, marvel at artwork of BAPS Shri Swaminarayan Mandir, take duck-faced selfies at Williams Waterwall, and wander in the historical Heights.

The banks of slow-moving waterway named Buffalo Bayou summon hundreds of outdoor enthusiasts for swimming, kayaking, biking, and picnicking. Take a 25-minute drive from downtown to devour fresh seafood, cruise through warm waters, and reflect at the Gulf Coast sunset in Clear Lake and Bay Area Houston – the boating capital of Texas.

Make sure to visit the Kemah Boardwalk with kids for amusement rides and waterfront dining. See prairie and bayou habitats on a pontoon boat cruise in Armand Bayou Nature Center or glide across a smooth bed of ice at Discovery Green park.

You may not be able to buy terracotta soldiers any more but buying cowboy attire, Native American wood statues, and bejeweled antlers are always a good option at Houston Rodeo. The Galleria in Uptown is where the style-savvy residents of H-Town shop, eat, and work. Being the largest shopping mall in the state, it has more than 375 shops with everything from Chanel to Armani. Browse the string of shops on Harwin Drive, where bargains galore, for designer lookalikes. Grab a bite to eat in an award-winning restaurant or go through the Tex-Mex cuisine scene one taco truck at a time.

With sleek lounges, laid-back dance clubs, and theater scene, the city comes to life after dark. For vibrant nightlife scene, head to the Theater District, city’s swankiest neighborhood, which revels in cultural bliss and stages anything from quintessential honky-tonk to contemporary ballet. For those looking for a rootin-tootin-hollerin good time, get to the popular Houston honky-tonks like Tin Hall, Whiskey River, Firehouse Saloon, and Gilley’s – where starched pants, cowboy boots, and belt buckles are de rigeur and country western music rules.

Hop on to The Wave – a jitney shuttle service – that takes folks around hot spots like Midtown, Washington Avenue, Montrose, Downtown, and Rice Village.