How is Thanksgiving Day celebrated in the US? - Answers 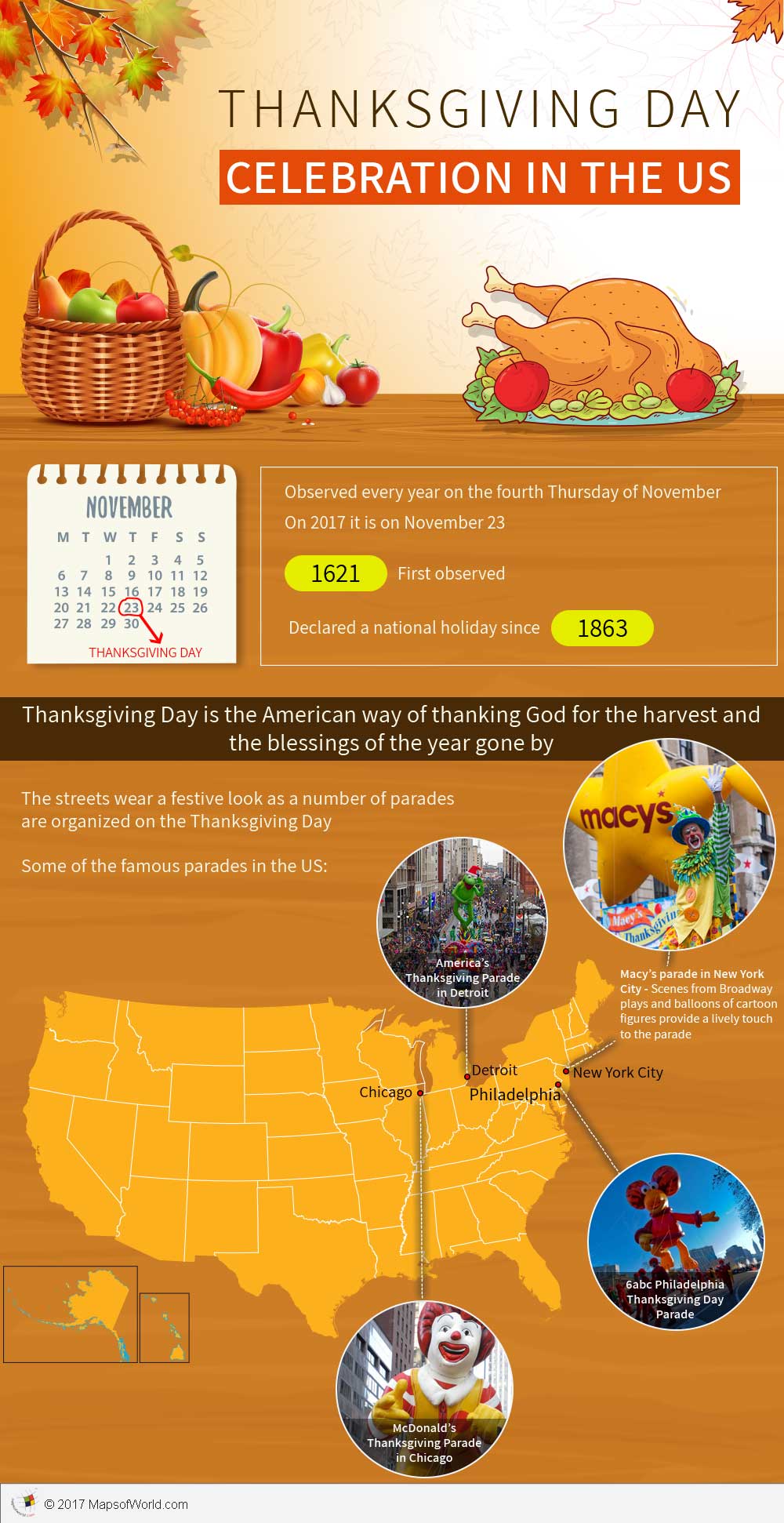 One of the most significant festivals in the United States, Thanksgiving Day is observed every year on the fourth Thursday of November, and in 2018 it is on November 22. It was first observed in 1621 and has been declared a national holiday since 1863. On this day people tend to catch up with family and friends, take part in parades, help the less fortunate, and of course relish the famous Thanksgiving turkey.

Thanksgiving Day is the American way of thanking God for the harvest and the blessings of the year gone by. Schools and offices around the country are closed and many of them give their students or employees a four-day holiday so that they can enjoy the festivities.

The fun-filled day sees the excitement and hectic activity as most of the people head home to be with their loved ones. The Thanksgiving Day weekend is considered to be one of the busiest days as flights and trains are flooded with people who work in other states and take the opportunity to spend the days with their family members.

Homes around the country witness frantic activity as elaborate get-togethers are organized. The tables are laid out with mouth-watering delicacies such as mashed potatoes, cranberry sauce, sweet corn, various kinds of vegetables, pumpkin pie and of course the sumptuous stuffed turkey, which, on this day, occupies an exalted status on every dining table around the country.

But for many Americans, it is also a time to associate themselves with charity work. The homeless and poor people are treated to elaborate free lunch and dinners which are organized by communities as well as individuals. Many corporations also do their bit for the poor and needy by distributing staple foods as well as organizing Thanksgiving dinners.

The streets wear a festive look as a number of parades are organized on this day. The Macy’s parade that is held in New York City is one of the most famous. Scenes from Broadway plays and balloons of cartoon figures provide a lively touch to the parade. Here you will also come across your favorite TV personalities and witness smart high school bands. Other popular parades held in the country include – 6abc Philadelphia Thanksgiving Day Parade in the city of Philadelphia, McDonald’s Thanksgiving Parade in Chicago, and America’s Thanksgiving Parade in Detroit, among others.

Many Americans also indulge in sports activity on this day. Football is one of the most important games to be played on Thanksgiving Day. On this day professional football games are held in many prestigious stadiums around the country. The regular season for many college football teams also comes to an end on this day.

So forget the cold snap, put aside all your worries and make most of the day by indulging in the festivities along with your family and friends.  US Restaurants Open on Thanksgiving Day