What are the things that foreigners love about the United States? - Answers 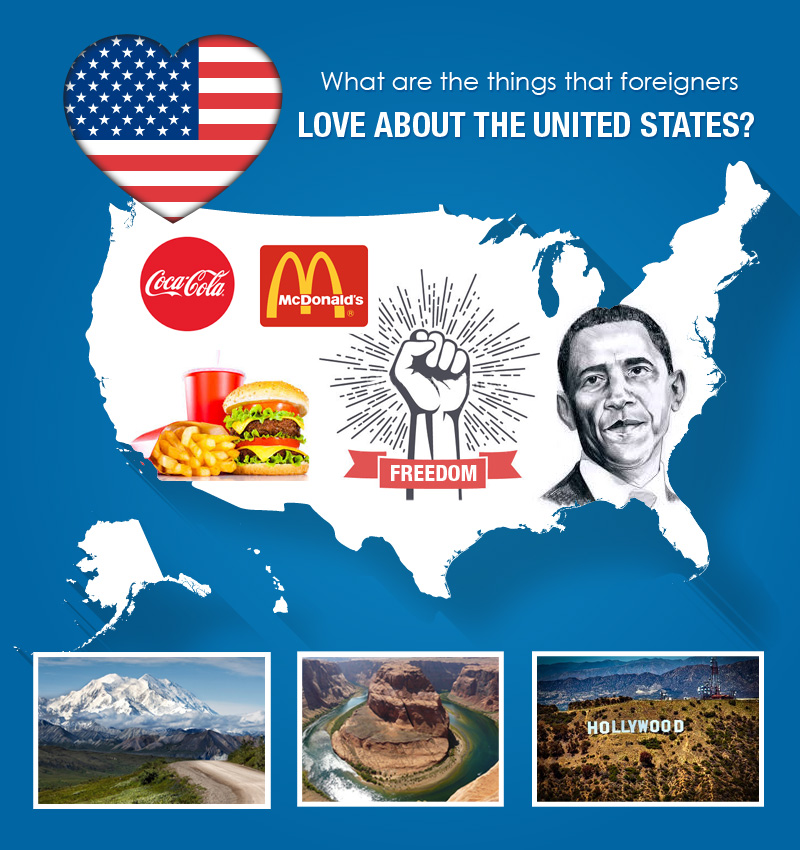 America has long been known as “The Land Where Dreams Come True,” and a nation that welcomes every individual, whether they are born American or they immigrate to become one, making the United States a destination for many foreigners. Though the United States is not without its faults (and some of these positive reasons are not true across the entire nation), for many, the reasons to love it outweigh the negatives.

A nation with a dark past of slavery and discrimination can finally boast the election of the country’s first black president. What better way to celebrate the diversity of the nation? From its cultural diversity to the geographical diversity and to demonstrating diversity even down to the entire grocery store aisles of breakfast cereal options – The United States of America’s diversification in every sphere is commendable.

The United States is strongly associated with brands from Coca–Cola to McDonalds that have made their way to every nook and cranny around the world today. From small towns to large cities, these names are synonymous with cold drinks and fast food, and are symbols of the spirit of innovation and can-do attitude that transcends America into a super power nation.

As the land of opportunities, the United States is one of the best nations in the world for invention and innovation, with a culture that offers the freedom and support to follow dreams and new ideas.

This ethos is further displayed in the smiles and warm greetings, like “Have a nice day” exchanged between Americans. And on the hospitality front, the friendliness of Americans, particularly in the South tends to make foreigners comfortable with their helpfulness and approachability. In addition to addressing others as “Sir” or “Ma’am,” it’s common to address others with their name, emphasizing the individualist and personable attitude in today’s culture.

Much of American culture has spread and become accepted worldwide, including blues, jazz, and lots of pop music, which are uniquely American. From movies, to music and dance – all forms of pop culture and entertainment made in America are consumed around the world. Extending on the same note, some great American TV shows are favorites among youth all over the world. From the Big Bang Theory to the WWE to classic Hollywood movies, people around the world are watching.

The importance of the Constitutional rights to freedom – freedom of speech, freedom of the press, of religion, and freedom to protest all continue to draw foreigners to immigrate or visit. Along with these rights, the concept of individual freedoms allows Americans to explore their passion and enhance it further, and become whoever they want to be, is what true freedom is.

The diversity of the United States is found in its people as well as its nature. From stunning coastlines to vast prairies, pristine lakes and massive mountains, this large nation has a bit of everything. The National Parks are some of the country’s best destinations, and the widespread experiences available across the nation can’t all be explored by even US residents in one go. It may take years to explore the whole country, and yet every time you visit there’s something new and exciting to experience.

The United States can also be termed “the Nation of Convenience,” thanks to the drive thru culture. Drive thru fast food restaurants and stores open 24/7, make living in a foreign country more convenient.

And finally, the American sense of national pride and the popular belief in the American Dream as well as the positive, friendly attitudes of many Americans makes many foreigners want to come to the United States.