Some Facts About USA 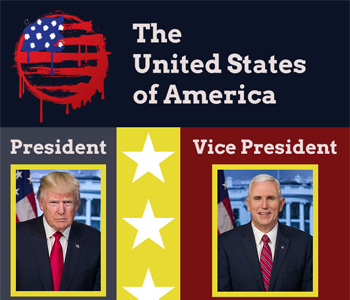 
Who is the President of the United States of America?
Donald John Trump

Who is the Vice President of the United States?
Mike Pence

How many states make up the United States?
50

Who did the United States fight for independence in the Revolutionary War?
Great Britain

What were the original 13 British Colonies?

Who was the first U.S. President?
George Washington

Who fought in the American Civil War?

What does the flag of the United States represent?

The U.S. flag has 13 red and white stripes, symbolizing the original 13 colonies. The 50 white stars on a blue background in the upper left corner represent the number of states in the union. Know more..

What are the colors of the United States, and what do they symbolize?

Where is the capital of the United States?

The U.S. capital is Washington D.C. (District of Columbia).

What type of government does the United States have?

The United States is a constitution based federal republic.

When is election day in the United States?

Election Day in the United States is on the Tuesday after the first Monday in November, which falls anywhere between November 2 and 8.

What are the capitals of the 50 states?

What currency is used in the United States?
The U.S. Dollar

What are the largest (most populous) cities in the United States?

What are the major mountain ranges in the United States?

What are the major rivers in the United States?

What oceans surround the United States?
Pacific (on the West)

Atlantic (on the East)

How many time zones does the United States have?
Six time zones: Eastern, Central, Mountain, Pacific, Alaskan, and Hawaii-Aleutian

Which state is the largest?
Alaska

Which state is smallest?
Rhode Island

What countries border the United States?
Canada and Mexico

Where is the highest point in the United States?
Mount McKinley, Alaska – 6,194 meters or 20,320 feet above sea level.

Where is the lowest point in the United States?
Death Valley, California – 86 meters or 282 feet below sea level

1. Ronald Regan is the oldest person ever to have been elected as the President of USA. He has also lived longer than any former President.

2. The first ever coast-to-coast telephone line in USA was set up in 1914.

3. Some of Mahatma Gandhi's ashes are at Lake Shrine, Pacific Palisades close to Los Angeles.

4. Known famously as Typhoid Mary, Mary Mallon was the first carrier of typhoid fever in USA.

5. The author of Star Spangled Banner, Francis Scott Key, was a lawyer.

6. John Tyler was the first US President to have got married while in office.

7. Martin Luther King Jr. and his father were both named Michael. When King Jr. was 5 years old both their names were changed to Martin.

8. The real name of General Ulysses S Grant was Hiram.

9. President James Garfield came up with an original proof of Pythagorean Theorem that was published in 1876.

11. Jimmy Carter was the first US President born in a hospital.

12. The American Girl Guides are also known as Girl Scouts.

13. President William H Taft was appointed the Chief Justice of Supreme Court 9 years after his Presidency by the then President Harding.

15. No star on US' flag specifically represents any state. There are actually no laws that state as to how they may be arranged.

16. American Indians received US citizenship after steps taken by the national government in 1924.

20. The first US space station Skylab fell into earth in 1979 in thousands of parts.

21. Harry Truman is the only US President of 20th century who did not have college education.

22.Northeastern US, and Canada, experienced snowfall and cold during the summer months in 1816, which is also known as the Year without Summer. A volcanic eruption in Dutch East Indies was blamed for this phenomenon.

23. The inventor of lubricator, Elijah McCoy, was an African American and used the name Real McCoy to differentiate himself from imitators. 24. During the War of 1812 the first rockets were used by the British against Fort McHenry.

28. Both Thomas Jefferson and John Adams passed away on July 4, 1826, 50 years after the Declaration of Independence was signed.

29. Phillus Wheatly, an African female slave, was the first poet in USA to achieve notoriety. Her first poem was published in 13.

30. Roger Sherman is the only shoemaker to have signed the Declaration of Independence.

31. Benjamin Franklin composed his epitaph at 22 years of age.

32. The first official concert of Rolling Stones in USA was held in June 1964 in San Bernardino, California.

33. Amelia Earhart was the first woman to fly across Atlantic Ocean both as a passenger and solo pilot.

34. George Washington commanded the first ever navy fleet of USA. Created in 1775 the fleet had 4 ships.

35. During the American Civil War most soldiers died from various diseases than fighting or gunshots.

36. Mark Twain was born and died on days when the Halley's Comet could be seen.

37. In 1954 General Motors became the first American company to have a net income of $1 billion.

38. US dollar bills are made from cotton and linen.

39. During 1971 cigarette advertisements were barred from US television.

40. People in US contribute almost 20% of the yearly global garbage generation.

41. The 100th anniversary of swearing in of George Washington, 30th April 1889, was the first holiday celebrated across USA.

42. The Declaration of Independence was written on paper made from marijuana or hemp.

43. John F Kennedy is the only President to have passed away before his parents.

45. Lake Mead is the biggest man made lake in US and has been created by Hoover Dam.

46. Almost 55.1% of prisoners in US are in captivity for drug related offenses.

47. Every bank in USA remained closed from 5th to 12th March 1933 so that scared people did not take their money out.

49. US had no income tax before 1913. The 16th Amendment was necessary so that government had control over people's money.

50. USA is almost the 4th biggest country in the world in terms of area.